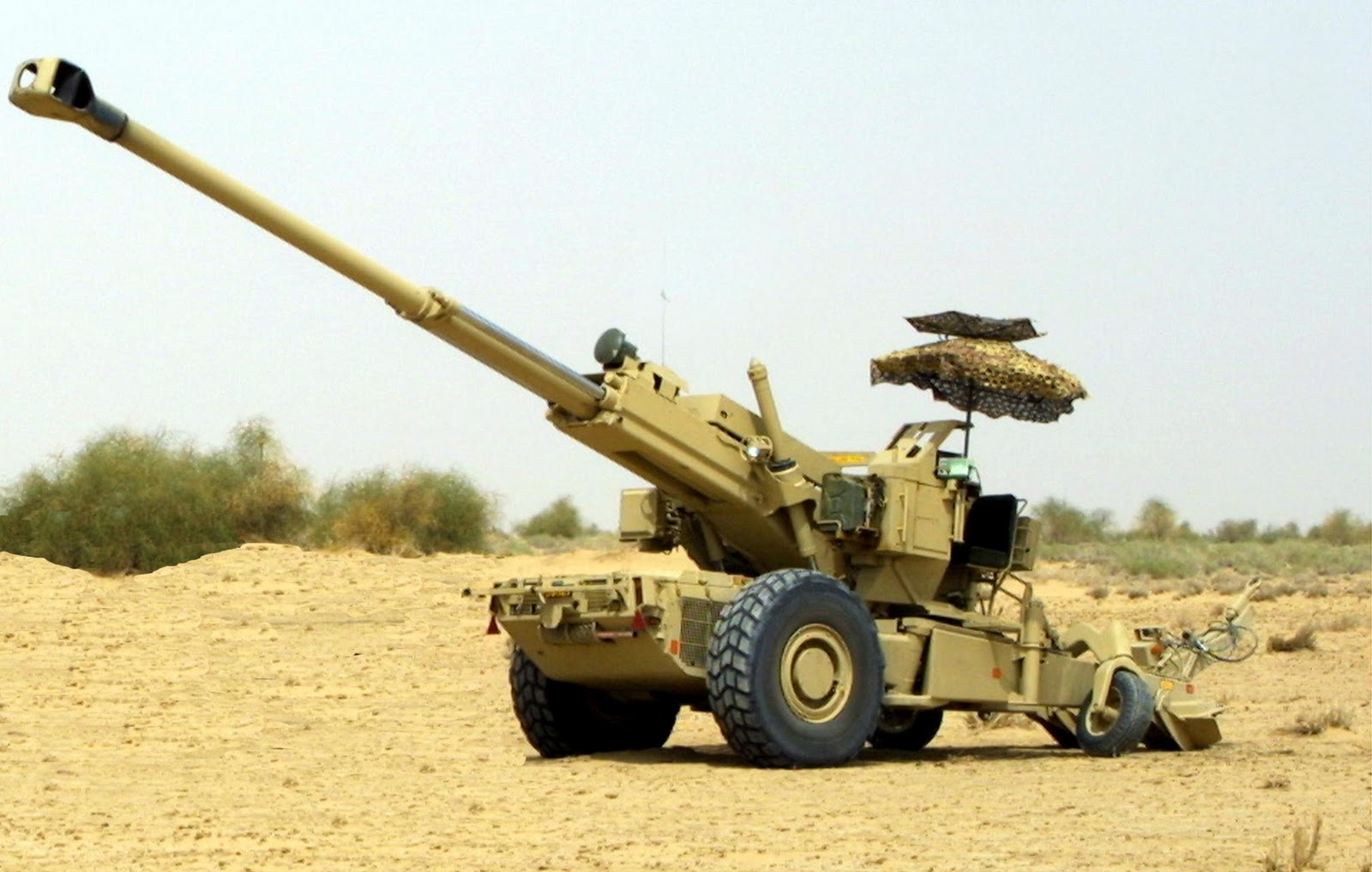 Napoleon had said, “Artillery is the God of war.” However the Indian Army’s artillery had been buried deep in a seemingly bottomless pit for decades. The Bofors ghost had disallowed modernization to progress with not a single gun being purchased since the scandal till as late as just weeks back when a mix of three models, all of them 155mm, the M777 Ultra Light Howitzer of BAE Systems, the tracked self-propelled K9 VazraT of L&T and OFB’s Dhanush were handed over to the Army.
The author addresses the full spectrum of artillery modernization, to include equipment up-gradation, new buys and a few in the pipeline. 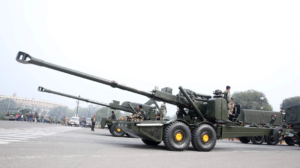 After nearly two decades of stagnation in its modernization and transformation plans, the prospects for the induction of approximately 2800 plus modern artillery howitzers of the 155mm/ 52 calibre finally look bright. The success of the indigenously developed 155mm 45 calibre Dhanush gun (upgraded version of the Bofors), the induction of the first six 155mm 39 calibre M777 Ultra-Light Howitzers (ULH) out of the 145 contracted for and the commencement of induction of the first  self-propelled (SP) tracked 155mm 52 calibre howitzer (K9 VAJRA-T) are positive developments indeed. The show casing of the indigenously developed Advanced Towed Artillery Gun System (ATAGS) during Republic Day Parade last year and recent reports of its achieving 40 km plus ranges during firing, are encouraging signs and auger well for the Artillery modernization process – their winter trials are scheduled this year.

There has also been a significant progress in the Artillery’s surveillance, target acquisition and retaliatory capabilities along with great strides being made in the field of rockets and missiles. However a major concern remains the sordid state of ammunition, both in quantity and quality, which is the main weapon of the Gunners.  This aspect was amply highlighted by the CAG in its report released last year. The recent decision of the Government to partially open this sector to the private industry, is a step in the right direction and needs to be pursued on priority. 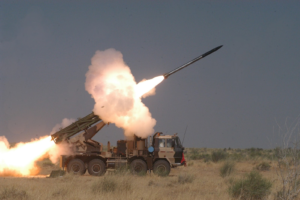 The artillery’s transformation plan includes purchase and manufacture of towed, mounted and ultra-light howitzers, including self-propelled  both tracked and wheeled, multi-barrel rocket systems, missiles, surveillance and counter bombardment equipment, including UAVs. The main highlight in this plan is the inclusion of the mounted gun system and wheeled self propelled artillery platforms. The mounted gun system provides a high level of autonomy and shoot and skoot capability and has a distinct advantage in the mountains due to its shorter turning radius compared to the towed gun. The wheeled self propelled gun is ideally suited for the plains and the semi desert terrain vis-a-vis the tracked version providing better speed and mobility at lesser costs – however this project has now been shelved and is not expected to be revived in the future. While the transformation related to rocket artillery (Smerch & Pinaka), missiles (Prithvi, Agni and Brahmos) and surveillance equipment (UAV’s and Weapon Locating Radar) is progressing satisfactorily, the area of concern remains the induction of roughly 2820 guns/ howitzers of all types, despite some significant movement forward. Six additional Pinaka MBRL units and one Smerch MBRL have been approved for induction by the Government.

The Dhanush gun being produced by the Ordnance Factory Board (OFB) has undergone extensive user exploitation trials in the desert and high altitude – a few defects/glitches noticed are being addressed by OFB.  Indent has been placed on the OFB by the MOD for 114 Dhanush Howitzers and orders for more numbers (300) could follow based on the performance of the gun. Another important development is the culmination of the process for the acquisition of the 145 BAE Systems M777 Ultra Light Howitzers (ULH), being acquired through the Foreign Military Sales (FMS) route with the United States – the two guns inducted initially are undergoing  exploitation trials.  BAE Systems has down selected Mahindra Defence Systems as its partner for the assembly, integration and testing of the 145 howitzers in India. While 25 ULH will be received in fully built up condition, the balance 120 guns will be assembled in India. This is a priority army project, keeping in mind the long outstanding inadequacy of artillery in the mountains on our Eastern and Northern borders.

The principle project to buy 400 x 155mm / 52 caliber towed guns followed by the indigenous manufacture of another 1180 guns which was stuck at the trial stage for the last two years, has undergone confirmatory trials and seems to be finally on track. In contention are the Elbit Systems (earlier Soltam) ATHOS 155/52 calibre and Nexters TRAJAN 155/52 Calibre Towed Gun Systems. The significant feature of these trials has been the involvement of major private sector defence companies who have tied up with the foreign vendors – Bharat Forge with Elbit and Larson & Toubro (L & T) with Nexter. With the ATAGS project also showing a lot of promise, there seems to be great hope for the future of towed gun systems, the main stay of Artillery. The ATAGS is under development by the DRDO with the involvement of private sector industry, namely Kalyani Group and Tata Power SED. This is likely to be the biggest indigenous project show casing the public-private partnership and furthering the spirit of Make in India. Two prototypes have been produced one each by Kalyani Group and Tata Power SED which are presently undergoing user trials in different terrains. While it has given ranges beyond 40 km the ATAGS is heavier than other comparable systems and the DRDO is working toward reducing the weight.

Another important project is the Mounted Gun System (MGS) involving off-the-shelf purchase of 200 x 155mm/52 calibre guns, followed by indigenous manufacture of another 614. Available in the world market are Sweden’s Archer, French Caeser, Bosnia’s Nora Gun Systems and the Indian entities of the MGS fielded by Tata Power SED and Bharat Forge. Latest reports suggest that OFB has also fielded a MGS based on a Dhanush gun of 52 calibre mounted on a 8×8 Tatra Truck produced by BEML.  Both Ceaser and Archer are combat proven gun systems having seen service in Afghanistan and Iraq. While the earlier AON given in Nov 2014 for the MGS has elapsed the army is trying to re-validate the project and get a fresh AON.  The RFP is expected to be issued thereafter. With so many players jockeying for this project, it will be interesting to see how it finally plays out – such a system will be a force multiplier for any army.

With regards to the tracked gun system, the 155m/52 calibre Korean Samsung Teckwin ‘K9 Thunder’ now called the K9 Vajra-T gun system is to be produced in India by L&T in collaboration with the Korean partner. This is a major development and will give a capability fillip to the Indian defence industry -there is a requirement of 100 x 155mm/52 calibre tracked SP guns and these numbers could increase with the wheeled SP guns project now being defunct. As per reports the first K9 Vajra-T has already been inducted. Under the contract 10 guns will be brought from South Korea and the balance 90 will be manufactured at L&T’s strategic systems complex at Talegaon near Pune. 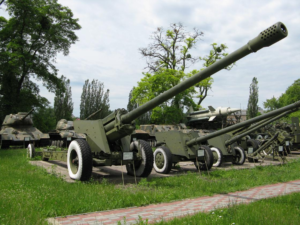 The up gunning of the130 mm/39 caliber M46 Russian guns to 155mm/45 calibre is another very significant project. While the plan was to upgrade a total of 480 guns, only 180 guns were upgraded earlier due to Soltam, Israel (firm involved in the upgradation with OFB) getting blacklisted by the MOD during this period. However the defence ministry has given approval for up gunning of 300 additional M-46, 130 mm/39 calibre guns to 155mm/45 calibre with the participation of the private sector in the tender process. The private industry has been approached to undertake this project in collaboration with a foreign vendor right from providing the required ordinance and accessories to the up gunning itself. Companies like Tata, L&T and Bharat Forge are the private venders involved in this venture- this process is already in progress.

The developments in the Rocket Artillery and Missile arena have been very encouraging. The upgrading of the existing vintage Grad BM 21 (Russian Origin), has made this 40 barrel rocket system more agile and lethal. The main modifications are related to a more powerful and modern mount and enhancement of range and accuracy. With the indigenously developed Pinaka MBRL System performing exceedingly well, six more regiments have been sanctioned to add to the existing four. There is also an ongoing exercise to increase the present range of its rockets from 40 to 75 km. This will greatly enhance the strategic value of this weapon system. These systems are once again being produced by Tata and L & T, pointing towards the greater involvement of private industry in defence manufacturing.  Brahmos, the long range cruise missile is being manufactured in India as a joint venture with Russia. The strategic value of this system is immense and further extension of its range beyond 290 km is already work in progress.

On the Surveillance and Target Acquisition (SATA) front, the two types of MALE UAVs, Searcher Mk 2 and Heron are already part of the Artillery inventory. In addition the development of the indigenous ‘Swati’ weapon locating radar (WLR) by the BEL is certainly a major achievement in the modernization and ‘Make in India’ process. This weapon system has already entered service and competes with the best in the world like the American ANTPQ-37 WLR- the Artillery has approximately 30x ANTPQ-37 in its kitty and is looking at inducting 28 SWATI systems.

As brought out earlier the inadequacy of ammunition remains a critical issue, for without ammunition the Guns and Rocket Systems are mere show pieces. The Kargil war exposed our vulnerability to ammunition shortage to sustain even a short term conflict.  It seems the Government has finally woken from its slumber and is addressing the issue on priority, especially by looking at procurement over the next ten years through public-private sector manufacturing. – the MOD has already issued RFP’s in this regard.

The Regiment of Artillery’s modernization and transformation process has finally been set into motion. The Government’s decision to involve the private sector in defence production and the focus on ‘Make in India’ and indigenisation, has given a major boost to this modernisation process. A number of private companies like L&T, Bharat Forge, Mahindra Defence Systems, Tata Powers, Reliance Defence and Punj Lloyd have taken the plunge and are forging JVs with renowned global defence equipment manufacturing companies, especially those related to manufacture of 155mm/52 caliber artillery howitzers of all types. Also in a major policy shift, licenses are being given to the private sector for development / production of certain type of ammunition like fuzes and charge systems – a very welcome step under the present circumstances. There is an urgent need to maintain this momentum to upgrade/modernise the artillery and ensure accelerated acquisitions to effectively redress the growing absoloscence of the Indian Artillery in the coming decade.