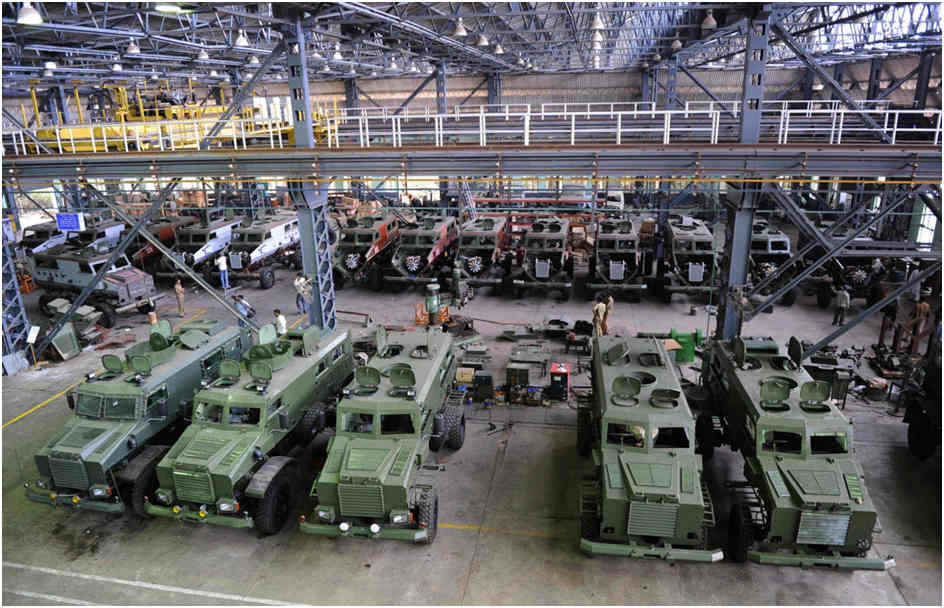 The issue of corporatisation of the OFB has raised the anticipated storm of protests. Over 80,000 employees, attuned to an easy life, with no accountability whatsoever, are up in arms. However, a political party is given an overwhelming mandate by the people of a country in order to empower them to engineer change and harness rapid progress. It’s also apparent that the government is keen to put the reforms through. The author explains the multiple facets of the issue.

The clarion call given by the Prime Minister on 12th May for a “Self Reliant India” amidst the Covid 19 crisis and the announcement by Finance Minister Nirmala Sitharaman on 16 May that the Ordnance Factory Board (OFB) would be corporatized could be a welcome change. However, since she also mentioned that it did not mean privatization and the corporatized OFB will remain under government control, indirectly implying Ministry of Defence (MoD), leads to inferences that nothing is likely to change.

Ordnance Factories are the oldest and largest organization in India’s defence industry with a history that dates back to 1787. There are 41 Factories divided under five clusters or operating groups which are supposed to produce a range of arms, ammunition, weapons, armoured and infantry combat vehicles, and clothing items including parachutes for the defence services. They function under the Ordnance Factory Board (Board) which is under the administrative control of the Department of Defence Production of the MoD.

Multiple government-appointed committees in the past suggested corporatizing OFB to include: TKA Nair Committee recommended converting OFB to Ordnance Factory Corporation Limited in 2000; Vijay Kelkar Committee also recommended corporatization of OFB with ‘Navratna’ status, like BSNL in 2006; and finally, Vice Admiral Raman Puri Committee (2015) recommended corporatizing OFB and splitting it into 3-4 segments – each specializing in distinct areas like weapons, ammunition and combat vehicles. The reason for committee after committee coming up with these recommendations have been the inefficiency and poor quality with time delays in delivery of item that has been ordered. However, no government or the MoD paid any heed to any of these recommendations despite the fact that huge resources were expended by these committees to come to these conclusions. So, why did we order these committees, if we were not to take any action on the same?

The CAG, year after year has brought out glaring shortcomings in the efficiency levels of the OFB. In its Report Number 19 of 2016 it brings out “Ordnance Factory Project Korwa was given the sanction (October 2007) by the Government of India, Ministry of Defence for manufacture of 45,000 carbines(which Indian Army needed to the tune of 1.8 lakhs) per annum at an estimated investment of “408 Crore”. This project was brought in by Mr Rahul Gandhi to his constituency. “The time schedule for implementation of the project was initially fixed as October 2010, which, on Congress losing the elections was revised to March 2017. Even after expenditure of 1253 crore, the project had not accrued any benefits to the Board”. Which actually meant that not a single item has been produced since then.

The story of Ordnance Parachute Factory Kanpur (OPF) Kanpur is even worst. OPF manufactures various parachutes for the Armed Forces. Users’ requirement of parachutes is of significant importance because of their strategic use in dropping fully kitted soldiers, supply drop, emergency escape of pilots from aircraft etc. In the audit conducted at OPFand OFB for 2012-13 to 2016-17 on production of 11 selected parachutes for the Army and Air Force to ascertain whether OFB supplied quality parachutes to the users in time and as per their requirements, glaring shortcomings were reported. “There were deficiencies in production planning like delays in holding target fixation meetings, non-identification of item-wise production capacity and production constraints/capacity shortage not highlighted in the meetings for fixing realistic targets. The targets were routinely revised downwards due to OPF’s inability to meet the target because of non-availability of quality metal components/fabrics etc. Out of 49 instances analysed, OPF achieved production targets only in five instances during 2012-13 to 2016-17”.

As a result, there were significant outstanding orders for nine parachute items as of March/April 2017. The users’ also had deficiencies of seven parachute items to the extent of 33 to 100 per cent. Bulk production of two types of Heavy Drop (HD) parachutes, developed by Defence Research and Development Organisation (DRDO) in 2000 and 2009 for Army and Navy could not be commenced due to delayed supply of pilot lot by OPF for validation trial.

Army’s requirement of Combat Free Fall(CFF) parachute, developed by DRDO in 2006, was not fulfilled due to life threatening defects observed by Army in validation trials and non-resolving of the quality problems by OPF. As the CFF Parachute directly impacts the operational efficiency of the Special Forces, Indian Army, after waiting for 19 long years, had to take the harsh decision of foreclosing this project and go in for purchase of a limited number from Foreign OEM’s. Because the OPF/OFB continue to claim that they shall make it, even expertise of Indian vendors who have manufactured parachutes for Chandrayan and landing capsules have not been allowed to be exploited.

The story of Army’s Combat uniforms, which the Indian Army proposed to procure privately at one third the cost and of better quality, with a saving of Rs 157.5 Cr annually having been turned down was covered well by media.  The high cost of items is due to the overheads cost as brought out by CAG, “The Cost of Overheads accounted for 36 per cent of the cost of production. The high overheads are a consequence of high committed cost on a workforce that is not directly deployed for production”. Consequently, not only that the services have suffered, but indigenisation itself has taken a huge step backwards.

Similar is the case with many other projects, as mentioned earlier in rims of paper and voluminous CAG Reports. Particularly on quality, the Report points out that, “No documented comprehensive quality policy has been laid down by the Ministry. Instead, piecemeal orders/instructions are issued by the Ministry and OFB. In the absence of an overarching quality policy, the existing quality structure lacks coherence and does not establish synergy needed for optimum distribution of responsibility and authority among the stakeholders in Defence Production”.It must not have been easy for MHA to taken a decision to go in for purchases of weapons for ITBP, BSF, CRPF, SSB, CISF, NSG and Assam Rifles from private source, for which, as per reports, the first round of discussions has already been completed with the vendors.

For the defence sector, ‘self-reliance’ has remained elusive for seven decades and India remains the second largest arms importer on the global stage. The imports have been resorted to not because Indian Armed Forces want imported equipment. In fact, the services have a genuine concern of the pitfalls of lifecycle support of any imported items also for any future upgrades, since the dependence is on an Original Equipment Manufacturer. Therefore, import dependence and consequent strategic vulnerability have long been an area of concern. Despite continuous efforts, indigenisation has remained a losing battle.

The private industry feels OFB doesn’t fear competing with them because the so-called level playing field isn’t level with OFB being a government organisation. Only some projects come to the private industry. Foreign Original Equipment Manufacturers (OEM) too prefer to team up with indigenous private industry, e.g., Kalashnikov was keen to team up with Adani Defence and Aerospace to set up the AK-203 assault rifles production in India. As on date even this project is held up at negotiation level between GOI and Indo-Russia Rifles Private Limited (IRRPL), despite the MoU having been signed in March 2019.

On 13 June 2020, Indian media broke the news that the joint IRRPL between the Indian Ordnance Factory Board (OFB) and Russian Rosoboron Export and Kalashnikov company has run into pricing problems. The Ministry of Defence (MoD) was reportedly forced to appoint a costing committee on 11 June,2020 due to the “unreasonable and unacceptable” price quoted by the IRRPL to make 6.71 lakh AK-203 rifles. The five-member costing committee, has been asked to fix a “reasonable price” for manufacturing the basic version of the 7.62×39 mm calibre AK-203 rifle. It seems the Joint Venture first sought repeated extensions to submit its techno-commercial bid and then when it did in February this year, it quoted a price much higher than the benchmark price.

A large number of Design and Development projects, despite having very good designs have turned out to be very bad products. 5.56 mm INSAS is just one of the many stories. Similarly, large numbers of foreign purchases of urgently required weapons and equipment have been scuttled by the OFB at the stage of Acceptance of Necessity(AON) by false claims that it can be manufactured by them. Forces have waited for years for such equipment to be supplied. Consequently, it has not only put the modernisation process back by many years but even optimal equipping has suffered. Hence, in every operational contingency like Uri, Balakot or Galwan, Indian Army has to go for emergency procurements for items as simple as assault rifles and ammunition.

The call taken by the Government on corporatisation to begin with is just a baby step and this must be pressed forward ruthlessly despite the 84,000 plus workers of the OFB having gone in for a nationwide strike against this initiative. This must also happen in the right earnest by revisiting the various committee reports and CAG reports. Indian Armed Forces are crying for self-reliance and Defence Industry is crying for indigenisation. If at all it has to happen, it can happen only now with a strong government and a wave favouring the “Atmamirbharata” call.

This must happen despite the OFB, as the organisation will only find self-serving ways and means at the cost of better equipping of the armed forces. This may warrant a harsh decision of allowing participation of private industry with level playing field even in those core areas where OFB has claimed sole rights since ages but has failed with much loss to the exchequer and the Armed Forces. The decision will have to be political and executed ruthlessly.

Lt Gen JK Sharma is a scholar warrior and senior strategic military leader with close to 42 years of service. An expert on Siachen with two tenures and Ladakh, three tenures, he also took part in counter-insurgency operations in Punjab, J&K and North East. He is an expert on Information Warfare and was part of many committees on the subject while in service. As part of the Directorate of Military Operations for over five years at different levels he has seen through Kargil War, Operation Prakaram, Uri, and many crisis situations of internal conflict and Out of Area Contingency Operations including hostage crisis of Sierra Leone and Lebanon.