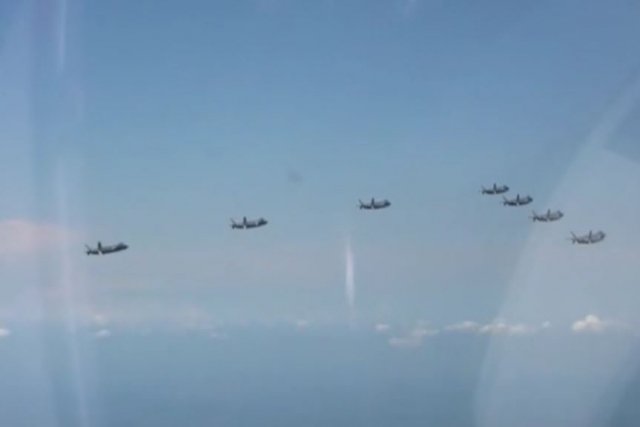 A couple of weeks after the US approved sale of 66 F-16 jets to Taiwan, China’s People’s Liberation Army- Air Force (PLA-AF) showed off a formation of seven J-20 stealth fighters in an official video.

State television showed a video released by the PLA-AF showing seven planes taking off and flying in formation during a night sortie. The message seems aimed squarely at Taiwan which recently received a US State Department approval for 66 F-16s of the latest Block 70/72 standard which come equipped with the latest phased array radar, data links and electronic countermeasures.

The message behind showing seven J-20s could be that China’s military is already operating a considerable number of J-20s, “which could achieve regional aerial superiority and destroy the enemy’s strategic facilities deep in hostile territory,” Global Times said quoting unnamed experts.

Wang Ya’nan, chief editor of Aerospace Knowledge magazine, told the Global Times on Tuesday, “a considerable number of units are probably ready to fly the J-20.”

The PLA-AF has not disclosed the total number of J-20s at its disposal.”If seven J-20s are sent simultaneously into battle, they would have a significant striking capability with their air-to-air and air-to-surface weapons,” Wang said.

The Chinese J-20s could achieve regional air superiority and destroy enemy strategic nodes deep in hostile territory.”To truly achieve peace, defending our homeland is not enough. We must not only defend but attack,” said Yang Wei, J-20’s chief designer, in the video.