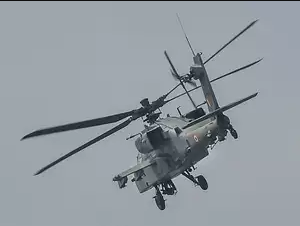 PATHANKOT: Giving a fillip to the Modi government’s ‘Make in India’ initiative, a major component of the Apache attack helicopters for the Indian Army will be made indigenously.

The fuselage of the six Apaches for the army will be made at the Tata Boeing Aerospace Limited (TBAL) facility in Hyderabad, Salil Gupte, President, Boeing India told ET. He also said that the fuselages for a global demand of Apaches will also be made at the facility.

India on Tuesday became the 16th country to procure the Apache when the Indian Air Force (IAF) inducted eight of them at the Pathankot Air Base. The IAF is using the latest version of the Apache known as AH-64E. This variant is flown by the US Army. Other customers of the Apache are the UK, Israel and Japan. Since 1984, the US Army and other nations have received more than 2,200 AH-64 Apache helicopters.

“The fuselage being made in Hyderabad are for global orders and the six Apaches fo ..