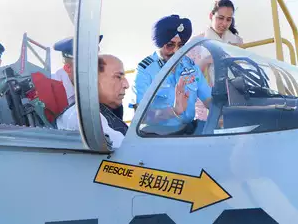 TOKYO: Union Defence Minister Rajnath Singh on Tuesday visited the Hamamatsu Air Base in Japan’s Shizuoka Prefecture, where he was briefed on the functioning of F-15 fighter aircraft and Kawasaki Trainer plane.

“At the Hamamatsu Airbase in Japan, I had a good look at the functioning of F-15 and also spent some time checking out the trainer plane,” the minister tweeted.

The Defence Minister took a Shinkansen bullet train from Yokohama to reach the airbase.

“India is also working on a bullet train project with Japan’s active collaboration,” he said.