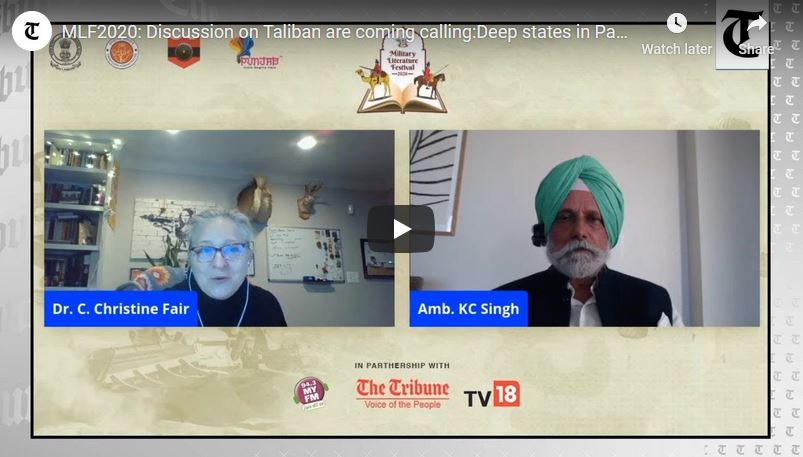 Civil war could break out in Afghanistan as it is being handed over back to Pakistan: Christine Fair

Political and military affairs expert Dr C Christine Fair and former ambassador KC Singh discussed looming situation in Afghanistan after the US troops would move out and its repercussions in the session on ‘The Taliban are coming calling: Deep states in Pakistan and India and Role of Media’ during Military Literature Festival 2020 here on Friday..

Dr Fair said after US troops move out of Afghanistan, the real issue would be of air power.

“Afghanistan would need air support. Having said this, the troop withdrawal would happen. The problem is we (the USA) are handing over Afghanistan to Pakistan,” added Fair, while pointing out flawed US policy for the last 20 years in the region where no serious effort was made to curtail Pakistan has been made.

She also pointed out the issue of funding for Afghanistan. Singh said that once the USSR broke down and couldn’t fund Afghanistan, the government fell down.

“India could play a role here. Earlier, India and Iran had supported the Northern Alliance. Emirates and Saudis are upset with Pakistan. The US has to work with Iran but elections are coming up there. These fractures are working in favour of the Taliban,” he said, while highlighting that the Chinese presence in Ladakh would close some options for India.  Read more…