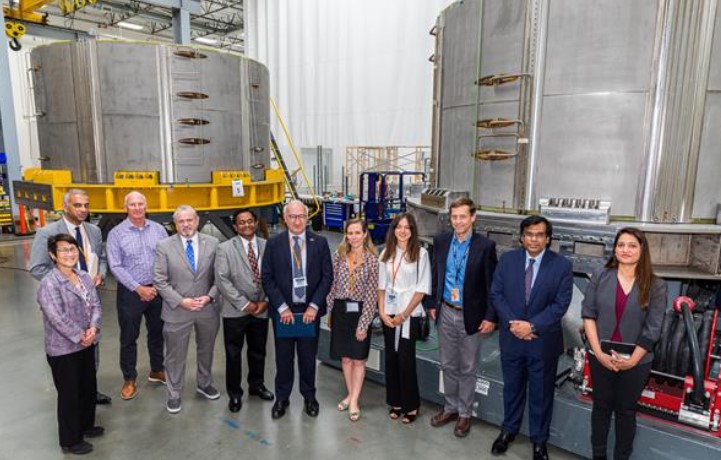 Philippe Étienne, Ambassador of the French Republic, visited General Atomics (GA) and toured the Magnet Technologies Center, a cutting-edge production facility in Poway, California this week where GA is fabricating the Central Solenoid Modules for the ITER project. ITER is an international collaboration of 35 nations that will prove the feasibility of fusion as a means of producing virtually limitless clean, safe, and sustainable energy, the statement stated.

During the visit, which was arranged and hosted by Dr. Vivek Lall, Chief Executive of the General Atomics Global Corporation, Ambassador Étienne saw several stages of the Central Solenoid fabrication process where modules are undergoing the final phases of construction. Joining Ambassador Étienne was Julie Duhaut-Bedos, Consul General of France in Los Angeles.

“It was a great privilege to host Ambassador Étienne at General Atomics to showcase the full range of our capabilities in the defense, energy, and technology sectors,” said Dr. Lall. “General Atomics is proud of its strong collaboration with France. This visit provided an invaluable opportunity for Ambassador Étienne to see a few of our facilities and learn more about our other areas of expertise,” he added.

“General Atomics and French organizations have a strong relationship in both the Defense and Energy sectors, as well as in the unmanned field, that meet both France’s and the United-States’ important interests,” said Ambassador Étienne.

“I was deeply honored to welcome Ambassador Étienne to the Magnetic Technologies Center at General Atomics to see our fabrication process first-hand,” said Dr. Anantha Krishnan, Senior Vice President of the Energy Group. “General Atomics is fabricating the most powerful pulsed superconducting electromagnet ever built, for ITER, and we are proud to play this integral part in the quest for fusion energy. Having recently returned from visiting the ITER facility in France, I was pleased to show Ambassador Étienne how General Atomics is playing a key role in the success of this ambitious project.”

According to the statement, the Central Solenoid is a critical component of the ITER experiment. Fully assembled, this massive magnet will be 59 feet tall, 14 feet in diameter, and weigh a thousand tons. Often referred to as the “heart of the ITER facility,” it will drive 15 million amperes of electrical current that will be used to shape and control the fusion reaction.

“ITER is the largest scientific experiment in human history, with the top talent from across the world working together to ensure its success. It truly is an honor to be part of this effort.” said John Smith, Senior Director of Engineering and Projects and Program Manager for Central Solenoid Module Fabrication. “The design of the Central Solenoid is complex, and we are bringing the full weight of GA’s expertise in engineering and precision manufacturing to this project to ensure its success. I am deeply appreciative of Ambassador Étienne’s support as we complete this project and eagerly await the first plasma at ITER.”

The Central Solenoid modules are being manufactured under the direction of the US ITER project, managed by the Department of Energy’s (DOE’s) Oak Ridge National Laboratory. Under the ITER agreement, all members share equally in the technology developed while funding only a portion of the total cost. The United States is contributing approximately nine percent of ITER’s total construction costs.

The Central Solenoid is one of 12 hardware systems that US ITER, funded by the DOE’s Office of Fusion Energy Sciences, is providing to the project. Most of the funds appropriated by Congress for ITER are used to support high-tech jobs and manufacturing in the United States by funding in-kind contributions like the Central Solenoid.

It takes two years to complete a single module using a range of specialized manufacturing capabilities. Two of the seven Central Solenoid modules have arrived at the ITER facility in France. The additional modules, including one that will act as a spare, are at various stages of fabrication. The Central Solenoid will be assembled as the modules arrive on site in support of the assembly of the device in preparation for first plasma, the statement disclosed.