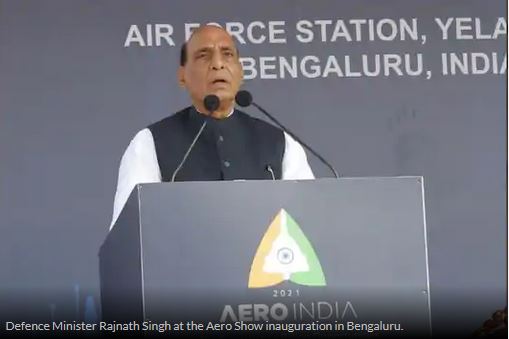 India is vigilant in the face of attempts to change status quo at its border and prepared to defeat any misadventures to defend its territorial integrity, Defence Minister Rajnath Singh said on Wednesday, amid the continued military standoff with China. “We have long witnessed unfortunate attempts to employ force to change the status quo at our unresolved borders”, he said at the inaugural ceremony of Aero India-2021, the country’s premier Defence and aerospace show, at Yelahanka Air Force Station here.

“India is vigilant and prepared to counter and defeat any misadventures to defend our people and territorial integrity at all costs,” the Minister asserted. China and India are locked in a military standoff in eastern Ladakh since May 5 last. The two countries have held several rounds of military and diplomatic talks to resolve the face-off, but no significant headway has been made so far.

Dubbed as Asia’s largest military aviation exhibition, the three-day Aero India event commenced amid the COVID-19 pandemic with buzz around “Aatma-Nirbhar Bharat” (self-reliant India) and “Make in India” push. With a combination of both physical and virtual exhibition, the 13th edition of the biennial international event is said to be the world’s first hybrid aerospace show.

Singh also said India plans to spend USD 130 billion on Defence modernisation in the next 7-8 years with the focus on domestic manufacturing of bigger and complex platforms. The government has since 2014 brought in many reforms in the defence sector to create a conducive ecosystem for exports, Foreign Direct Investment and offset discharge, he noted.Read more…