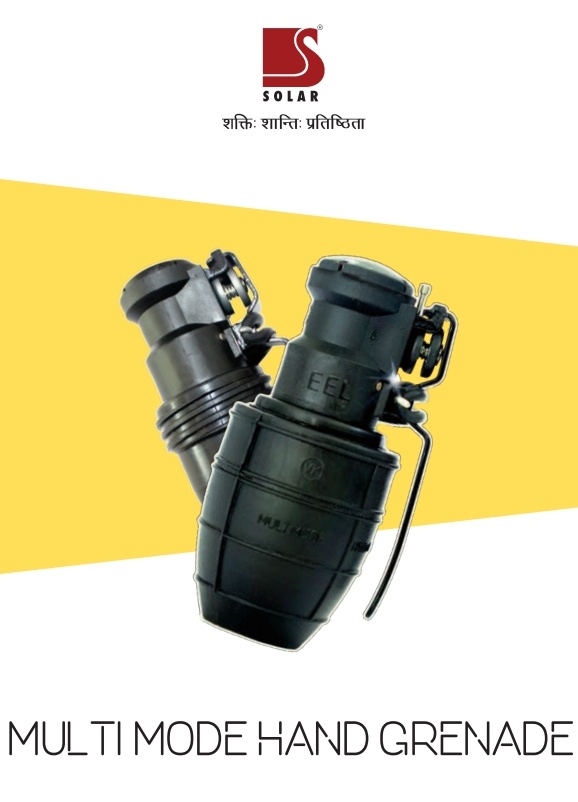 Indian defence major Solar Group becomes the first private company to bag contract for the supply of hand grenades to replace a vintage designin use with the Indian Army. Providing further boost to the ‘Make in India’ initiative in the defence sector, Ministry of Defence (MoD) on 1st October signed a contract with Nagpur based Economic Explosives Ltd (EEL) of Solar Group for supply of 10,00,000 Multi-Mode Hand Grenades (MMHG) to the Army at an approximate cost of Rs. 409 crores. The contract for supply of the modern hand grenades, is spread over a period of two years.

The contract marks the first time that a privately owned company will supply the armed forces a completely built ammunition, reducing single source dependency onthe OFB. These new grenades will be supplied to the army and air force to replace Grenade No 36,a World War II vintage design that is currently in service. The MMHG can be used in fragmentation and stun modes and has a proven accurate delay time and high usage reliability.

“The MMGH have highly accurate delay time, very high reliability in usage and are safe for carriage. Economic Explosives Ltd. had taken the technology in 2016, absorbed it successfully, while maintaining very high quality in detonics. Extensive trials were successfully undertaken by the Indian Army and DGQA in 2017-18 in plains, deserts and high altitude over summer and winter,” said SatyanarayanNuwal, Chairman, Solar Group.

“The MMHG case showcases how private-public partnership can deliver results very successfully for the vital defence sector in just a few years. It is for the first time in India that a privately owned company would be getting to supply an order for complete ammunition. Over the last decade EEL has created a niche for itself in the field of emerging technologies for modern munitions, adapting these for production, setting up specialized manufacturing plants and successfully adapting many indigenous designs for an initial product line-up of about 20 munitions for our Armed Forces and for exports,” added Nuwal.

The Multi-Mode Hand Grenade has been designed by DRDO/Terminal Ballistic Research Laboratory (TBRL) and is being produced by EEL, Nagpur.While there is a significant domestic demand for the MMHG, with India looking at becoming an export destination, the order could open up the international market for EEL as well. EEL is part of the Solar Group, which has set up a 2,000 acre facility for manufacturing ammunition and high energy materials in Nagpur, the biggest such project undertaken by the private sector.

The grenades being ordered by the Army and the IAF showcases public-private partnership under the aegis of DRD, thereby enabling “AtmaNirbharta” in ammunition technologies and accomplishes 100 per cent Indigenous Content, in the bargain.