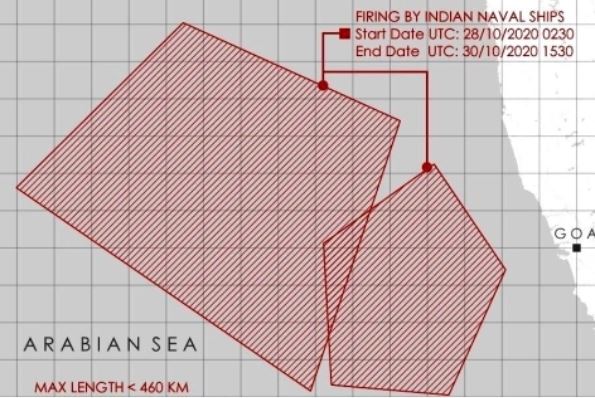 India has issued an area warning notification for firing by Indian Navy warships in the Arabian Sea between 28 and 30 October. Another notification has been issued for a known air to air firing range and a target towing range in the Bay of Bengal for a window starting 27 October and ending 10 November.

A notice to airmen and marines is issued by countries when they intend to test weapons. These warnings notify “closure areas” because of a hazard due to weapons testing to navigation or aircraft in flight.

The Arabin Sea notification, issued for an area near Goa and parts of Maharastra and Karnataka, covers an area of 25,220 square nautical miles. The Bay of Bengal notification covers two separate areas near Odisha.

This development comes just days after India tested BrahMos supersonic cruise missile from INS Chennai, an indigenously built stealth warship of the Indian Navy. The missile was tested in the Arabian Sea on 18 October.Read more…