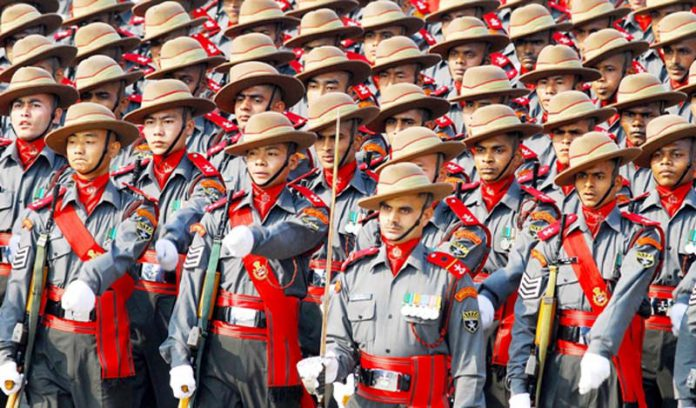 A Tug of War for Assam Rifles

Not willing to sort out the issue at their level, Secretaries of both the ministries have apprised the Court that they will accept the decision of the Cabinet Committee on Security (CCS).

This issue, pending for a long time, comes up every now and then because of peculiar circumstances and rules under which the Assam Rifles has been operating. A bit of recap is in order here to understand the background.

Since 2001 when the Kargil Review Committee studied India’s Border management posture, the issue has been in the public domain. In its report the KRC recommended that, “The entire issue needs detailed study in order to evolve force structures and procedures that ensure improved border management and a reduction, if not the elimination, in the inflow of narcotics, illegal migrants, terrorists and arms”.

The Group of Ministers (GoM) formed as a follow up to the KRC report, made specific recommendations for the Assam Rifles. It said, “In order that the Assam Rifles may be able to play its role effectively, it should be placed under the complete control of the MHA. The DG, Assam Rifles should be selected and appointed by the MHA and report to it directly”. The GoM was possibly following an oversimplified model that called for ‘one border, one force’ in order to fix accountability.

It clearly did not take into account peculiar features and terrain that obtains on different border. Obviously the Line of Actual Control to the North, Line of Control in J&K, the IB along our west and the borders of our northeastern states cannot be guarded the same way nor is it being done so, currently. Further, the utility of AR, a para-military-force as opposed to a police force, along our volatile north east borders, and its potential in hot war situations, were possibly not fully appreciated by the GoM.

It would be prudent to take a historical perspective of AR to understand the full potential of its utilization. Assam Rifles, traces its beginning to 1835 when it was raised as Cachar Levy. It’s current strength is 46 battalions. 80 per cent of its officers are from the Army, while the balance 20 per cent are promotes from the ranks.

To their credit, AR battalions have participated in the 1962 Sino-Indian operations and even the Indian Peace Keeping operations in Sri Lanka. In 1966, when the MNF uprising overran the state, it was only the AR battalion at Aizwal that held its ground providing a foothold for launching operations to beat back the insurgents. It also allowed the use of IAF resources from within the state.

During the 1971 Bangladesh War, AR relieved regular army units in the northeast for employment in erstwhile East Pakistan. A few AR battalions were deployed in Sri Lanka during Operation Pawan in 1987. AR units were deployed in J&K during the initial stages of the insurgency. During Operation Vijay in 1999, AR battalions manned the Line of Actual Control with army formations moving out to the western theatre.

Then there is the question of ethos, tradition and practices followed by the Assam Rifles. Since 80 per cent of AR officers are from the army, the organization has developed military ethos in sync with the Indian Army. In the words of Lt Gen Shokin Chauhan, retired Director General AR, ‘Incidentally, it’s these intangibles like ethos of a battalion, morale and ethics that have decisive influence on the operational efficiency of a force. The best of equipment and training cannot bring about the culture of sacrifice for achieving victory in battle”.

So the question is: What would placing Assam Rifles under the MHA achieve? Former DGs and officers who have worked in the AR feel, making the organisation a pure police force will dilute its operational efficiency. It takes years to build a battalion and hardly any time for the force’s combat capability to slide without the strong leadership and environment that is required to sustain the state of morale.

As is also evident from the history of employment of the force, it has been utilised in hot-war scenarios to take on priority tasks in the depth and also hold lesser threatened sectors where the army units and formations had been relieved. Such arrangements require very agile units that have the grit and determination as well as training to undertake such frontline tasks.

The role of the AR as given on its web site reads: “Conduct counter insurgency operations in the north-east and other areas where deemed necessary, under control of the army. During peace and ‘proxy war’, ensure security of the India-China and India-Myanmar borders. During war, rear area security in the TBA (Tactical Battle Area). Act as penultimate interventionist force of the central government in internal security situation, under the control of army; when the situation goes beyond the control of central paramilitary operations”.

Close to a 900 officers of the Army serve in the AR and gather experience in counter insurgency operations at any one time. The army provides its own resources to the AR whenever required. Such resources include intelligence, aviation effort, medical and engineering support. The AR has an umbilical connect with the Army. Given this long tradition and practice, hopefully the CCS will ensure that at the minimum, the current arrangement is continued with, or better still, both administrative and operational control of AR is given to the Army.