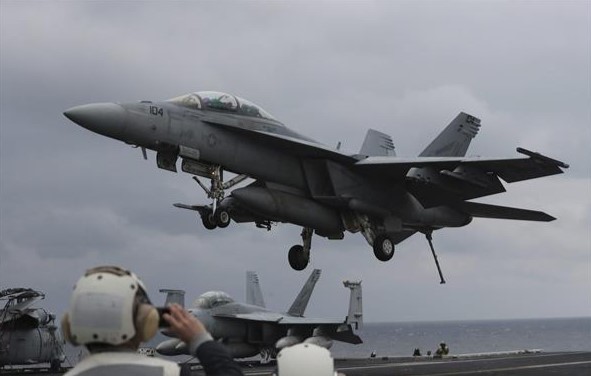 Global aviation major Boeing has offered its F/A-18 fighter jet for sale to the Indian Navy and pledged that the selection of the jet would help boost investments in the country’s defence industry on the lines of the government’s ‘Make in India’ and “Atmnirbharta’ (self-reliance) pitch.

“Boeing anticipates $3.6 billion in economic impact to the Indian aerospace and defence industry over the next ten years, with the F/A-18 Super Hornet as India’s next carrier-based fighter,” said Salil Gupte, President, Boeing India, during a media briefing in the capital on Wednesday.

Boeing plans to build on existing investments in India with the contributions of the Hornet Industry Team (HIT), comprising other American companies General Electric -makers of jet engines, Northrop Grumman- logistics and maintenance provider and Raytheon – makers of radar systems and weaponry. These companies claim that they were ready to deliver and cater to the Indian demands.

Making a strong pitch for the jet for India’s naval carriers, Steve Parker, Vice President, Bombers & Fighters, Boeing Defense, observed that “the F/8-18 Super Hornet is best in class in the world, and it will be a game-changer for India. The Block III Super Hornet we offer to the Indian Navy has the most advanced and critical capability. With its open architecture design and continuously evolving capability suite, the Super Hornet will outpace current threats, facilitate rapid credibility insertion, and has unmatched affordability. The Indian Navy will benefit from these investments for decades to come”.

As the Indian Navy gets ready to commission the country’s first indigenous aircraft carrier – INS Vikrant – earlier next month, Boeing claims the fighter jet is ideal for India’s naval carriers. Recently in June, Boeing demonstrated the super hornet to the Indian Navy in Goa. The company is yet to secure an order for the jet from the Indian Navy.

The Indian Navy is expediting a trial report into an operational demonstration by the two companies – Rafale M of French firm Dassault Aviation and the F/A-18 Super Hornet. The Navy hopes to move the proposal for 26 new fighters to the government by the end of this year.

“The Super Hornet Block III has been built for carrier aircraft operations, and it is the fighter that the US Navy depends on for its operations,” said Gupte.

Making a further pitch as the right solution for India, Alain Garcia, Vice President, India Business Development, Boeing Defense, said, “designed from its inception as a carrier-based fighter for high-loading, high-stress operations, the F/A-18E/F Super Hornet Block III will bring advanced, next-generation capabilities that will help the Indian Navy meet emerging and future threats. In addition, the Super Hornet will significantly benefit India’s defence sector, along with the contributions to the Indian economy by our Hornet Industry Partners – General Electric, Raytheon, Northrop Grumman”.

Asked how fast Boeing can deliver the aircraft if a contract is signed, Parker said they would deliver it within three years, depending on the Indian Navy’s requirement.