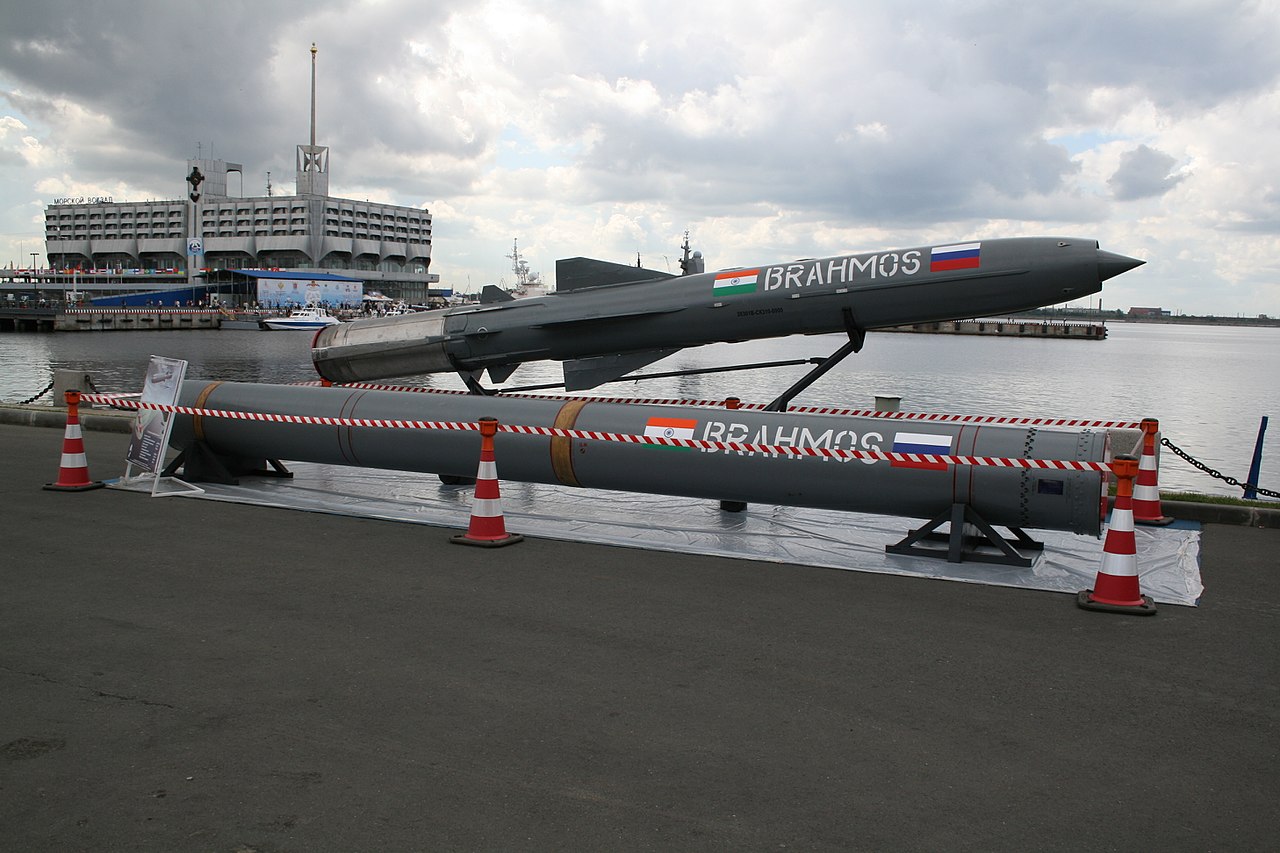 These are quotes edited for space and understanding. For the whole context, watch the complete discussion here:

It is a big development. It is a development that has significance both in terms of our defence capabilities domestically, as well as in terms of our relationships with other countries and the role that our defence capabilities can play in furthering our strategic and other goals. It symbolizes the overcoming of what one can perhaps call strategic hesitancy, which has characterized a lot of our decision making in the past and also overcoming to a great extent technological backwardness in the defence manufacturing sector. The two seem to have come together in this particular contract.

BrahMos: Best in the world

No question (BrahMos) that it is probably the best and the fastest cruise missile in the world. When you have a good product and when you have achieved technological superiority then naturally there will be recognized and there will then be demand. This is a great feather in our cap. These things don’t happen easily. The joint venture was created in 1999. It’s taken 23 years for the first export to be contracted. If we go beyond this particular missile, which has many variants.

In the last few weeks, we have seen two successful tests. One was the naval variant and the other ones launched from Chandipur with higher technological specifications. This missile itself has so many variants both in terms of range as well as in terms of the domain from which it can be used. But in addition to this, it is a fact that the Indian missile programme has definitely matured.

Ever since the launch of the famous Integrated Guided Missile Development Programme of 1982. So when you have persevered and done a lot of hard work and a lot of it quietly with a mix of both success and failure, and you finally arrive at a stage where you have a product that has been introduced in all the three armed forces of India. And it has demonstrated its progress at all international shows and met the highest standards, it’s a great tribute to scientists and technologists and policy planners. I know for a fact that the Brahmos Corporation has been ready to sell for a long time. And it’s very interesting because if you talk to those people and the management, they are very proud and very confident of the product. And they have no doubt in their mind that what they have to offer is the best in the world, which is why this missile was inducted without much fuss in all the three services and today it’s in deployment, whether it’s from aircraft, sea, and land.

This is probably an explanation for why it has gathered so much recognition across geographies and generated so much interest.

India is going to get into defence exports in a very big way. This is a decision that has been taken. The Prime Minister has set a target of $5 billion by 2025. But obviously, our defence export activity is going to be perfectly in conformity with international laws and treaties. So, whether it is the MTCR or any other treaty, we will ensure that whatever we do falls within the remit. The scope is there with demand and what we can supply technology. We will have to comply with MTCR obligations. There is no leeway in that.

We are not in the business like some other countries, who actually do a lot of cutting corners and doing things by subterfuge and by cheating. Whatever we want to do is going to be very much transparent. It’s not just the BrahMos that is available. I mean, there is a whole menu of missiles that we have developed and for example, the Akash, the Nag, the LCA. There is a big variety, a big menu of capabilities that actually have been deployed and are available.

Facts tell us, when you look at the largest defence manufacturers in the world or the largest defense exporters, there are only a handful of them. All of them are industrialized powers. Defence exports can’t happen in a vacuum. You have to have the domestic capabilities before you begin to export. The two go hand in hand.

The decision taken in India is that we must make up for lost time by ramping up our manufacturing industrial base, by ramping up our technological progress and pace which also translates into what we want to do in the defence sector.

Historically, the defence sector has played a pivotal role in the industrial transformation of almost all major countries and economies. When you put the two together, which is your desire to ramp up manufacturing, your desire to ramp up national power, and grow rapidly, the role that the defence sector can play, then you realise that you also have to then get into the business of making sure that what you produce is internationally competitive, and is as per international standards, because you do not want to equip your armed forces with substandard equipment.

The moment you start doing this you also keep an eye on the export bucket and the world around you. And there is this feeling that India must, given its resources, its attributes also get into defence exports. We started with say software exports a few decades ago. You can’t keep exporting primary goods, raw material and agricultural commodities or even semi-finished products and expect to then help yourself domestically. In today’s day and age, your national competitiveness and global competitiveness are very closely interlinked.

When I said strategic hesitancy, what I meant also apart from the economic part of it was also the strategic part, where if you have something which is good, which is proven, which is of exceptionally high quality, and you have buyers for it, then why should you not enter this market and in that sense, you leverage your competencies to achieve other larger strategic goals. Like any other country in the world, like any other major player in the world, there is no real reason for us to hold ourselves back as long as you have the capability. And it’s a bit of a cyclical or rather, I would say a circular argument. But one leads to the other.

China is a very good case study of how a country has rapidly developed into a major defence exporter. China has entered this in a very, very big way. They are exporting to the entire world, not least to our neighbours. The history of cooperation with Pakistan, Myanmar, Bangladesh, Sri Lanka are all facts of life. They should therefore have no difficulty at all if some country close to them or in the neighborhood, or anywhere else for that matter wishes to take completely independent decisions to acquire an Indian military platform.

We should have no hesitation in responding to such requests, and they should have no difficulties because they’ve done this. They have done more. They have shown us how they can reverse engineer technologies. We are not in that game. Everything we have done is done indigenously.

It would be a worry, I mean, this is a worry for every exporter every sophisticated high technology military item, it applies even to cases where we import from established defense supplier so this is a worry and you know when you when you switch from being an importer of defense equipment, to being an exporter of defense equipment or defense technology, you have to take these things into account. There are many technology regimes, many controls that have been placed nationally and multilaterally. They are geared to ensure that technology does not fall into the wrong hands. That it does not fall into the hands of adversaries.

The joint venture was established in 1999, 23 years ago. It was a very visionary step taken. At that time, the defence sector in India, the manufacturing sector, was largely closed. At best you would have had licensed production of some equipment like tanks or some of the aircraft etc. But this involved sharing of technology. There were a lot of doubters about the success of this joint venture. But time has shown that the decision taken to go into this collaboration with the Russian NPOM was in hindsight a good decision, because you have this world class platform, the cruise missile.

The Indian experience of dealing with the NPOM, the Russians has been quite good in terms of technology sharing, in terms of upgradation and we actually have reached a stage where the Russians have shown a lot of interest in acquiring and utilising this product into their own systems. This has paved the ground for becoming more ambitious. We have set up a joint venture to manufacture the Kalashnikov. You can imagine a situation where in a few years time, we could have similar experiences of exporting to third countries, this joint India-Russia, technology.

This is something which has always been of great interest to us, because we have many friendly partners and new countries with whom we have relations of trust. We have said, look, why don’t we work together, whether it is the United States, France, Germany, Israel, Russia, of course, that why don’t we use the Indian manufacturing base, the size of the Indian market, and the human resources etc to leverage our mutual complementarities to export to third countries.

This is happening and it has begun to happen. Now when you do this, you have an obligation because you have a joint venture and you have to consult each other. Because there are political, technology and military sensitivities. So you have a process of consultation to decide on each export. This is fairly standard procedure in this business. It’s nothing specific to the BrahMos.

Already with the United States, etc, there are projects that are underway or proposed where you would be exporting to third countries. It may not be finished products. It could be some sub-assemblies and other things. If you look ahead, given the kind of developments that are taking place in our own defence sector and the series of reforms that have been introduced, for example, even simple things like allowing FDI up to 74% and 100% in the case of the government route, the reforms in the Ordnance Factory boards, the entry of the private sector, a host of other reforms.

There are many unfolding initiatives which are underway, for example, the development of aircraft engines, drone technology, naval vessels. We are in the process of launching an aircraft carrier. There are different product lines, different platforms, where we are looking ahead very, very seriously. Even aircraft, for example, the Light Combat Aircraft.

These have enormous potential and the nature of the business is such that you have to have integration with foreign partners, foreign collaborators. To expect 100% indigenous products is neither practical nor perhaps is it technologically deserved, because apart from economies of scale, you also need to harness the competitive technologies of partners and if they are willing to join with you. It would be profitable for both parties.

Even if you look at say the target of exports-$5 billion by 2025. Assuming that the Brahmos deal is $375 million. If you divide 5 billion by 375 million, all you need is another 13, if my math is correct, similar deals and you’d have achieved your target of 5 billion with one system alone. It’s great that the leadership is setting high standards. Ambition levels are much higher today. But that also is a product of your own self-confidence.

It is definitely palpable and the armed forces are on board. The other reality of life is that if you want a strong military and a strong army, you have to be self-reliant in terms of the kind of equipment, technologies, doctrines they use. And this label that we have of the world’s second-largest importer is not exactly a great compliment for our capabilities.