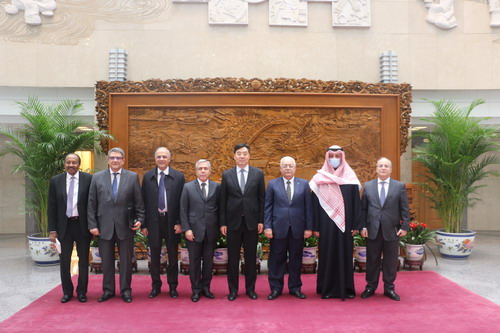 China’s presence in the Middle East and the Persian Gulf isn’t confined to just the commercial realm. In fact, Beijing is rapidly expanding its diplomatic and security engagement in those regions because it has hegemonic ambitions that will challenge incumbent powers like the United States. China is steadily reducing its dependence on African oil suppliers, who once accounted for a third of Chinese crude imports.

China pledged $23 billion in loans and aid to Middle East countries in 2018 and signed another $28 billion in investment for infrastructure and construction projects. As Chinese influence and business spread across the region, the US officials, suspicious of Chinese geostrategic intentions, are becoming increasingly wary.

The bulk of Chinese investment in the region is tied to the Belt and Road Initiative (BRI), a scheme launched in 2015 to spur trade along land and sea routes linking Asia, Africa and the Mediterranean. Analysts say the enormous investments in the project can easily be leveraged for political and geostrategic influence and countries taking loans are likely to be caught in debt traps. There are obvious reasons for Washington’s growing unease. China has signed the Belt and Road cooperation agreements with 17 Arab countries.

Meanwhile, Huawei and other Chinese firms continue to make rapid inroads among Gulf countries despite the United States’ efforts. The Chinese telecom supplier and mobile phone manufacturer Huawei made headlines throughout 2020, most recently in Southeast Asia, with a blitz of deals monopolizing Indonesia’s 5G network. Eleven telecom firms, including those in the Gulf Cooperation countries (GCC) of the UAE, Saudi Arabia, Bahrain, Kuwait, and Oman have signed massive 5G contracts with Huawei over the last one year. By 2025, GCC countries will house much of the world’s growing 5G subscribers.

Huawei has been relentlessly extending its digital footprint across the Middle East despite Western efforts to curtail its global expansion. The United States has repeatedly expressed security concerns over Huawei’s presence in international markets. While the US government’s efforts to halt Huawei’s expansion have succeeded domestically and in parts of Europe, the Gulf market has remained open. This is perhaps due to the region’s highly sensitive position in geopolitics. Given a heavy reliance on China’s oil import, while also retaining a significant US military and diplomatic presence, there is no incentive for Gulf economies to become a proxy-war zone for the world’s two largest superpowers. Further, COVID-19 has made Gulf economies increasingly reliant on China as the nation’s economy recovers faster than the United States’ from the global recession.

As pointed out by many analysts, China is not shy about using trade and investment as a tool for statecraft and has in the past readily used commerce to extend its sphere of influence. US policymakers fear that under the guise of the BRI, Beijing is also aiming to upset America’s traditional alliances.

The relationships, though, are unlikely to be frictionless, analysts believe. Chinese and Arab interests could be at odds, too. China is also a competitor in some areas where Arab Gulf states are investing in infrastructure, ports and political outreach to secure new security partnerships; particularly in the Horn of Africa. Meanwhile, while African and even European states have been ready to accept large Chinese loans for infrastructure projects, rising fears of being caught in debt traps, which can then be used for political leverage by Beijing, has become an issue of concern for some of them. Arab states, even cash-strapped ones, have been far more cautious about accepting loans. Algeria, two years ago, announced it wouldn’t enter major deals by borrowings from the Chinese.

However, it may be interesting to note that the state of Oman seems to suggest a different pattern. Oman remains precariously over-exposed to dependence on the Chinese for its economic needs. The vulnerability of this debt-ridden country has only amplified over the years. Despite measures at diversification from an oil-based economy, Oman has managed only modest progress. With a promised 10.2 billion USD investment in its ambitious Duqm project, Oman sees a friend in China for its diversification plans. Oman has embraced the BRI under this grandiose promise, but on ground, realisation is far from that envisaged.

For Oman, more than 80 per cent of its oil is also exported to China, making China its essential source of revenue. Oman’s borrowings from Chinese banks exceed $3.55 billion, the highest amongst GCC states. A substantial part of this would be due for payment in the coming years. In December 2019, the Oman Electricity Transmission Company sold off 49 per cent of its stake to the China National Electricity Grid Corporation for $ 1 billion.

Huawei, the ICT giant, is also making rapid inroads into Oman’s 5G setup. As it stands, China is slowly but steadily spreading its tentacles in Oman. With large stakes in the power sector, dominant presence in ICT and associated infrastructure, fiscal influence due to loans, and promises for future investments, the Dragon is inching towards a greater grip on Oman. Its recent gift of COVID-19 vaccines to Oman, which came with a rider of prioritising Chinese citizens over others, highlights the glitch in its generosity.

Limited oil reserves, fluctuating oil prices and demand, slowdown due to COVID- 19, increasing pressure on the social schemes and job creation programs in the country, and rising budget deficit makes Oman most vulnerable to economic opportunism by China.

Oman, this year has already received some financial assistance from its neighbours but remains on the lookout for more. As its fiscal fate hangs in balance, who would bail out Oman, remains to be seen. Chinese hawks could very well jump at the opportunity of bagging yet another strategically located and economically vulnerable prey in its treacherous trap. As the dragon makes inroads in the Middle East, there is more and more that it will attempt to swallow.