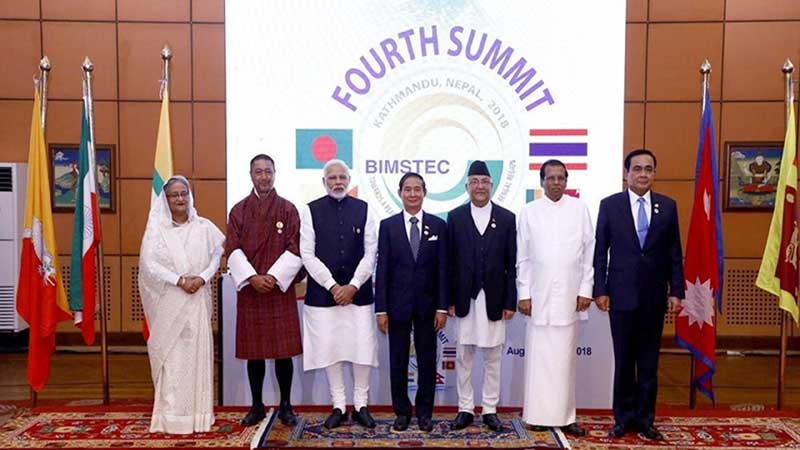 Kathmandu, August 31: The Indian delegation led by Prime Minister Narendra Modi Modi which participated in the deliberations of the fourth Bimstec Summit should be returning to New Delhi a satisfied lot. For, India has managed to get in mention of the cross-border terrorism perpetrated against it by neighbour Pakistan in the Kathmandu Declaration issued following the two-day Summit’s conclusion today.

The Declaration, endorsed by leaders of the seven Bimstec member states called upon “all countries to devise a comprehensive approach in this regard which should include preventing financing of terrorists and terrorist actions from territories under their control, block recruitment and cross border movement of terrorists”.

Devoting several paragraphs to terrorism wherein an accusing finger was clearly pointed at Pakistan, the Kathmandu Declaration noted that “the fight against terrorism should target not only terrorists, terror organisations and networks but also identify and hold accountable States and non-State entities that encourage, support or finance terrorism, provide sanctuaries to terrorists and terror groups and and falsely extol their virtues”.

An important decision taken at the Summit is to rationalise Bimstec’s priority areas that comprise a long list of 14 items at present. Many member countries had been seeking this rationalisation. The Declaration therefore took note of the need to “review, restructure and rationalise the existing areas of Bimstec cooperation”.

A substantive Summit outcome was the inking of an MoU on Bimstec Grid Interconnection which will eventually culminate in the setting up of a Bimstec Grid to enable energy trade among member countries and thus aid the Bimstec’s region’s economic development.

The Declaration while affirming the resolve of member states to re-double efforts to enhance energy cooperation, said an inter-governmental group will be set up to examine ways of doing so.

With Bimstec members keen on intra-regional connectivity, the Declaration reiterated their resolve “to establish seamless, multi-modal transportation linkages and smooth, synchronised transit facilities” be it by road, rail, waterways and sea.

It also called upon members to “speed up their efforts to conclude the Bimstec Coastal Shipping Agreement and Bimstec Motor Vehicle Agreement as early as possible”. Both have been under discussion for long.

On the connectivity front, the Declaration while expression satisfaction at the preparation of a Bimstec Master Plan on Transport Connectivity, called for its early adoption by member states.

With several rounds of negotiations on the proposed Bimstec FTA having failed to yield a consensus, the Kathmandu Declaration has now called upon the Trade Negotiating Committee to expedite the finalisation of all related agreements for the Bimstec FTA as soon as possible.

A Framework Agreement for BIMSTEC Free Trade Area was inked in 2004 but in the 14 years since, the grouping members have not been able to sign the final pact.

Other issues of common concern flagged in the Kathmandu Declaration include implementation of Agenda 2030 for Sustainable Development and speeding up the Bimstec Poverty Plan of Action.