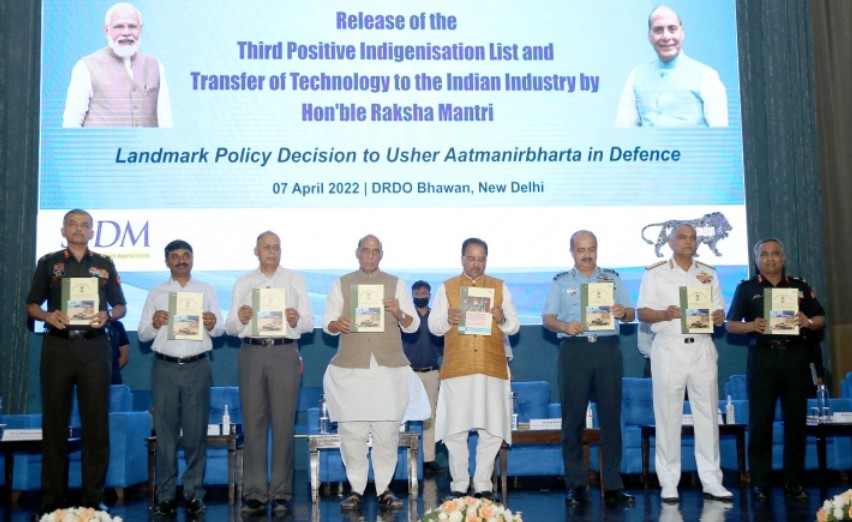 The government on Thursday gave a further boost to Amanirbharta in Defence by releasing another list of 101 items for gradual indigenisation. The List was virtually released by Defence Minister Rajnath Singh and consists of complex military equipment systems and that will be put under import restrictions across a staggered timeline of over three-and-a-half years. This list of 101 more weapons and platforms  is the third positive indigenization list which is in continuation of the first list of 101 items and the second list of 108 items. They were released earlier on 21 August 2020 and 31 May 2021 respectively.

The positive indigenisation lists have been hosted on the website of the Defence Ministry to provide wider visibility to the defence industrial conglomerate. It will enable them to effectively meet the requirements of the defence forces. The focus has also been given to the indigenisation of ammunition, which is a recurring requirement entailing regular outflow of foreign exchange. 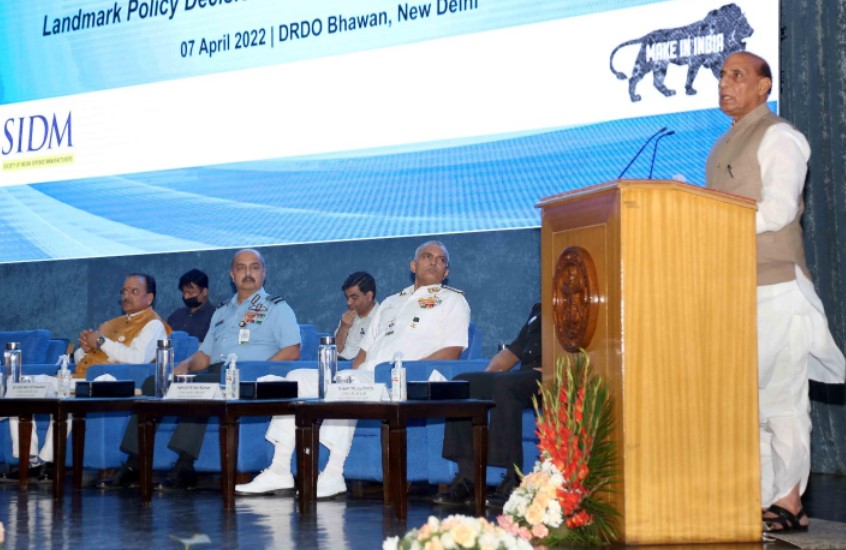 Defence Minister Rajnath Singh said “the third list as a symbol of 360-degree efforts being made by the government to achieve Prime Minister Shri Narendra Modi’s vision of ‘Aatmanirbhar Bharat’, while addressing the formal release function. He exuded confidence that this new list will prove to be crucial in the development of the domestic industry and take the research and development and manufacturing capacity of the country to a higher level.

It is expected that orders worth more than Rs. 2,10,000 crores are likely to be placed on the industry in the next five years for the items that are covered in the 3rd Positive Indigenisation List. Over 300 sophisticated items are covered in the lists ranging from complex weapon systems to critical platforms such as combat aircraft, armoured vehicles, submarines, etc.

The 3rd Positive Indigenisation List comes at a strategically important time. Given the current geopolitical scenario, the importance of being self-reliant in defence production is more apparent than ever and the industry is well poised to manufacture the listed items indigenously and enhance the operational readiness of our forces. Indian defence industry welcomed the government’s move to reform the domestic defence sector.

“The Indian Defence Industry has been galvanised by the path-breaking policy reforms introduced by the Ministry of Defence in recent years. The 3rd Positive Indigenisation List is another step in this direction and is warmly welcomed by the industry,” said Baba Kalyani, CMD, Bharat Forge.

Jayant Patil of L&T Defence observed, “3rd Positive Indigenisation List reaffirms GoI’s unwavering trust in the capability of the Indian Defence Industry. The three lists provide a shot in the arm to the domestic Defence Industry to realise the Aatmanirbhar Vision of our Prime Minister, build a strong India and attain strategic independence in foreign policy- a much-desired aim for all nations in the current global geopolitical situation”.

Representing the Indian defence industry, SP Shukla, President, SIDM welcomed the reform with enthusiasm and said “The 3rd Positive Indigenisation List comes at a strategically important time. Given the current geopolitical scenario, the importance of being self-reliant in defence production is more apparent than ever and the industry is well poised to manufacture the 101 items indigenously and enhance the operational readiness of our forces”.

In the last few years, the government has taken a series of measures to promote domestic defence production. India is one of the largest importers of arms globally. According to estimates, the Indian armed forces are projected to spend around 130 billion US dollars in capital procurement in the next five years. The government now wants to reduce dependence on imported military platforms and has decided to support domestic defence manufacturing. The defence ministry has set a goal of a turnover of $25 billion (Rs 1.75 lakh crore) in defence manufacturing in the next five years that includes an export target of $5 billion (Rs 35,000 crore) worth of military hardware.