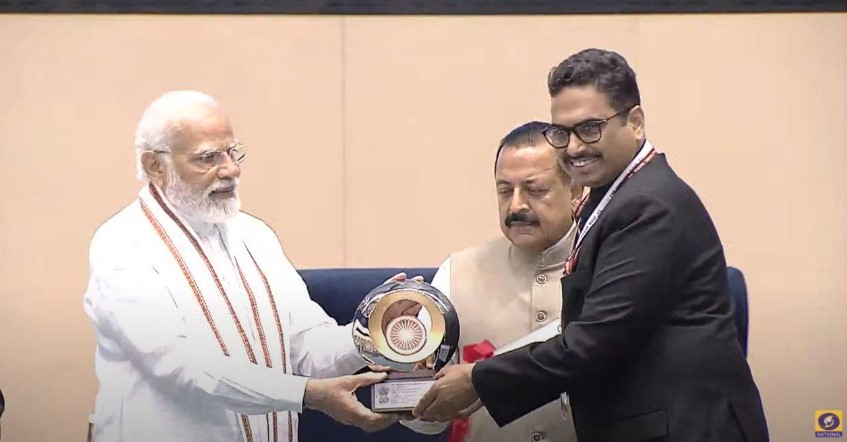 Department of Defence Production (DDP), Ministry of Defence has been conferred with Prime Minister’s Award for Excellence in Public Administration, 2021 for its initiative iDEX in the category “Innovation-Central”. DDP’s Additional Secretary and CEO of Defence Infrastructure Organisation (DIO), Sanjay Jaju on Thursday received the award on the occasion of Civil Services Day. Congratulating Team iDEX, Defence Secretary Dr Ajay Kumar described the award as one that rewards the stupendous work and is a great recognition of DIO’s endeavours.

Indeed, the journey of the Innovations for Defence Excellence, Defence Innovation Organisation (iDEX-DIO) has been proving to be a game-changer in the defence eco-system. It was launched in 2018 to foster innovation and incorporate cutting-edge and disruptive technologies for the Armed Forces in a quick time frame. The iDEX scheme has now gathered momentum and it’s expected that around 25-40 items after the successful prototyping by the iDEX start-ups and MSMEs, will be ready for procurement by this year-end, according to the sources in the Ministry of Defence (MoD).

The policy decisions of this year’s budget are also a follow up of the government’s initiative to bring start-ups to work closely in the Defence sector under iDEX. In a continued effort to reduce imports and promote self-reliance in equipment for the Armed Forces, 25 per cent of allocation for defence R&D has been kept for collaboration with the private sector. The Budget announced the highest ever allocation for the defence sector, a whopping increase of almost 10 per cent to Rs 5.25 lakh crores. Among other announcements, this year’s budget also saw 68 per cent of the capital procurement budget earmarked for domestic industry.

Innovation has become the key driver of the pace of societal evolution and it redefines social parameters with unique outputs. iDEX has always been at the forefront of innovation in defence and internal security and most of its projects also have tremendous civilian applications in the fields of Quantum Computation, Artificial Intelligence, Predictive Maintenance, Logistics, Data Analytics, Security and Encryption, Communication and others.

It has enabled the military to find disruptive solutions to complex challenges through its flagship programmes like Defence India Start-up Challenges (DISC) and Open Challenges (OC) which is the key components for the future of military technology. So far, iDEX has launched five rounds of DISC and three rounds of OC, receiving more than 2,000 applications from individual innovators and start-ups. Furthermore, iDEX has been able to fund projects in numerous technological areas through its Grant-in-Aid framework, Support for Prototype and Research Kickstart (SPARK), which entail provisioning of grant up to Rs 1.50 crore to budding entrepreneurs.

The iDEX is now entering the next phase in productionisation and commercialisation. This will lead to the broad-basing of the defence industrial base. An enterprising network of experts from the Defence Services, DPSUs, Industry, Academia, iDEX officials and the startups/MSMEs are involved in the process of co-creation and co-innovation. The aim is to provide at least 50 world-class solutions to the Armed Forces and the defence industry soon, the MoD sources revealed.

To take this further, iDEX will be launching the sixth edition of DISC with numerous diverse problem statements from various stakeholders. Defence Minister Rajnath Singh on 22 April will inaugurate DefConnect 2.0, a one-day event to bring together start-ups, big companies and armed forces personnel to boost indigenous innovation in the defence sector in New Delhi, the MoD said on Thursday. The event will attract a large number of innovators and investors from India’s leading industries in the defence sector, the MoD said.

Evolution of Innovative Idea of iDEX

Before the launch of iDEX, there existed a gap in the interaction between defence and start-up ecosystem which posed a limitation in onboarding innovative indigenised products. one of the major drawbacks was the lack of a platform through which Armed Forces could present their technical challenges as problem statements. The iDEX platform enabled a robust system like access for innovators to the problem statements of armed forces, easy application method, quick results, easy and cheap access to defence equipment and test facilities to realise the Production Ready Prototypes.

Over 70 development contracts have been signed and orders placed for bulk procurement in two cases and a budget over Rs. 200 crore approved besides Rs. 80 crore grants sanctioned, as per iDEX data. Total Product Development iDEX Winners to date are more than 130 start-ups and MSMEs. Tendering process post-development was approved in 14 cases as the number of partner incubators at IITs, IIMs and other private incubators spread all over the country are the same.

To conclude, in a bid to push Make-in-India in defence, the Ministry of Defence has been sourcing equipment for defence requirements from the domestic defence sector and not relying on foreign vendors only. More importantly, India spends more than Rs 2 lakh crore on different acquisitions for its defence requirements, and earlier, the majority of armed requirements were used to fulfil through imports but the situation has changed in the last few years thanks to major policy initiatives taken by the government, particularly in the field of R&D and giving a platform to start-ups and MSMEs.