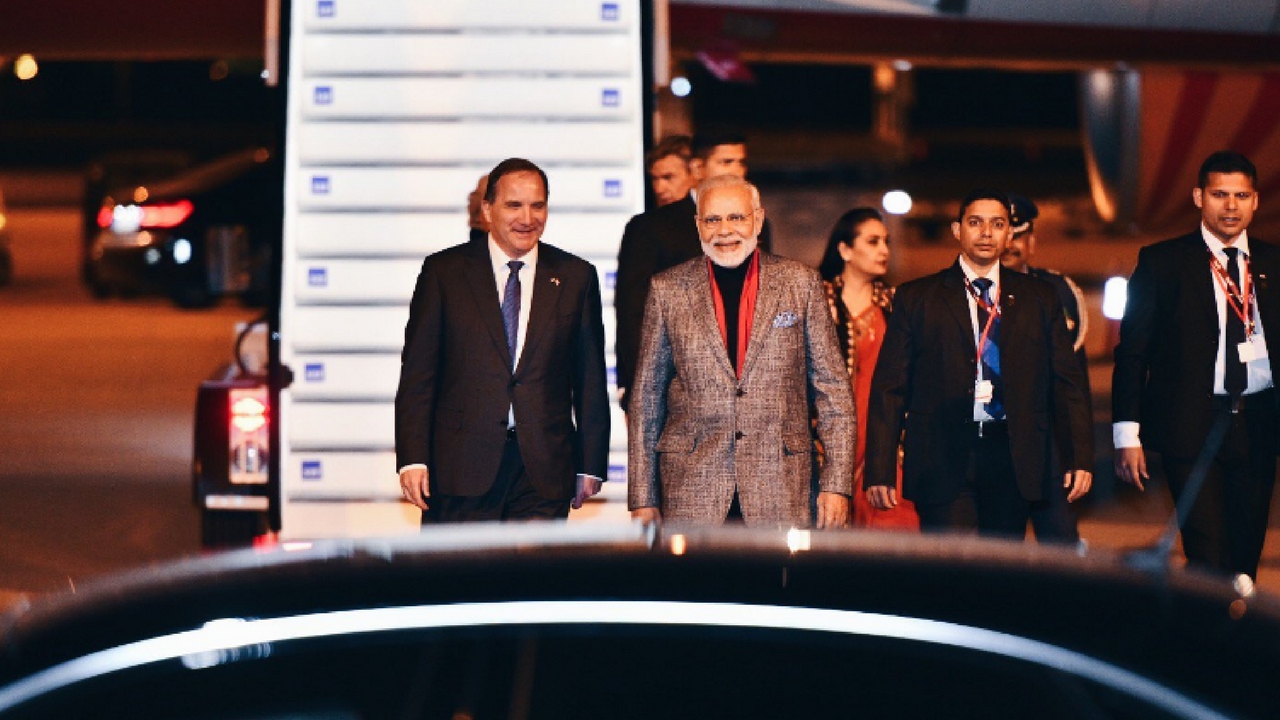 India and the Nordics – An Innovative Partnership

Prime Minister Narendra Modi attended the Indo – Nordic Summit in April 2018 rejuvenating relationships that hold out the promise of extensive co-operation between India and these countries. The author gives the details of India’s relations with these countries and the various areas that the participants decided to pursue. There are huge areas of mutual benefits that the visit throws open for pursuance.

India and the Nordics- An Innovative Partnership 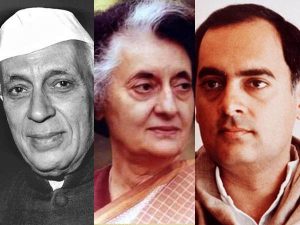 During the quest for disarmament, the then PMs Olof Palme and Rajiv Gandhi had worked closely, but the Bofors scandal and India’s nuclear tests placed the relationship on a backburner. While rest of Europe and US went ahead exploring India’s immense unleashed potential, post the economic reforms, Swedish leadership remained on the periphery. Realising the futility of a policy of ignoring India the Swedish Prime Minister Goran Persson decided to revamp the approach with intense engagement to catch up on lost opportunity. His visit in 2004 and meeting with PM Vajpayee opened new vistas of cooperation. Since then, several high level visits and exchanges have taken place, the last being that of President Pranab Mukherjee in 2015.

The two countries enjoy cordial relationship and excellent cooperation in regional and international fora. Sweden supports India’s membership of the expanded United Nations Security Council (UNSC). Sweden supported India in its membership of the Missile Technology Control Regime (MTCR) and has extended full support in India’s bid for its pending membership of the Nuclear Suppliers Group (NSG). The two countries have been supporting each other on reciprocity for their non-permanent memberships in the UNSC and various positions in different organs of the UN and other multilateral fora. Mutual economic interests have emerged as the driving force in the relationship. This was been reiterated in the Joint Action Plan adopted during the visit.

Swedish companies like Swedish Match had come to India in the early 20th century. Major Swedish MNCs like Ericsson, Atlas Copco, ABB, Electrolux, Tetra pack, Volvo and H&M have become household names. Ikea is the latest entrant although for decades they have been sourcing billions of dollars of products from India for their global stores. 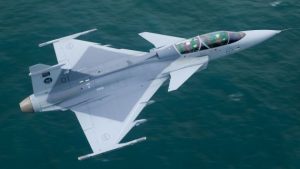 Defence is an important area for closer engagement as despite the Bofors scandal no one could deny the efficacy of the gun during the Kargil War.Swedish companies are keen to enter the market in a significant way. They are hoping to sell Gripen- their single-engine ace fighter aircraft.

Both sides agreed to have greater exchanges and defence products related seminars in India and Sweden during 2018-19. They will also explore opportunities for Swedish investments in defence corridors in India and create supply chain collaboration between SMEs and Swedish OEMs. The two sides also agreed to finalise an agreement on protection of classified information for cooperation in defence area.

PM Lofven last visited India in February 2016 along with a large business delegation for participating in the “Make in India” event in Mumbai and “Vibrant Gujarat” in Ahmedabad.

Large number of ministerial delegations have visited from both sides in the intervening period. I was fortunate to be involved in the institution of the Sweden-India Business Council in 2002. It has become the coordinating agency for the India -Sweden Business Leaders Round Table (ISBLRT) created in February 2016 with CII’s participation. Meetings were held in New Delhi on 9 November 2016 and again in Stockholm on 11 October 2017. Prime Minister Modi addressed the CEOs of top Swedish companies who attended in strength.

India’s exceptional investment potential and Swedish cutting edge technologies and capital could be leveraged for the benefit of both sides. Greater efforts have to be made to even reach the already agreed $5bn trade target(by 2018) since it is way behind schedule and expectations. 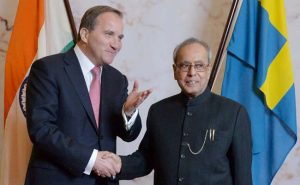 During the visit of President Mukherjee in 2015, six intergovernmental Agreements/MOUs were signed, which dealt with important areas of cooperation i.e., Sustainable Urban Development; Micro, Small and Medium Enterprises; Visa Exemption for Diplomatic Passports; Polar and Ocean Research; Ageing and Health; and Pharmaceutical products.

Since Sweden can boast of some of the finest educational and research institutions and is one of the ace spenders on R&D globally, 15 agreements were also signed between the educational institutions of the two countries.  The Intergovernmental Joint Commission on Economic, industrial and scientific cooperation as well as the Joint Working Group on Defence Cooperation and Foreign office Dialogue are the key mechanisms to orient and take stock of the cooperation. But usually, such mechanisms peter out, leading to merely recommendatory statements which are again assessed during the next meeting.

It’s important to have a Joint Plan of Action with time-bound deadlines. In addition, during the visit, both sides signed a closer cooperation agreement on Innovation Partnerships in diverse areas as these are a priority for India. Be it Make in India, smart cities, skill development – especially for women empowerment, digital India, renewable energy, smart urban transportation, start-ups and waste management, green-tech and mobility; expertise of Sweden and other Nordic countries, acknowledged leaders in such areas, would be of great help. Cybersecurity, space research and cooperation in counterterrorism, defence and security cooperation were other key areas of enhancing closer partnership.

While welcoming PM Modi in an editorial in Times of India (April 14, 2018), PM Lofven admitted that the rise of 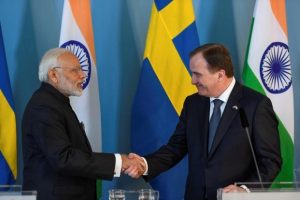 modern India had affected Sweden in multiple and profound ways. He further underscored, “I am convinced that India and Sweden can build a unique partnership. A partnership where we innovate together on everything from smart cities to e-Mobility and smart grids, from digitalisation to smart manufacturing”.

Lofven further stated, “No important global conversation – whether on climate change or cyber security – is complete without the voice of India.”

On his part, PM Modi hailed the partnership between India and Sweden which is a win-win partnership that focuses on innovation and joint action. “We are working together in the fields of renewable energy, urban transport, and waste management. When it comes to trade and investment, we will speak to CEOs and take a decision.”

Prime Minister Modi had also addressed the Indian community from Sweden and other Nordic countries.

Our relations with other countries like Denmark, Finland and Iceland and Norway have been expanding but do need a boost. India’s trade with the Nordic countries is around USD 5.3 billion in 2016-17 and Cumulative Foreign Direct Investment (FDI) to India at USD 2.5 billion. Norway has the largest future/pension funds to the tune of US$ 1 trillion managed by Government Pension Fund Global (GPFG) some of which could be gainfully deployed in Indian markets, industry and technological ventures that could provide them excellent returns given the resurgence and growth of Indian economy and opportunity.

On the other hand, India being the fastest growing major economy holds immense attraction and potential for the Nordic region. These complementarities and the unique strengths of India and the Nordic countries hold the potential to further boost trade and investment from both sides.

Hopefully, the Indo-Nordic Summit mechanism and subsequent roadmap will ensure and devise a mechanism to address the core issues. We could also work with them in third countries and continents like Africa, and perhaps in the ambit of the Asia Africa Growth Corridor.

I recall that in the 1980s when we became member of the African Development Bank in Abidjan we were part of the Nordic constituency and it worked very well for us. It’s time to expand its frontiers further. India – Nordic countries relationship could emerge as a truly 21st century partnership given the technological edge, institutional and industrial depth in the Nordic countries.