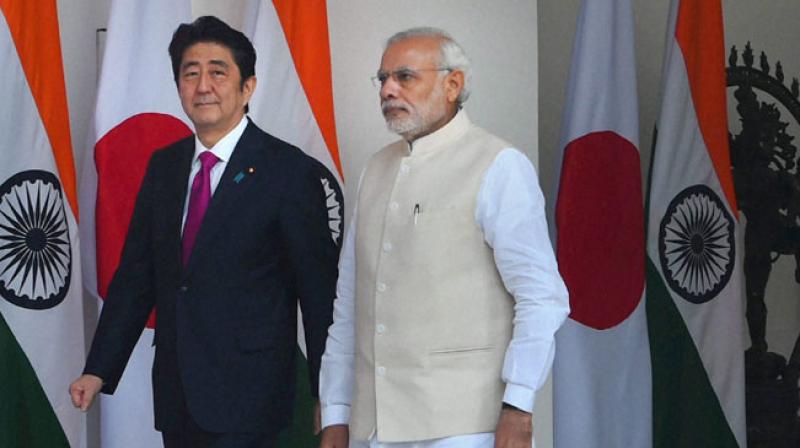 The Chinese have made firm inroads in Africa. However, the Africans have begun to realise that the Chinese are not really benign investors. Investment is often the route they adapt to create an unequal relationship. India has historical ties with African nations and the Indian diaspora in Africa has contributed both in development and job creation. An Indo-Japanese thrust in assisting African states out of their abundantly poverty-stricken conditions can create a win-win situation. The author examines the mechanisms that the two countries have put in place in Africa and advises that we approach African development through African lenses.

India and Japan, the two powerful economic giants in the region have achieved an exceptional sophistication for mutually beneficial cooperation in last decade or so and more importantly in the past couple of years as their strategic space is constrained by a rising China. It is not only limited to the bilateral context but is aimed at expanding a benevolent footprint in South East Asia as well as Africa. India has been engaged with Africa for centuries in one way or the other while Japan has been a liberal spender by way of a tremendous Official Development Assistance (ODA) and investments. Hence, it is natural that both have decided to work closely in Africa. It was only last week that the “India-Japan Act East Forum” met in New Delhi to fine tune and chart out the nuts and bolts of the collaborative strategy and paradigm.

This is a unique initiative of synergies that could trigger a multiplier effect since the three countries/regional components present a fine balance of requirements and availability be it finance, expertise in capacity building, technology or investment, best practices or political will to execute. These, in totality, could comprise a real strategic partnership for global good. The three constituents in this matrix are at varying levels of development. Japan is the third largest economy, leader in technology and ODA and above all looked at as a benevolent democratic economic powerhouse.

India, a country of continental proportions, is on an ascendant curve and is at the least a regional leader in this Asian century. More importantly, India – the fastest growing major economy – in the decades to come could become 2nd or 3rd largest economy apart from being the largest functional democracy in the world. India is an acknowledged global leader in the sunrise sectors like the pharmaceuticals and Information technology, several offshoots of which will guide and assist our lives in the times ahead. Besides, India also has witnessed a peculiar existence of growth curves from underdeveloped parts in the country to highly developed regions within the same national matrix.

India has led the developing world especially Asia and Africa by support for their independence struggles and in their quest for development be it through NAM, G-77, WTO or Climate Change or unconditional bilateral assistance. The Indian endeavours continue in the context of international negotiations and discourse Hence, India is considered by most others as a preferable benign power.

Africa, the vast continent comprising of 54 countries and huge natural resources, has been beset with problems of underdevelopment despite being a rich landscape of opportunities, due to internal governance issues, colonisation, neo-colonialism, malnutrition and diseases. Most of Africa has been bypassed by various industrial and economic revolutions. South Africa and a couple of other countries are exceptions and have a varied and chequered history.  However given the right impetus and focussed approach and direction, Africa could lead the 22nd Century. Therefore this trilateral collaborative effort through a credible and trustworthy institutional mechanism could be that trigger for a mutually beneficial developmental paradigm shift.

China has emerged as a major benefactor of the region in accordance with its medium and long-term global strategy. However, while utilising the available economic space it indulges in predatory neo-colonialist approaches that have raised questions about its motives and modus-operandi. China, through its money power and financial muscle and quick and firm decision making, has been able to exert influence. It has been successful in etching a lasting footprint.  They are also changing tactics as they fear the Indo-Japanese as well as western focussed attention on the continent. 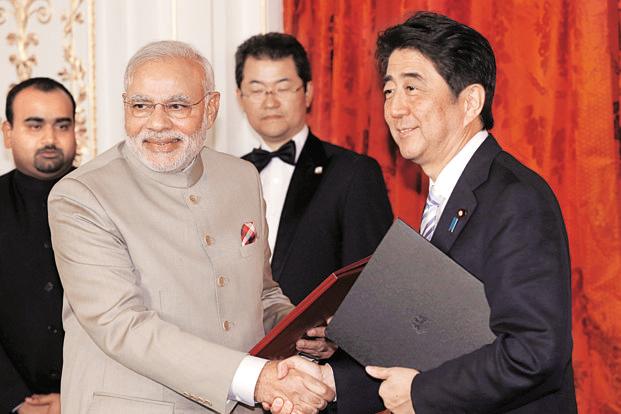 In November 2016, Japan’s Prime Minister Shinzo Abe and Indian Prime Minister Narendra Modi in their Summit Joint Statement reiterated the resolve of the two countries to “Develop industrial corridors and industrial networks for the growth of Asia and Africa.”  India-Japan economic engagement with Africa, under the aegis of Asia Africa Growth Corridor (AAGC), is based on the premise that the direction of global economic activities is indeed shifting towards the Indo-Pacific Region. India and Japan as two democracies and robust economies are committed to evolve a sound economic, political and security architecture for the Indo-Pacific Region and collaboration with Africa and ASEAN are a natural corollary.  The vision document clearly highlights that the AAGC would be based on four pillars: “enhancing capacity and skills; quality infrastructure and institutional connectivity; development and cooperation projects; and people-to-people partnership.”

In India, we can take pride in the fact that due to historical relations and engagement at people to people levels, Indians and India enjoys a huge public trust and affection in Africa. Indian diaspora has been extremely successful in building bridges of trust and reliability over the centuries and have emerged as major stakeholders in the African developmental story.

I recall President Obasanjo of Nigeria often mentioning to me that he knew India better than I did and that “After the Federal Government, Indians were the second largest employers in the country”. The fact that large number of African leaders and ordinary Africans were trained or educated in India created this positive critical mass that provides an exceptional edge to us. But, over the years that goodwill has been squandered away due to apathy and ad hoc approaches of respective governments.

There has been a hiatus ridden approach with high-level visits from India few and far in between. Not to say that some major initiatives like Pan-Africa e-network project, a brainchild of former President Kalam, has mapped a successful cooperation paradigm across the continent for tele-education, tele-medicine and connectivity.

Though late in the day, India did embark on extensive engagement with Africa through bilateral meetings and multilateral events like India-Africa Forum Summits and high-level visits. Since India follows a policy of “Cooperation without Conditions” broadly Africa does look up to India and considers it a benign yet wiling democracy that is ready to share its economic achievements and expertise with the continent.

At the India-Africa Forum Summit 2015, PM Modi announced a $10 billion line of credit apart from a $100 million fund which entailed a new approach to engagement with the African continent. This will not only help finance the projects in African countries but will further contribute to capacity-building and education and industrial development. India has been awarding thousands of scholarships to African nations under the ITEC and ICCR programme. India is the fifth-biggest investor in Africa, with investments over the past 20 years amounting to $54 billion, creating jobs for many Africans. By 2034, countries of Africa will have a larger workforce than India or China. 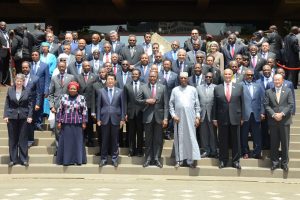 On the other hand, Japan has been an active cooperation partner in Africa with its huge assistance under the ambit of its resource and economic diplomacy that seeks to enhance export of infrastructure to meet over $100 bn financing deficit for infrastructure projects. It has already invested $30bn under this initiative and is planning to invest US$200 bn in the proposed growth corridor. According to Japanese Business Federation (Keidanren), Africa is a regional priority and an emerging market for tripling their infrastructure sales.

As indicated by KPMG in a report for AfDB, “Africa provides an opportunity worth $2.4 trillion. As many as 400 projects worth $70 billion have been discussed. So far investment of about $2.5 billion is already in the pipeline of which $1.5 billion is for the agriculture sector”.

Japan’s Africa outreach is undertaken primarily through the Tokyo International Conference on African Development (TICAD). According to various reports, Tokyo is concentrating on three important areas, in keeping with the focus of Japanese private sectors. These areas are the Northern corridor, Nacala corridor, and the growth area in West Africa. The focus will be on natural resources and energy development; and urban development. Japanese investment will be effected partially by using the Enhanced Private Sector Assistance for Africa (EPSA), conceived in partnership with the AfDB. In addition, Japan under the Abe Initiative 2.0 aims to nurture “manufacturing and maintenance service personnel” and capacity building of technical personnel in the field of natural resource development 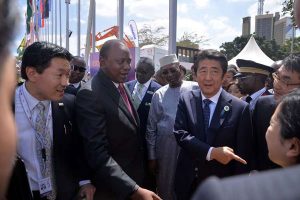 AAGC seeks to provide an alternative model of development and partnership between developed and developing countries /region for mutual benefit incorporating interconnectivity, infrastructure development and capacity building. The Indo-Japanese initiative hopefully has taken into account the shortfalls of the previous engagements. We cannot play around with the pride of the Africans and think that we know what is good for them.

It’s important to recall a recent viral video of the Ghanaian President giving some lessons to President Macron of France underscoring that the Africans have to rise to the occasion and help themselves rather than depend on external bounty, doles and advice.  We should take into account the sentiments of the average African and his political, economic and strategic thinking; mindset and diversity. A joint collaborative and open-ended approach will be greatly helpful.

Fortunately, AAGC in its conceptualisation sees Africa as a collaborator as well as an equal partner. This is evident from the fact that the Vision Document of the AAGC notes that the conceptualisation of the proposed growth corridor will be conducted by constituting “A joint study team with other think tanks and organisations in Asia and Africa.” In addition, the vision document also states that “contribution to the local society and economy” will be an important aspect that is going to define the operationalisation of the economic corridor.Surely, it will lead to a unique “Win-Win” Asia-Africa partnership.