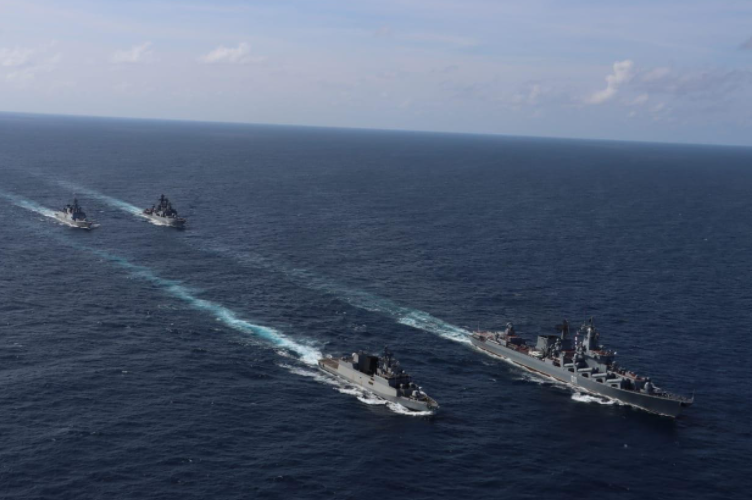 The Indian Navy will host its largest maritime war game Milan 2022 at Visakhapatnam from February 25 to March 4. This year’s edition is expected to witness its largest-ever participation with more than 45 countries, the Indian Navy said on Friday. Invitations to the navies of 46 countries have been extended to Milan 2022, and about 35 have confirmed participation, Navy sources disclosed. Around 15 countries are expected to send their ships and submarines for the exercise, while others will send a delegation. Among the many countries that will be sending ships or delegations are the Russian and the QUAD members – the United States, Japan, and Australia.

The theme of Milan’s 2022 edition would be ‘Camaraderie-Cohesion-Collaboration’, the Indian Navy said. The exercise aims to hone operational skills, imbibe best practices and procedures, and enable doctrinal learning in the maritime domain, through professional interaction between friendly navies, it noted.

Milan is a biennial multilateral event hosted by the Indian Navy since 1995, but it was initially limited to South Asian and Southeast Asian countries. In 2014, participation increased from six regional countries to eighteen.

“This addition of Milan envisages further enhancement of the scope and complexity with a focus on exercises at sea on surface, subsurface, and air domains, including weapon firings,” said an Indian Navy official.

Starting with the participation of only four countries – Indonesia, Singapore, Sri Lanka and Thailand, the exercise has transitioned in leaps and bounds since then in terms of the number of participants and complexity of exercises. Most invitations have been sent this year to the Middle East, including Saudi Arabia, Iraq, Iran, Oman, Qatar, Kuwait, and the UAE. Other countries invited include the United Kingdom, France, Israel, Kenya, Indonesia, Malaysia, and Mauritius, among others.

The exercise was supposed to take place in 2020 as it’s a biennial event but was called off due to COVID-19. In 2020, invitations were sent to 41 countries. It was decided that the exercise would take place in 2022 since it also coincides with the 75th anniversary of India’s independence.

The high-profile foreign delegates comprise Chief of Navy or equivalent from many countries that are expected to participate in the mega event, sources said.

President Ram Nath Kovind will review the Navy’s fleet, which is done by every President once in his term, later this month in Visakhapatnam. The Navy said that the review will take place on 21 February, and to commemorate the 75th year of independence, the theme of  PFR 22 is ‘Indian Navy – 75 years in Service of the Nation’.

According to the Navy, the fleet review is a long-standing tradition followed by navies all across the world and it is an assembly of ships at a pre-designated place for the purpose of displaying loyalty and allegiance to the sovereign and the state.

For the review, more than 60 ships from the Navy, Coast Guard, Shipping Corporation of India and the National Institute of Ocean Technology and submarines along with more than 50 aircrafts are expected to be part of the PFR this year.  The Navy said on Friday that this will be the 12th Presidential Fleet Review – the last one was conducted in 2016 under President Pranab Mukherjee.

A Fleet Review is usually conducted once during the tenure of the President. Since Independence 11 PFRs have been conducted by the Navy, of which two have been International Fleet Reviews in 2011 and 2016. In terms of significance, the Navy’s Presidential review is second only to the Republic Day Parade, a Navy official stated.