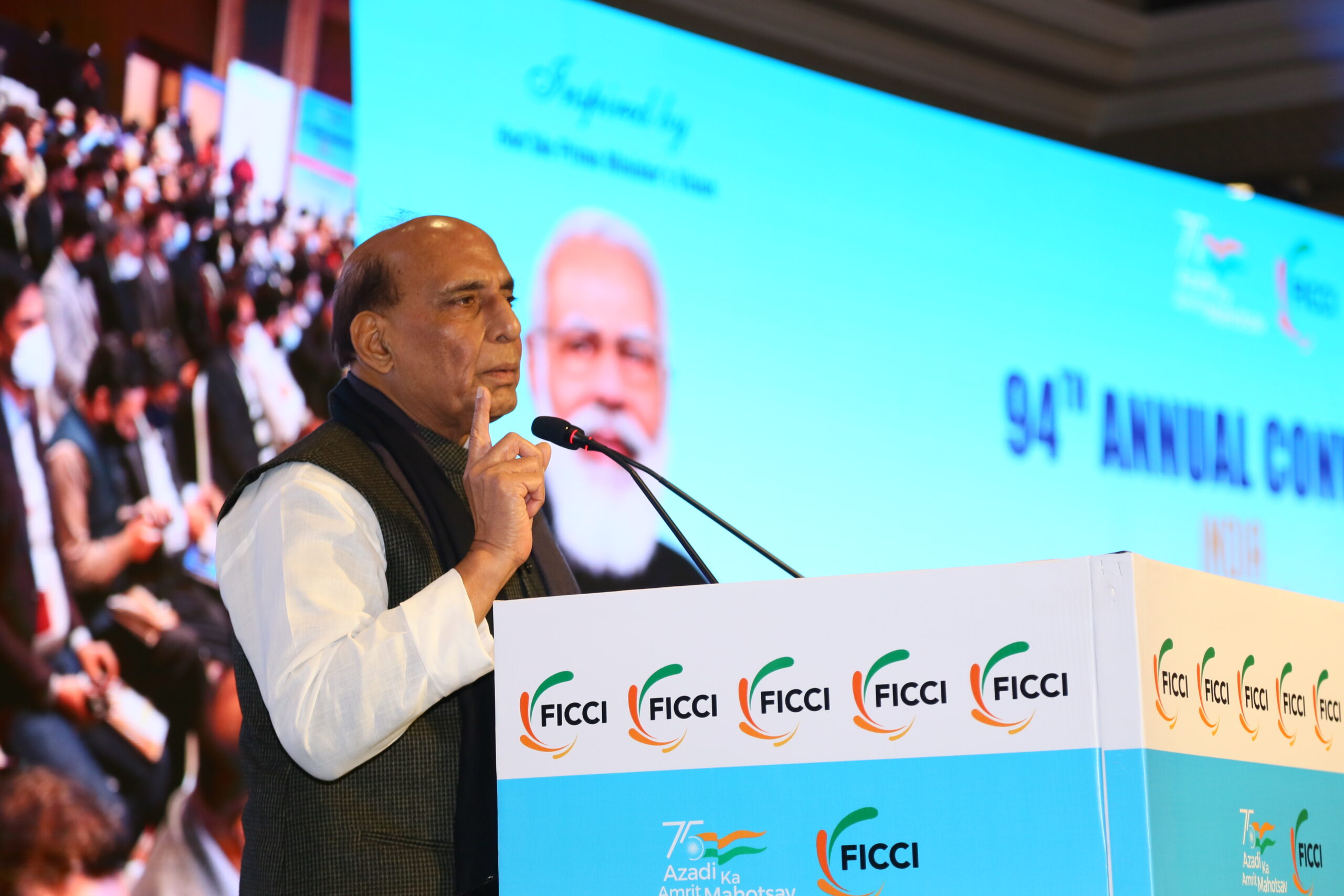 Spelling out the broad contours of the government’s vision of ‘India beyond 75’ Defence Minister Rajnath Singh emphasised the need to modernise the armed forces and create a strong and self-reliant defence industry that can help in safeguarding the country from current and future threats.

In an address at the annual convention of the Federation of Indian Chambers of Commerce and Industry (FICCI), he said the government’s vision is to make India a global defence manufacturing hub in the coming times, Underscoring the importance of achieving ‘Aatmanirbharta’ (self-reliance) in defence, Singh said, India cannot depend on other countries for defence technologies due to its stature, its geographical location as well as the security challenges it faces.

“For the security of India and its people, it is necessary that we develop our defence capacity and capability that even the most powerful country in the world has to think a thousand times before planning anything that endangers our interests. Our government’s aim is not to attack anyone, but prepare our Armed Forces to be ready at all times to give a befitting reply to the country’s enemies,” he said.

Defence Minister asserted that, on one side, there is one country born out of the partition and is worried about seeing the progress of India, while on the other, there is a nation that keeps on creating new plans. He highlighted the recent visits of Defence Ministers of the US, Russia and France, and said, “Countries across the world have friendly relations with us and we have told them that we wish to manufacture defence equipment in India as national security is our top priority”.

Focuss on ‘Make in India, Make for India and Make for the world’

He also mentioned the recent agreement with Russia, worth more than Rs 5,000 crore, to manufacture over six lakh AK-203 Rifles in Amethi, inviting every country to ‘Make in India, Make for India and Make for the world’.

Rajnath Singh listed out measures taken by the government to promote foreign investment, including increasing the FDI limit to 74 per cent through automatic route and 100 per cent through government route under certain circumstances. He said foreign investment will help to create an ecosystem of defence manufacturing in the country and achieve ‘Aatmanirbhar Bharat’, envisioned by Prime Minister Narendra Modi.

Positive List of Indigenisation to cross from 208 to 1000 items

He also spoke about the initiatives taken by the government to reduce dependency on imports, such as notifying two positive indigenisation lists of over 200 items. “The items in ‘Positive List’ will cross the 1,000-mark in this decade.

He said, the decision to corporatise Ordnance Factory Board (OFB) was taken in order to provide fair competition between public and private entities in the defence sector and bring efficiency in government companies. He appreciated the industry for working with the government to achieve self-reliance.

He made special mention of the order of 10 lakh Multi-Mode Hand Grenades given to Economic Explosives Limited following Transfer of Technology from Defence Research & Development Organisation (DRDO); the first batch of which has already been handed over to the Indian Army.

Voicing the government’s aim to tap the potential of MSMEs and ensure their progress, Rajnath Singh said, a series of steps have been taken to encourage indigenisation, development & design in the defence and aerospace sector.

“At present, India’s defence and aerospace manufacturing market is worth Rs 85,000 crore. I believe, in 2022, it will increase to Rs one lakh crore. When I talk about ‘India Beyond 75’, I see the defence and aerospace manufacturing market in India to be Rs five lakh crore by 2047. The present contribution of private companies is Rs 18,000 crore in the market of Rs 85,000 crore. According to the current situation, more than Rs one lakh crore will be the contribution of the private sector in the market of Rs five lakh crore in the future,” he said.

Gearing Up for Future Challenges

On the Innovation for Defence Excellence (iDEX) initiative, Rajnath Singh stated that while it is solving the technical problems of the Armed Forces, it has identified many technologies such as military security systems, secure hardware encryption devices, unmanned surface and underwater vehicles, 4G/LTE strategic local area networks, radar, artificial intelligence-based image analysis satellites. Stressing that the future wars will be fought in the digital war zone inter-connected through Artificial Intelligence, Augmented Reality & Virtual Reality, he urged the educational institutions to focus on specialised courses in defence technologies to meet the demand of professionals who can convert the future challenges into opportunities and bolster the security framework of the country. He called upon FICCI to play an important role in the collective efforts to take India to newer heights.

To realise its vision of making India a global manufacturing hub, Defence Minister said the government has taken several measures, including increasing the defence capital outlay by 18.75 per cent in the last budget. He added that 64 per cent of our total capital outlay, which is about Rs 70,221 crore, has been reserved for domestic procurement.

He appreciated the fact that the country’s defence exports have grown by 325 per cent in the last five years and exuded confidence that India will not only achieve its export target of Rs 35,000 crore by 2024-2025 but will also become a net exporter of defence equipment.