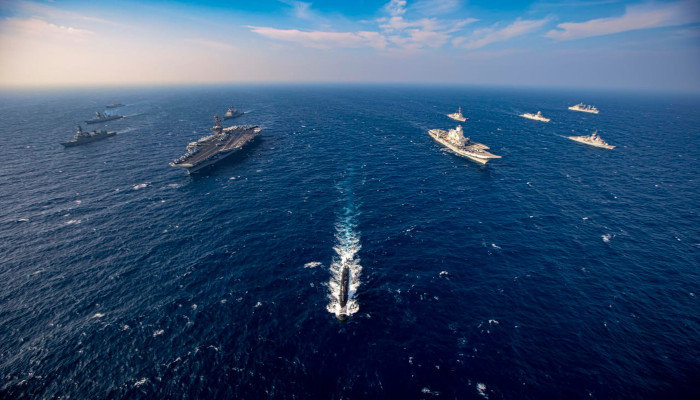 Hindsight, it is said, is 20/20.  Yet, in one of life’s little ironies, year 2020 with the titular homonym (20/20 denotes perfect vision), still defies comprehension.  A multitude of tumultuous events during 2020, both globally and at the national level, continue to baffle experts even well after the advent of 2021.

Amidst these crises in 2020, the Indian Navy was the proverbial beacon, assiduously executing its mandate and beyond, with indefatigable attitude and composed demeanour that has come to define it. During his Navy Day address on 4 December, Naval Chief Admiral Karambir Singh succinctly summarized the Indian Navy in 2020 as – Combat-Ready, Credible & Cohesive.

Indian Navy is the pre-eminent maritime status-quo power in the Indian Ocean Region (IOR).  Faced with an unexpected global pandemic and a virus which is particularly virulent onboard ships (Diamond Princess, USS Theodore Roosevelt etc.), Indian Navy was quick to implement stringent guidelines.  This enabled retention of full operational capability even during the peak of the pandemic, with seamlessly-networked naval platforms deployed across the IOR providing maritime domain awareness and posturing intent.

Additionally, the Navy maintained enhanced preparedness throughout 2020 due to the ongoing CCP threat.  Periodic firing of long-range precision weapons was undertaken during fleet deployments to hone ‘Ordnance on Target’ skills, and for strategic signaling to potential adversaries.  Contingencies across emergent spectrum of operations were also war-gamed during a Table-Top exercise last year which will continue to be refined during pan-Navy Theatre-level Exercises such as TROPEX, to be conducted in the near future.

Towards acquiring force-levels to deter adversaries and meet its expanding range of missions, the Navy continues to progress long-term perspective plans for its arsenal.  During 2020, while most industrial activity was stalled, construction of 41 ships and submarines at Indian shipyards under Atma Nirbhar Bharat was progressed relentlessly by the Navy.

The Navy’s credibility, both nationally and overseas, was visibly enhanced by its synergised response to the pandemic.  At a time when many foreign navies were struggling to contain the virus onboard their platforms, Indian Navy led the national effort to repatriate distressed citizens from IOR nations by sea, flawlessly executing Op Samudra Setu to bring home 3,992 nationals onboard its warships. As ‘Care-Givers’ during the pandemic, the Navy also innovated various products such as air-evac pods, PPE, oxygen manifolds etc ., (which were also provided to IOR nations), met air-lift requirements within the country, maintained warships on stand-by for COVID-related national missions and also provided naval hospital and quarantine facilities to civil administrations.  Naval assets also continued to provide SAR, diving and humanitarian assistance to citizens during cyclones, accidents and floods.

In accordance with the Navy’s Mission-Based Deployments, combat-ready platforms were deployed throughout 2020 at strategic chokepoints across the IOR.  These platforms were often re-deployed to address emergent contingencies: Op Vanilla in Madagascar (post cyclone Diane), MV Wakashio grounding in Mauritius, fire-fighting and salvage of MT New Diamond off Sri Lanka and assistance to MV Anastasia-1 off Andaman Islands, thus reinforcing the Navy’s resolve to be First Responder in the region. Further, Naval warships contributed towards nation-building by ensuring unhindered movement of maritime trade in the critical waters of Strait of Hormuz– Op Sankalp continued throughout 2020; the Navy’s warships have escorted over 170 Indian Flagged vessels carrying nearly 2 crore tonnes of cargo since June 2019.  Indian warships also remained continuously deployed in the Gulf of Aden on anti-piracy patrol (nearly 90 warships have been deployed since 2008).

As part of PM’s vision of SAGAR (Security And Growth for All in the Region) and our reputation as the Preferred Security Partner, the Navy’s warships undertook three COVID-related outreach Missions to provide food and medical aid; SAGAR-I to five IOR nations, SAGAR-II to four East African nations and SAGAR-III to three South-East Asian nations.  The Navy also deployed a warship in the conflicted waters off Somalia to escort food-aid vessels of UNWFP, the 2020 Nobel Peace Laureate.

Capability and capacity building assistance to partner nations continued unabated in 2020: provisioning of Dornier aircraft to Maldives,  refitting of Maldivian warships Huravee and Kamiyaab, installation of coastal radar systems for IOR partners, IONS Working Group meetings, high-level tele-conferences on mutually beneficial issues, information sharing through IFC-IOR, repair of maritime assets, training of foreign naval personnel (both online and at training facilities in India), 37 SAR and MEDEVAC missions, hydrographic surveys and signing of agreements such as BECA, ACSA and MLSA, to name a few.

A multi-dimensional force capable of operating above, below and on the ocean surface, over land, across the electronic spectrum and also in space, the Navy undoubtedly has some of the world’s finest combatants.

Trained across nearly 40 institutions across the country, including at the eponymous Indian Naval Academy, the Navy’s highly-motivated women and men ensured the nation’s maritime defence and furthered its maritime interests during 2020.  Post 26/11, the Navy was specifically mandated to ensure overall maritime, coastal and offshore security of the nation, a responsibility being fulfilled 24×7 in concert with over 20 national agencies.

Due to the unique nature of its operating environment, the Navy has traditionally been the primary enabler of military diplomacy, engaging with like-minded navies to facilitate a rules-based order and counter threats in the maritime domain, both traditional and non-traditional. In consonance with foreign policy imperatives and towards enhancing mutually-beneficial maritime partnerships within COVID-related restrictions, the Navy engaged with partners using ‘non-contact’ format in 2020: Joint multi-format exercises with Oman, Russia, Japan, Bangladesh, France, USA, Australia, Singapore, Thailand and Myanmar; Passage exercises (PASSEX) with France, Japan, USA, Australia and Vietnam; Coordinated patrols (CORPAT) with Indonesia, Thailand, Bangladesh and Myanmar; and Joint EEZ surveillance with Maldives, Seychelles and Mauritius.

2020 marks the end of a remarkable decade for the Indian Navy, during which it transformed into a pre-eminent and trusted stabilising force in the Indo-Pacific in keeping with the Prime Minister’s vision of SAGAR.  While the last year of the decade proved to be most challenging; the Navy can look back with satisfaction and enter the third decade of the 21st century as a force which is truly Combat-Ready, Credible and Cohesive.