India’s first indigenous machine pistol developed by Defence Research and Development Organisation (DRDO) and manufactured by Lokesh Machine Limited was the showstopper at the International Police Expo. The 7th edition of the International Police Expo showcasing the latest technologies including hi-tech arms, drones and equipment related to defence and law enforcement for homeland security was held on 6-7 July in New Delhi.

The automatic weapon has been developed in a record time of four months with the help of the Indian Army. Infantry School, Mhow and DRDO’s Armament Research and Development Establishment (ARDE), Pune have designed and developed this weapon using their respective expertise in the complementary areas. The Machine Pistol fires the in-service 9mm ammunition and sports an upper receiver made from aircraft-grade Aluminium and a lower receiver of carbon fibre. The 3D Printing process has been used in designing and prototyping various parts including trigger components made by metal 3D printing.

“This is also likely to find huge employability with the Central and State Police organizations as well as VIP protection duties and Policing. We are getting very encouraging responses from various police organisations as this weapon is 100 per cent designed, developed and manufactured in India,” said M Srinivas, Director, Lokesh Machine Ltd.

According to the manufacturer, the pistol is extremely compact, light and very easy to use. It is extremely safe as no misfire or accidental firing occurs. The weight of this sub-machine gun or machine pistol is less than 2Kg, a typical older version 9mm weapon is 3.5 kg more and has an effective range of 100 meters. The Ministry of Home Affairs (MHA) conducted trials involving several agencies such as BSF, CRPF, CISF, and NSG at ARDE, Pune in January this year. All of them were satisfied there were no stoppages reported during tests and the final report is awaited before mass production begins, informed the Hyderabad-based company’s Director. 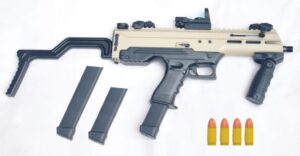 The 9mm pistols available in India are imported and this is the first time that it is being developed and manufactured in India. Indian armed forces have been buying it mostly from Germany and Israel and eagerly waiting for an Indian version of this weapon. “Most of the weapons coming from outside, do not easily handle Indian ammunition……there could be some glitches…..but our weapon is tailor-made for Indian conditions, and all police agencies who looked at our weapon in the exhibition asked – is it available in the market? There is an immediate requirement, and we are geared up for small mass production and as demand picks up, we can increase the numbers,” said Srinivas. However, the manufacturer is still awaiting a license to manufacture which will take another three months or so due to procedural clearances.

There is a huge demand for this kind of weapon in India and would be 35-40 per cent cheaper than the imported versions. The Machine Pistol is likely to have production cost under Rs 50,000 each and has potential for exports.
The spotlight of the two-day event was on ‘Importance of New Technology for Policing and Internal Security’. Over 300 Indian manufacturers, including more than a dozen from foreign countries, displayed their products in the exhibition. According to the organisers, International Police Expo is an interactive platform for police representatives and technology suppliers that provides business opportunities related to internal security, training, protection, and rescue.