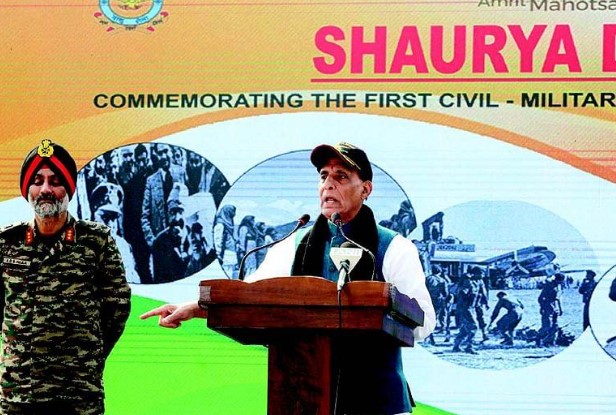 Defence Minister Rajnath Singh on 27 October said India’s goal is to reclaim areas such as Gilgit and Baltistan in Pakistan-occupied Kashmir (PoK) in accordance with the 1994 Parliament resolution. He said, “we have just begun our journey of development in J&K and Ladakh. We will achieve our goal when we reach Gilgit and Baltistan,” while speaking at ‘Shaurya Diwas’ or ‘Infantry Day’ celebrations to commemorate the 75th year of air landing operations of the Indian Army at the Old-Air Field, Budgam in Srinagar.

Infantry Day is observed as a remembrance of the first military operations of independent India, when the Indian Army repelled the first attack on Indian soil on 27 October 1947 by Pakistani armed tribesmen in the Kashmir Valley, a day after the “Instrument of Accession” was signed between Maharaja Hari Singh and Republic of India. The personnel of the First Battalion of the Sikh Regiment accomplished the victory.

The Defence Minister accused Pakistan of torturing and harassing the people of PoK, said Islamabad “is sowing the seeds of hatred and time is not far when people will resort to mass rebellion there”. He added that “people of PoK are being deprived of all basic rights, and we are fully aware of it”. He asked Pakistan to stop shedding crocodile tears in the name of human rights, saying it’s double-talks about crushing terrorism and backs terrorists in Jammu and Kashmir.

Rajnath Singh said Indian infantry has been associated with utmost courage and professionalism, and the nation salutes their bravery, sacrifice and service. In 1947, he said the Army gave a befitting reply to enemies trying to occupy Kashmir illegally. This year’s Shaurya Diwas marked the the75th anniversary of the arrival of the 1st Sikh Regiment at the old airfield of Srinagar in 1947 to protect Kashmir from Pakistani invaders.

Indian Army organised the event as part of ‘Azadi Ka Amrit Mahotsav’ and witnessed the re-enactment of the historical events. Enactments included Budgam landings, covering the violation of the “Standstill Agreement” by Pakistan and an airshow organised by the Indian Air Force to pay obeisance to the brave soldiers and people of Jammu and Kashmir who laid down their lives and also to honour the next of kin of war heroes who participated in the 1947-48 war. Lieutenant Governor Manoj Sinha, Chief of Army Staff General Manoj Pande, GOC-in-C, Northern Command Lt Gen Upendra Dwivedi, Air Officer Commanding-in-Chief Western Air Command Air Marshal S Prabhakaran, GOC 15 Corps Lt Gen A D S Aujla also attended the event.