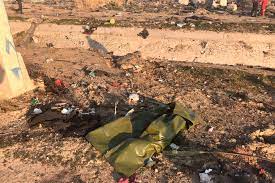 Justice For The Victims Of Ukrainian Flight PS 752

On 8 January 2020, 176 people, the entire crew and passengers of a Ukraine International Airlines aircraft, died as two missiles blew the aircraft apart. The article uses the incident as a pivot to reflect on the lack of accountability of States. The Iranian government, in spite of accepting the error, has refused to negotiate any further with the International Coalition and Response Group that was formed to protect the interests of the victims and their families.

When wars and conflicts take place in society and nations fight with each other over territories, ideology and resources, casualties occur and people suffer for generations to come. When innocent lives are lost due to miscalculations or unforeseen situations during conflicts, the burden for their loss invariably goes unnoticed and unpunished. In today’s age of digital media, TRPs and short-term memory of past follies are consigned to oblivion and justice is invariably denied to the victims’ families unless the losses are colossal. While international courts and tribunals have a limited remit over nations to ensure compliance, leaders fail to take ownership and responsibility for the loss of innocent lives.

A little over two years ago, on the morning of 8 January 2020, a Boeing 737 800 of Ukraine International Airlines Flight PS752 from Teheran’s Imam Khomeini International Airport to Canada via Kiev was shot down just six minutes after take-off. All 176 people on board the flight perished in the accident. Initially, there was a lot of confusion, with Iran refusing to acknowledge its role in the shooting down of the airliner.

Relations between the United States and Iran had come to a pass with the assassination of the Iranian Quds Force Commander Maj Gen Qasem Suleimani on 3 Jan 2020 at Baghdad International Airport by a drone strike, authorised by President Donald Trump. Designated as a terrorist by the United States and Israel, Suleimani worked closely with Iraqi and Lebanese allies, nurturing proxy forces to form a Shiite axis of power in the region which was instrumental in propping President Bashar al-Assad of Syria.

American officials including the Pentagon had long-held Suleimani responsible for killing hundreds of Americans in the Iraq war by providing training and equipment to Iraqi insurgents. The United States held him responsible for destabilising the region by activities aimed against the US, Israel and Saudi Arabia. Trump’s critics called the strike a “reckless escalation.” Iran’s supreme leader Ayatollah Khomeini called for “forceful revenge” while declaring three days of national mourning.

The reprisal by Iran came a few days later after midnight on 8 January 2022, in an operation code-named ‘Martyr Suleimani’ wherein the Iran Revolutionary Guard Corps launched 12 ballistic missiles over airbases in Western Iraq housing American troops. While no casualties were reported many soldiers were injured and this unnecessarily exacerbated tensions in the region. The high state of alert, a few hours later led to the shooting down of the Ukraine Flight PS 752 by a Tor M1 Air Defence system which fired two SA 15 missiles in quick succession, apparently mistaking the radar blip as a cruise missile fired by the American forces as retaliation to the Iranian missile attack.

A majority of the people travelling on the flight were Iranians residing in Canada who had come home for Christmas vacations, visiting friends and relatives. Some had just got married, while others were students studying in Canada. Iranian officials continued to maintain that the flight had probably crashed due to some catastrophic technical failure until increasing international outrage, accusations, and preliminary evidence, which pointed to the fight having been shot down. Iran finally admitted on 11 January 202 that the airliner had indeed been shot down by two Russian manufactured air defence missiles.

Iran, in a letter to the United Nations, termed the missile attacks on the US airbase in Iraq as a ‘measured and proportionate’ act of ‘self-defence’ that ‘was precise and targeted military installations with no damage to civilians and civil assets in the area.’

While soldiers in conflict zones and insurgents in disturbed areas, including government officials, are aware of their occupational risks and know what they have signed up for, innocent citizens travelling by air do not deserve the fate that passengers of the ill-fated flight met on the morning of 8 January 2022. After the sudden and unexpected withdrawal of the United States from the Joint Comprehensive Plan of Action with Iran in 2018, leading to fresh sanctions being imposed on Iran, it’s economy which had started to look up after the agreement, once again suffered, plunging the country into turmoil.

Meanwhile, an International Coalition and Response Group, which was formed to protect the interests of the victims and the families of the ill-fated Flight PS 752, continued to negotiate with the Iranian government for reparations and justice. Iran, in a recent statement, categorically refused to negotiate with the group any further. Accountability for the actions of the civil and military officials that caused this tragic crash has still not been determined, even two years after the accident.

There were 82 Iranians and 63 Canadians on board the flight, many holding dual citizenship of Iran and Canada. The leadership of any country has the moral responsibility to ensure justice for its citizens. Global powers with military presence around the world deploy forces to protect their interest and those of their allies while ensuring that innocent citizens do not pay the price for their follies.

The loss of faith in leaders and international organisations does not happen overnight. It is only when they are not able to live up to the expectations of the citizens in an increasingly globalised and yet paradoxically insular world, post the COVID pandemic. It leads to questions that seek answers from the leaders who desire to dominate the world with their military, diplomatic and economic might. The pain and grief suffered by the families of the victims of Fight PS 752 may have receded from the TRP driven media, but the dispensation of justice and accountability for the loss of 176 lives, although minuscule in comparison to the number of lives lost across the world every day, would go a long way in making this world a just and equitable place.