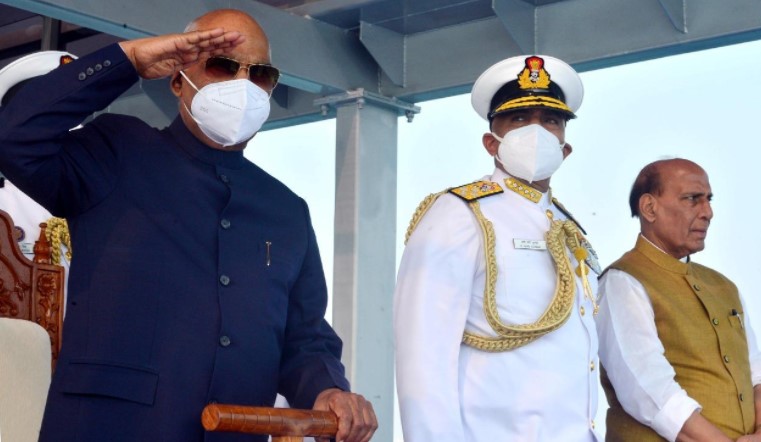 India’s maritime defence might was on full display as President Ram Nath Kovind, the Supreme Commander of the Armed Forces of India, took the salute at the Fleet Review off the Visakhapatnam coast in the Bay of Bengal on 21 February. With the theme ‘75 years in Service of the Nation,’ Indian Navy showcased its latest state-of-the-art indigenously built combat platforms during the 12th edition of the Fleet Review which was also witnessed by Defence Minister Rajnath Singh.

Sailing on the indigenously designed Naval Offshore Patrol Vessel INS Sumitra, designated as the Presidential Yacht, President Kovind sailed past 44 ships anchored in four columns in the Bay of Bengal and received the ceremonial salute from each one  of them. As the Presidential yacht passed between the review columns, each ship dressed in full regalia, manned by her ship’s company saluted the President with traditional “Three Jais” in a demonstration of the unconditional allegiance to the country and the Supreme Commander. The President’s Fleet Review 2022 provided an insight into the Indian fleet’s strength, capability and also unity of purpose.

The President also witnessed demonstrations in the form of a composite fly-past by 55 aircrafts including Chetaks, ALH, Sea Kings, KAMOVs, Dorniers, IL-38SD, P8I, Hawks and MiG 29K. During the final stage of the review, a mobile column of warships and submarines carried out high-speed steam past alongside the Presidential yacht. Several enthralling waterfront activities like Parade of Sails, Search and Rescue Demonstration at Sea, Aerobatics by Hawk aircraft and Water Para Jumps by the elite Marine Commandos (MARCOS) held the guests mesmerised.

Following the inspection of a spectacular naval show of strength, President Ram Nath Kovind praised the Indian Navy’s constant vigil in protecting the Indian Ocean Region. He also said that India has become a preferred security partner in the region, because of the Navy’s prompt and effective deployment. He stated that the “prompt and effective deployment of the Indian Navy in times of crisis has underscored India’s vision of being the preferred security partner and first responder in the Indian Ocean Region”.

“I am pleased to review the readiness of the Indian naval ships, submarines, aircraft and other elements of our maritime power today,” he said. 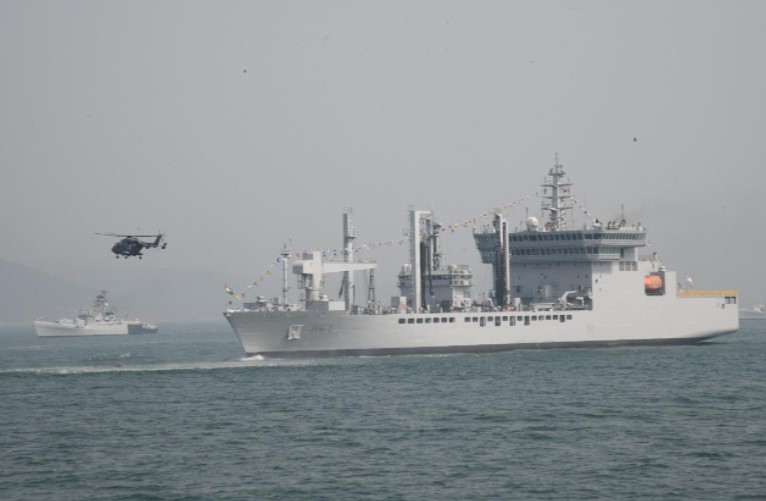 Regarding the Navy’s relentless push to make a large number of its ships Indigenously, Kovind highlighted that its “becoming increasingly self-reliant and has been at the forefront” of the government’s Make in India initiative. “I am told that about 70 per cent of the contents of several warships and submarines under construction in various public and private shipyards across the country are indigenous. It is a matter of great pride that India has built nuclear submarines and soon we will have our indigenously built aircraft carrier, Vikrant, joining the service.”

The Navy also engages with a large number of other navies of the world regularly, he said, as part of bilateral and multilateral exercises. “The aim is to enhance interoperability, gain from best practices, develop common understanding and build mutual confidence to address maritime issues,” the President said and conveyed his wishes for the forthcoming multinational naval exercise Milan 2022, in which more than 35 navies from the world are expected to take part later this week.