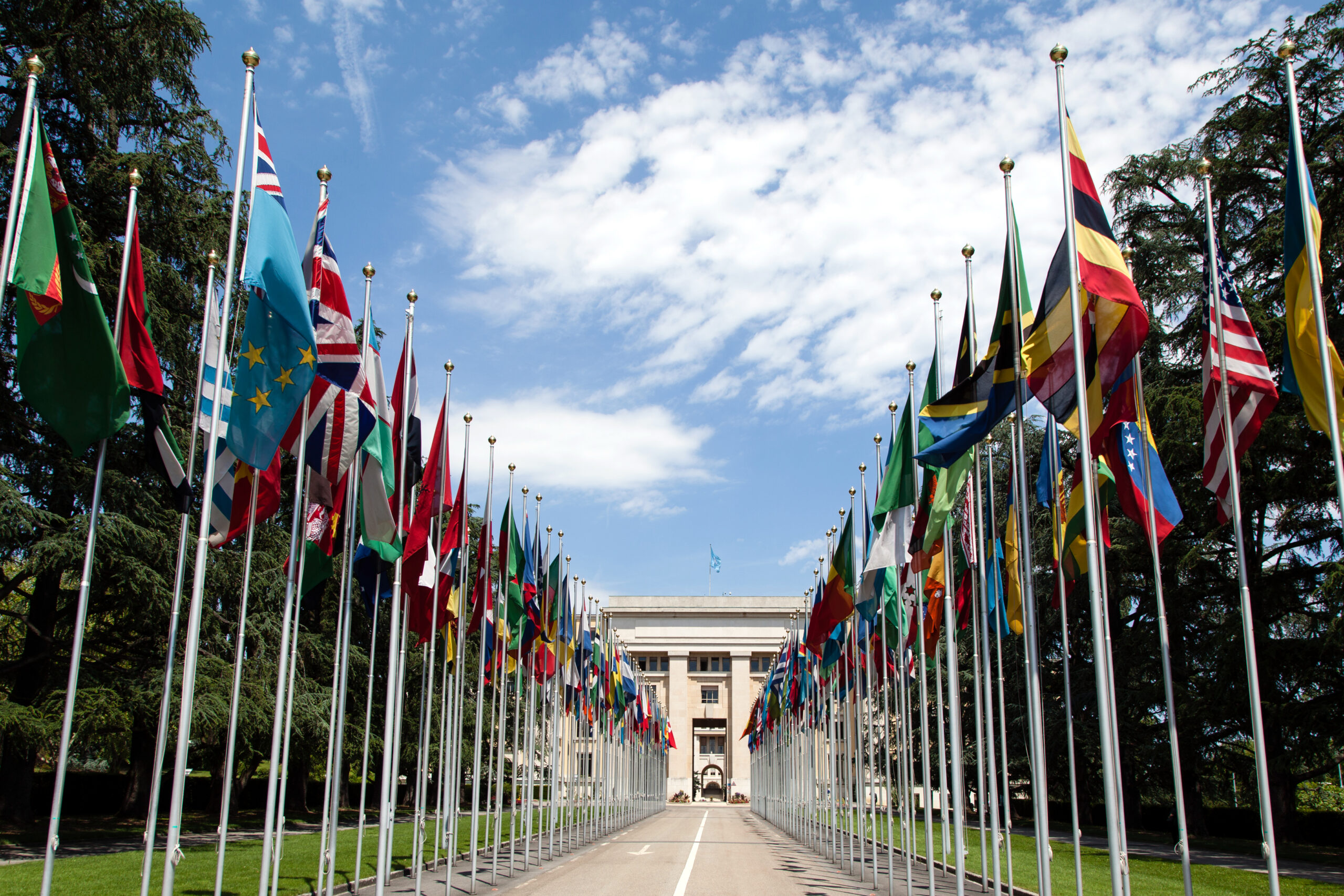 “Multilateralism, the process of organizing relations between groups of three or more states. Beyond that basic quantitative aspect, multilateralism is generally considered to comprise certain qualitative elements or principles that shape the character of the arrangement or institution. Those principles are an indivisibility of interests among participants, a commitment to diffuse reciprocity, and a system of dispute settlement intended to enforce a particular mode of behaviour.” – James Scott

Since independence, India has been plagued by two constants: poverty and hostile borders. Though seemingly exclusive, the economic correlation is indisputable. The champions of the “Guns vs Butter” debate argue that the billions spent on defence could easily alleviate millions out of poverty through education, opportunities and multiple other means. The idea is truly romantic, but as in life, we cannot choose our neighbours. When a nation’s borders are aligned to two extremely revisionist states insurance for national security must be paid. This is quite an indisputable argument especially in a country whose politico-geographic identity was dismembered by military, cultural and economic hegemony throughout recorded history.

A common thread that binds Indian foreign policy since the Nehruvian days is “Non-Alignment”. In the cold war years, India aligned itself to opportunity rather than ideology. It worked well for some time. Both the West and Soviets at different times were benevolent to India’s interest. India also avowed to steer clear of all multilateral defence pacts. Until very recently, it was extremely rare an occurrence that India would participate in a tri-service multilateral military exercise, leave alone sign defence pacts. But in the last few years all that has changed.

From bilateral logistic arrangements to polarizing and directed multilateral foreign policy initiatives and pacts, it seems the tide is gradually moving towards a multilateral approach to taming its foreign policy woes. With a resurgent China clamouring to create a Bipolar World with Unipolar Asia this seems to be just the beginning. Hence, the argument that probably it’s time to shed the veneer of a noble idea of “Going it Alone” and commit to a more multilateral approach to tackling the changing world order, while of course maintaining strategic autonomy.

Diplomatically, for a non-super power or a non-P5 state like India, being part of a multilateral arrangement can facilitate political power in the international arena, which would not be possible unilaterally. India’s weight in international diplomacy is at a high, yet it faces tremendous challenges while countering stronger political and economic adversaries. Usually, India looks towards the USA or France to do the heavy lifting on the diplomatic front and assist its interests, but there is no guarantee of support from these nations. This is further complicated given the turbulence and compulsions of domestic politics, which may run contrary to Indian interests.

A ‘pact’, however, allows for a predictable nature of international influence and support which is a necessity for a country like India. A treaty of multilateral engagement allows India an opportunity to negotiate or posture better on difficult issues with tacit understanding/support from the international powers as part of a pact.

Embracing multilateral arrangements allows India to unshackle the perception of being a reluctant power. And perceptions matter on all negotiating tables. The media and opinion-makers with a clearer line of thought and action would be better disposed towards India’s perspective than otherwise when India is often seen as a hollow crusader.

Militarily and economically, the impact is likely to be the greatest. Indian military claims and would likely hold its own against its adversaries. There is no reason not to trust this yet there is enough reason to ask the cost of this in terms of economic resources and human lives. Multilateralism provides an oxymoronic yet effective solution to the economic and military aspect of protecting national sovereignty.

Let us examine Europe after WW2. It was poor, it needed to develop economically, it had multiple sovereign nation-states and it was threatened greatly by a powerful military and an ideologically entirely different adversary. Yet, the threat never manifested. The nations prioritized and allotted a significant budget to economic development and other drivers of inclusive growth and the rest, as they say, is history. What made it possible was that these countries were part of a strong multilateral alliance of ideological partners who mostly shared a fairly overlapping vision.

The alliance protected them by being a deterrent, allowed them to balance development with security without the economic burden that going it alone would have cost and eventually proved adequate to keep the common adversary at bay. The politico-military benefits of multilateral security arrangements are obvious, but the economic, technological and ideological benefits are the real binders.

The two main arguments thrown against multilateralism from an Indian security perspective are Geography and Sovereign Autonomy.

The arguments highlight that India’s adversaries are its geographical neighbours and when push comes to shove India will have to go it alone. This is an absolutist argument imagining that the partners would abandon India in the times of crisis while the Indian military would have to fight it alone; under-equipped and unprepared. The counter to this is if deterrence does not work (as it did in Europe), then let’s talk about the Gulf War in 1991. Kuwait was liberated by NATO forces led by the US despite not being part of NATO. Yet, forces were mobilized across the world against the Iraqi hegemon. Even if this seems too far fetched in the Indian context, the greater advantages of a formal multilateral alliance are those delivered in skills and technology which improve the fighting capability of the Indian military while keeping the costs low.

India has prided itself in preserving its strategic autonomy within the comity of nations. However, if India’s voting record in the UN against traditional and cultural allies is taken into account, we see pragmatism lording over the rhetoric or sometimes even ideology. So to some, it may appear that the bluster of strategic autonomy is a charade to allow India to hedge its bets. Not a bad ploy, but metaphorically, sometimes the chickens would come to roost and then the call will have to be made and the whole glasshouse collapses. Then there is France, who despite being a staunch NATO and EU member has time and again followed a path quite the opposite of its alliances. The point to be made is that in an alliance of ‘near’ equals, ideologically if not militarily, the compromise on core national interests is a bogey. India would rather be well served by being part of an alliance and internally challenging the direction than being a fence sitter outside.

Connected to this is also the question of India being bent against its will to deploy military resources in faraway lands in prejudice to its bilateral relationship with that country? We may look at it as a necessary evil or a bitter pill, but history shows that in the long run that the nations and civilizations that have the capability to and do project power, survive and flourish while others wither away. Again, France would be a worthy example of not allowing the pressures of a multilateral alliance to dictate the deployment of its troops.

India joining or co-founding multilateral security and/or economic alliance is an idea whose time has come, and it is now. If the Atom bomb was the greatest deterrent of the previous century, multilateral security arrangements are for this. In absence of a real diplomatic or economic leverage against its adversaries and the economic and social woes that the pandemic has created, this bullet would be easy to bite. The gains are many and the challenges few and mostly hypothetical. It’s time India unshackles itself from the policies of the past and embraces the new world as a confident player, sure of its own abilities and has faith in its team members. The deterrence against a larger power doesn’t come through trying to match its guns, it does from having friends in an ironclad pact willing to stand up for you.

Colonel Nikhil Apte (Retd) is a third generation Army officer, with his father and grandfather serving in the Indian and British Indian Army respectively. Having done his schooling all over India, he graduated in Chemistry from St Xavier’s College, Mumbai in 1998.