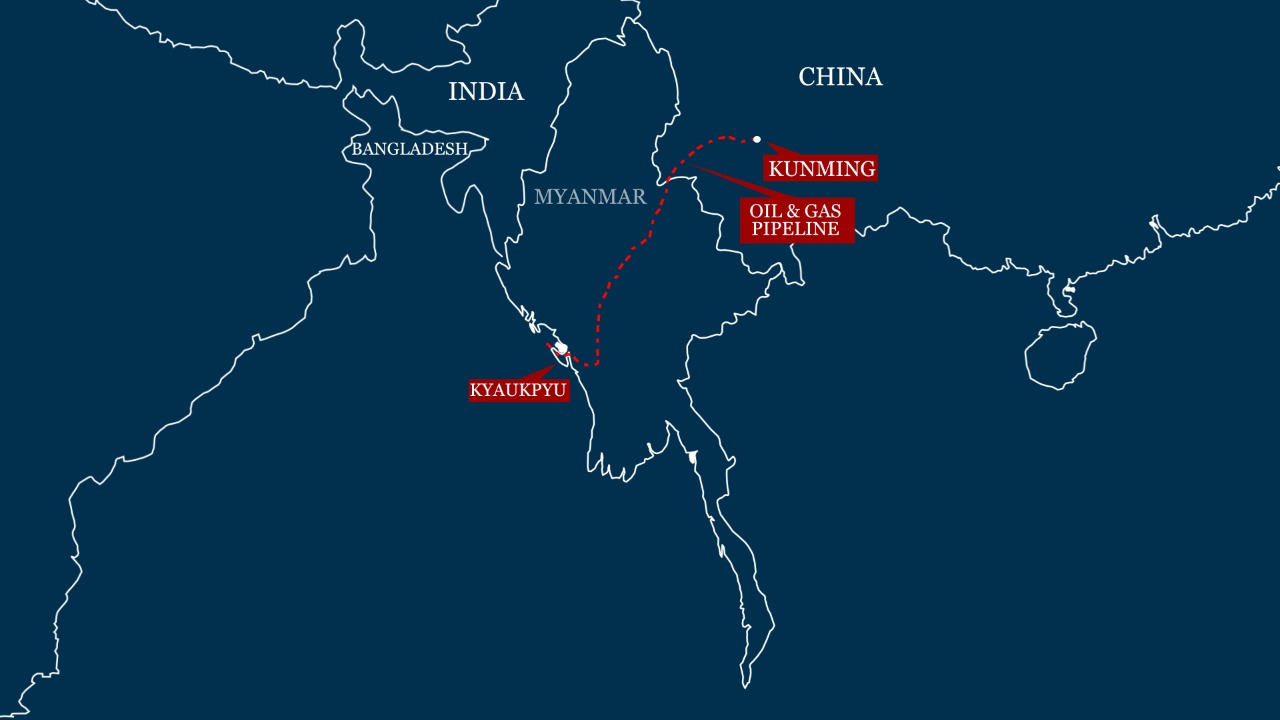 As the world focuses on Human Rights violations in Myanmar, there are major issues in that country and doings of the military regime that go unnoticed. The Chinese have crept in to debilitate the country’s sovereignty, with the Myanmar military being partners in the scheme. Strategically, the most important project that China has been involved in Myanmar is the Myanmar China Oil and Gas Pipeline (MCOGP).

The gas pipeline starts in the Shwe gas field located in the Bay of Bengal, essentially a group including the gas fields of Shwe, Shwe Phyu and Mya in the Andaman Seas. It traverses to the Kyauk Phyu deep seaport in Rakhine state. The oil and gas pipelines run parallel across Myanmar to the northeast and enter China to go further to Wandung, Kunming and Nanning. The pipelines are expected to deliver 12 billion cubic meters of gas and 22 million tons of crude oil to China every year. China requires huge volumes of both to feed its power-hungry manufacturing industry and provide continuity to its growth curve.

The oil pipeline is jointly invested and built by CNPC and Myanmar Oil and Gas Enterprise, Daewoo International, KOGAS, Indian Oil and GAIL and a few more investors, according to CNPC.

Post completion in 2015 the project was reviewed by a civil society organization, Myanmar China Pipeline Watch Committee (MCPWC). It submitted a report in 2016. The report highlighted major violations in areas of land use, corruption, compensation and ecological aspects.

Ministry of Electricity and Energy (MOEE), Myanmar has stated that the land was acquired by CNPC directly from the landowners and it had saved the Myanmarese government a huge amount. However, the transfer of land was not done as per the provisions of Myanmar’s Immoveable Property Restriction Act 1987; Foreign Investment Law (2012), and Farmland Law (2012). Finally, the Myanmar government had to change the title of the land from farmlands to other lands to enable the legal tenability of the acquisition by the Chinese.

The CNPC’s stance is that ‘The pipeline project team handled land acquisition issues based on the principle of “voluntary decision” and “minimal impact on farmland”, and paid compensation for the converted land in a fair, transparent and legal manner. We reroute the pipeline whenever the land conversion scheme is declined by local residents or wherever a stupa, temple, school, graveyard or wildlife reserve stand on the route.’

An important aspect was the fact that the Chinese have acquired 30 metres of land astride the pipeline dividing the country into two. The west to the east alignment of the pipeline divides Mayanmar into two, with a Chinese owned narrow belt in-between. With China having taken ownership of a narrow strip of land all across from Kayuk Phew on the western coast to the Myanmar- China border on the east, a strip of land all along the pipeline is under China’s ownership.

China imports 95 per cent of its energy raw material by sea. 80 per cent of it passes through the Malacca Strait. These imports traverse the Indian Ocean where Indian or AUKUS or Quad tomorrow, can intervene. A land route, via these pipelines, can definitely not replace, but ease the dependence on the current imports via the sea route for a power-hungry economy. They can serve to enhance capacities and be of use should the Malacca Strait routing be denied to China. Further, pipelines through Myanmar reduce 3,000 km of transit distance and transportation time by five to six days. The stakes are high for China. It’s also an important factor in the security calculus of India, the US and many South China Sea nations for checkmating China.

China and Myanmar went through a long haranguing length of discussions to finalise how much the Chinese would pay as transit charges to Myanmar. The details of the agreement arrived at may not be available, however, the arrangements are unlikely to have been in Myanmar’s favour. Most Chinese projects in other countries in Africa and Asia have led to these countries losing out at the end of it. The Chinese have undertaken large Corporate Social Responsibility projects for people settled along the length of the pipelines, but such benevolence cannot be considered adequate if they have larger geopolitical objectives to ultimately drag a nation into a debt trap.

If the global community only responds by sanctions and ostracizing of Myanmar’s military, it may not be enough. A dialogue with the military and assurance of economic aid subject to a transition back to democratic processes is a necessity.