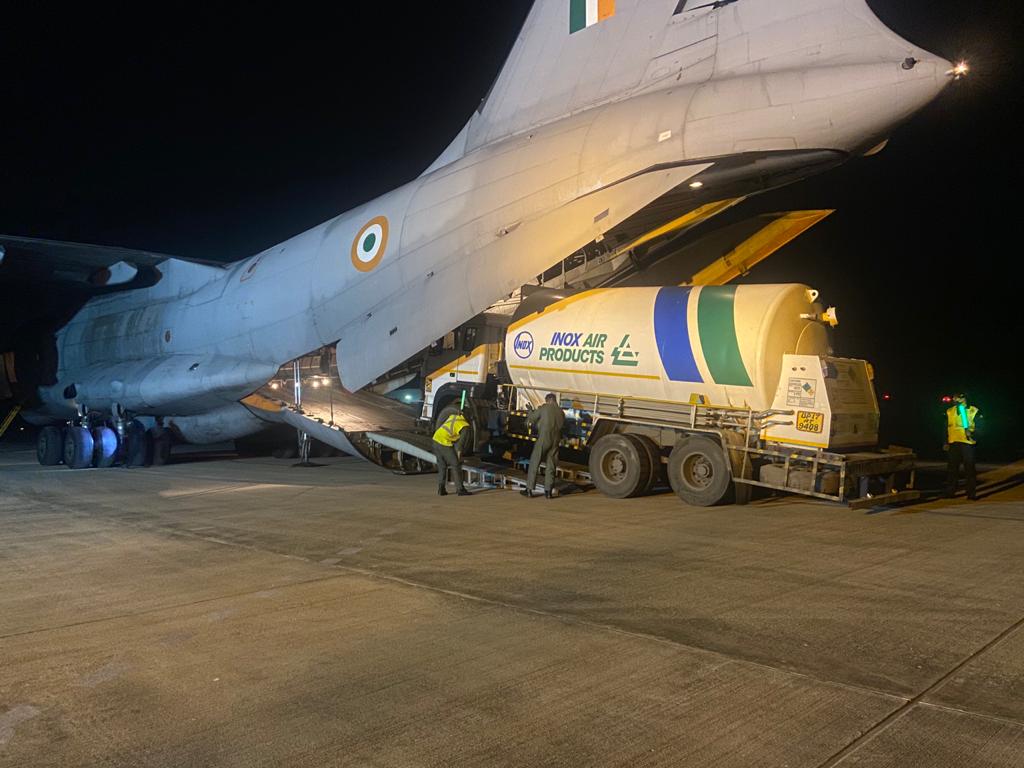 While transport aircraft of the Indian Air Force (IAF) carried out several sorties from Singapore, Bangkok, Dubai and within the country, the Indian Navy despatched four ships, two to the Middle East and two to South East Asia to transport filled Oxygen containers to India. The Indian Navy has now deployed seven warships viz. INS Kolkata, Kochi, Talwar, Tabar, Trikand, Jalashwa and Airavat to transport liquid medical Oxygen-filled cryogenic containers and associated medical equipment from Bahrain, Thailand and Singapore under “Operation Samudra Setu II”.
INS Kolkata and INS Talwar, mission deployed in the Persian Gulf, were the first batch of ships that were immediately diverted for the task and entered the Port of Manama, Bahrain on 30 April, according to Indian Navy sources. INS Talwar, with 40 MT Liquid Medical Oxygen (LMO) on board, is headed back home. 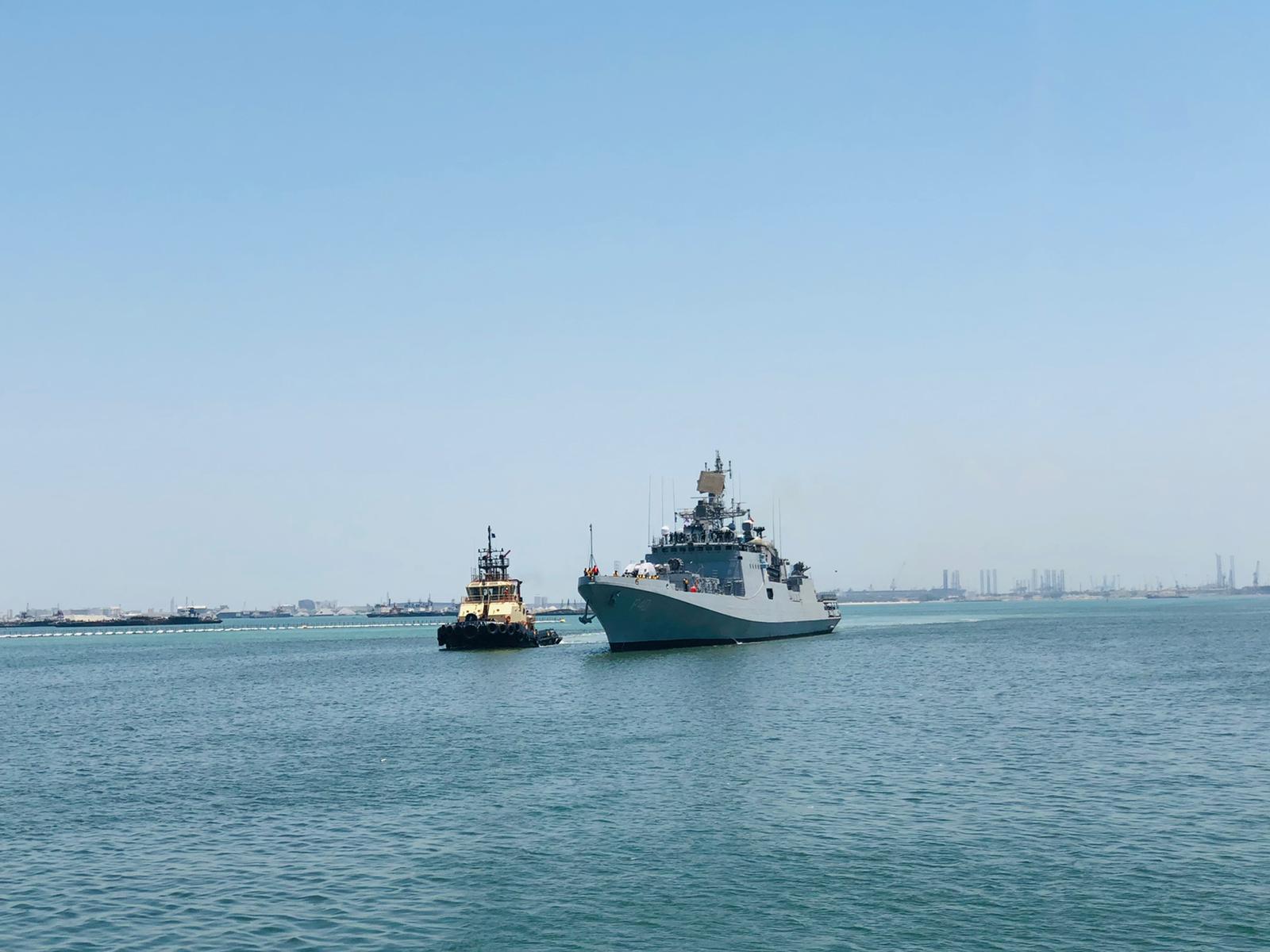 Similarly, on the Eastern seaboard, INS Airavat too has been diverted for the task, while INS Jalashwa, the LPD which played a key role during op Samudra Setu last year, was pulled out of maintenance, readied and sailed out to augment the effort, the sources informed.
The second batch of ships comprising Kochi, Trikand and Tabar, mission deployed in the Arabian Sea, have also been diverted to join the national effort. From the Southern Naval Command, the Landing Ship Tank INS Shardul is being readied to join the Operation within 48 hours.

It may be recalled that Operation Samudra Setu was launched last year by the Navy and around 4,000 Indian citizens stranded in neighbouring countries, amidst the COVID-19 outbreak, were successfully repatriated back to India.

As of 1st May, the IAF carried out 28 sorties from abroad, airlifting 47 Oxygen containers with 830 MT capacity, while from within the country, it carried out 158 sorties, airlifting 109 containers with 2,271 MT capacity. The IAF has employed an IL-76transport aircraft to carry three empty Cryogenic Oxygen Containers from Singapore to India today, informed the Air Force sources.
While the transport fleet of the Air Force continues with its missions for transportation of Oxygen containers and other relief materials, the helicopters are also ready to evacuate casualties from the farthest corners of the country, according to the IAF. Presently eight C-17, four IL 76, eight C130, 20 An-32, 10 DO-228 Dornier aircraft and 20 helicopters are being deployed for COVID tasks. The aircrew for all fleets are activated to ensure round the clock operations, revealed the sources.

The Navy and the Air Force have also supplied nearly 500 portable Oxygen cylinders from their stores to various civilian hospitals. 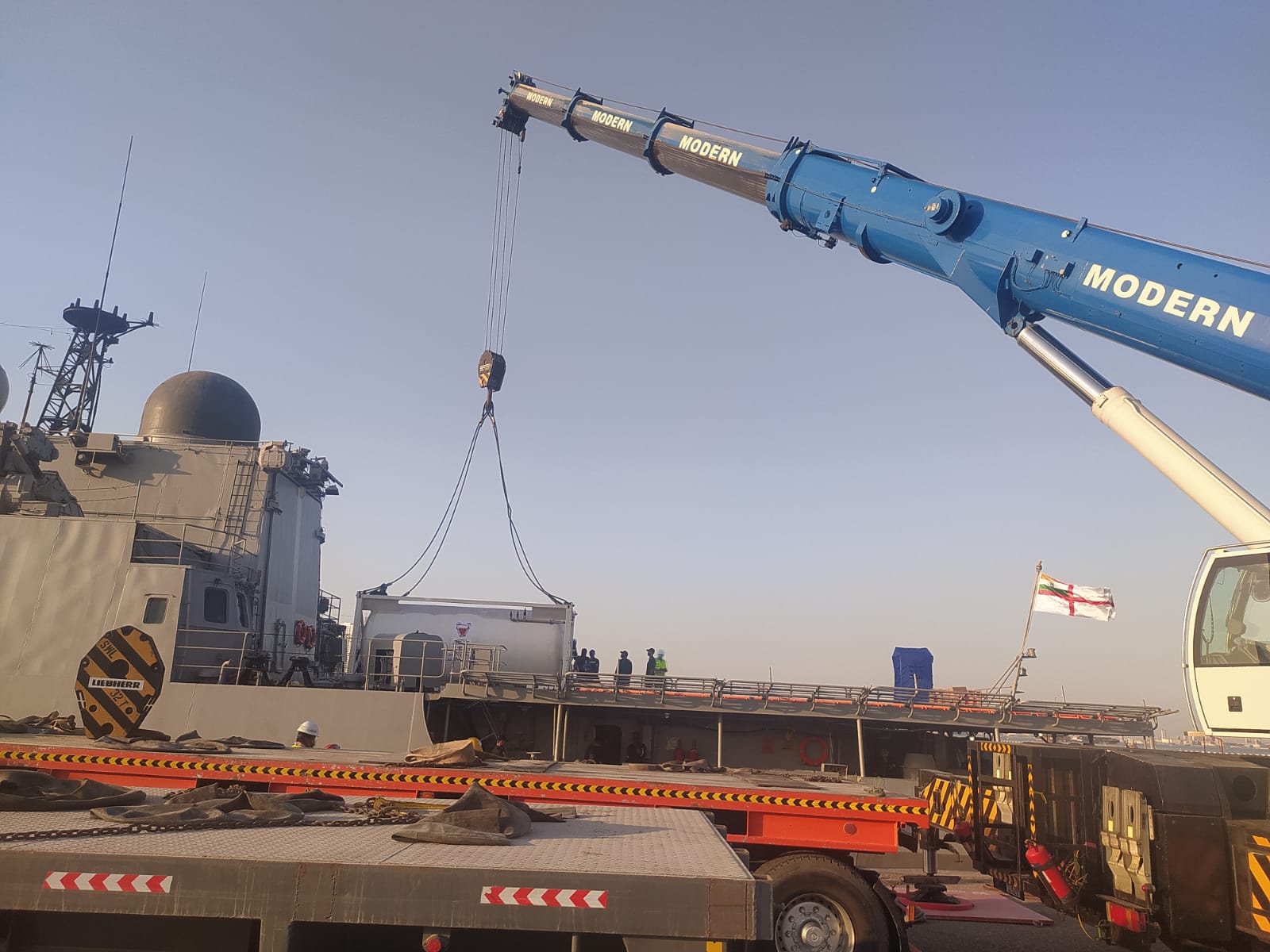 DRDO’s Dr APJ Abdul Kalam Missile Complex, Hyderabad handed over 200 cylinders on 1st May out of which 100 Oxygen cylinders were handed over to the state government of Andhra Pradesh and 50 each to Tirumala Tirupati Devasthanam (TTD) and Secunderabad Cantonment. These cylinders are of 46.7 litres capacity each and can be pressurised up to 150 bars. Each of these cylinders can store 7,000 litres of Oxygen.
The 500-bed hospital being set up by DRDO in Lucknow will start functioning in the next two to three days, according to a statement released by the Ministry of Defence. Another hospital is also being set up in Varanasi which is scheduled to be completed by 5th May. The first four out of 380 Oxygen PSA (Pressure Swing Adsorption) plants being manufactured under the PM CARES Fund will be deployed in hospitals in New Delhi by next week, informed DRDO Chairman, G Satheesh Reddy.

Defence Public Sector Undertakings (DPSUs) are procuring 28 Oxygen plants and other medical equipment worth Rs 40 crore under CSR for supplying to various hospitals in states. Hindustan Aeronautics Limited (HAL) has set up a 250-bed hospital in Bengaluru. Another 250-bed hospital is being set up in Lucknow.

Meanwhile, Defence Minister Rajnath Singh reviewed the efforts of the Armed Forces to support the civilian administration in the fight against the deadly second wave of COVID-19 situation in the country on May Day. He reiterated that the Armed Forces should provide all necessary assistance to a civilian administration and asked the officials of the Ministry of Defence and the three Services to closely monitor the progress of various initiatives.