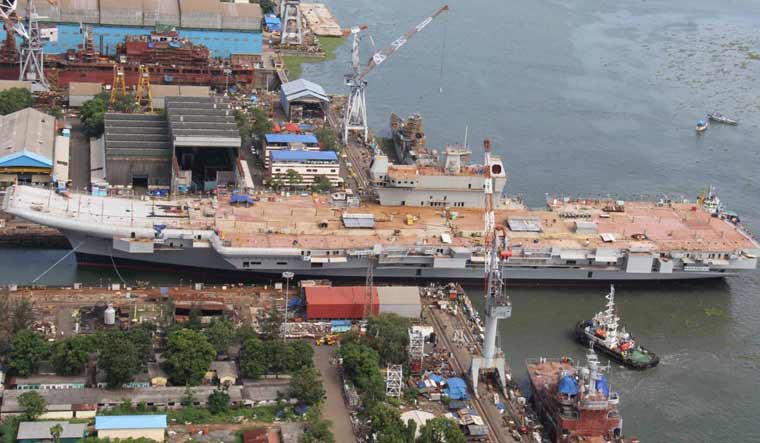 A week after satellite images of China’s second aircraft carrier that was docked at Yulin Naval base at the southern tip of Hainan Island and is all set to join the Peoples’ Liberation Army Navy (PLAN) soon surfaced, Indian Navy has pressed Cochin Shipyard to deliver country’s first Indigenous Aircraft Carrier (IAC) at the earliest. INS Vikrant, weighing 40,000 tons, is being built by Cochin Shipyard Limited.

“We have asked the Cochin Shipyard to adhere to its deadline, as the project has already missed its multiple deadlines. The way Chinese navy is expanding, we also need to expedite our projects,” a senior naval official told The Week.

Last week, satellite images provided by a US-based private firm confirmed the Type 001A carrier with seven Shenyang J-15 fighters and four helicopters visible on its deck. Key officials of the South block, who constantly monitor the developments on Chinese front, claim that that the Type 001A will become China’s second operational carrier after Liaoning, once its gets commissioned. Liaoning was developed on the Soviet Union’s Kuznetsov-class carrier.