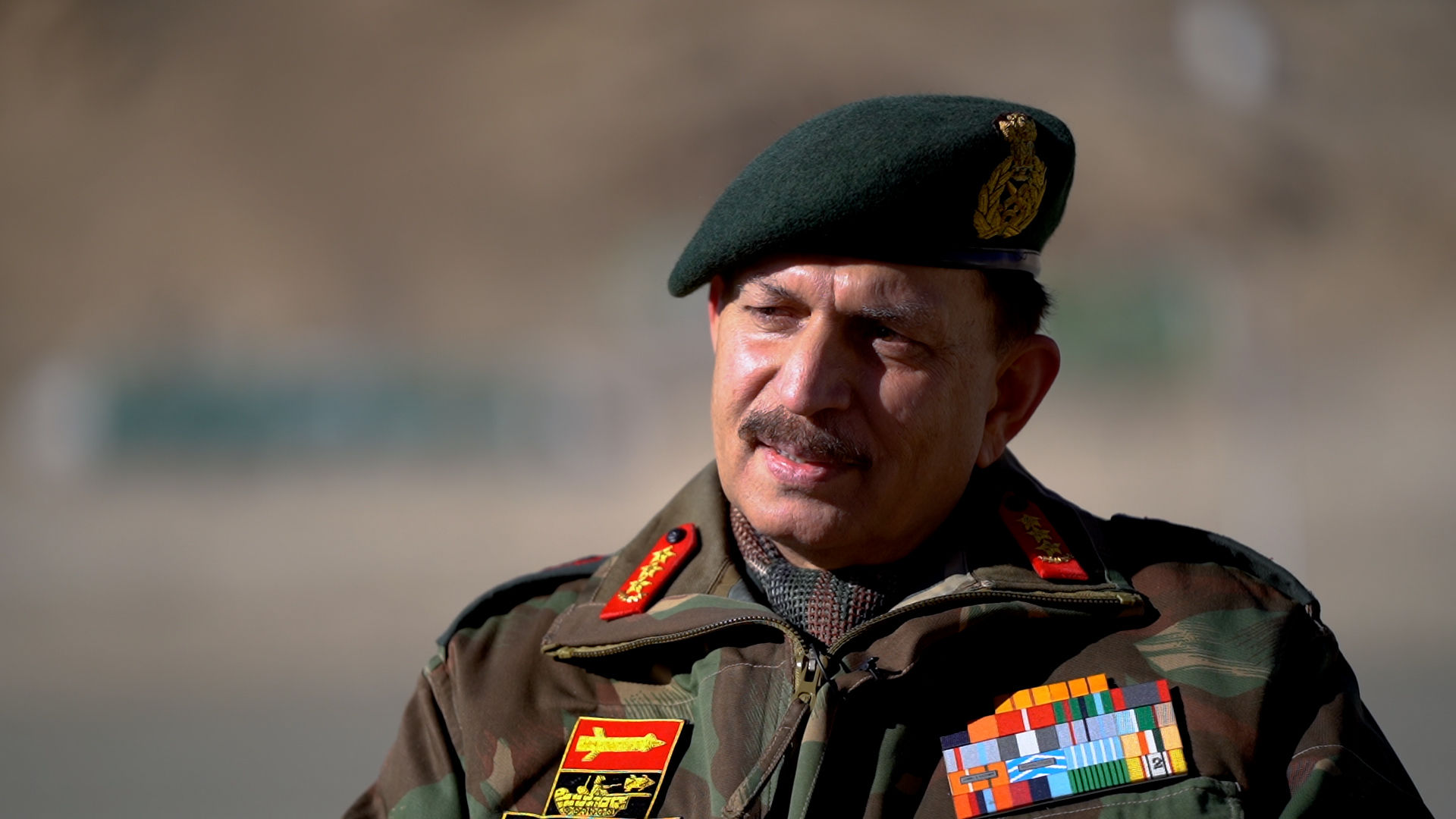 Northern Army Commander: PLA has Gone Behind India’s Claim Line; How are We Ceding?

LEH: For all those who claim India has lost territory by agreeing to the current phase of disengagement that is underway at the north and south banks of Pangong Tso, Northern Army Commander Lt Gen YK Joshi has a question: India’s claim line is till Finger 8; PLA troops have agreed to go behind Finger 8, so how has India ceded territory? Speaking to BharatShakti Editor-in-Chief Nitin A. Gokhale, Gen Joshi details how the disengagement process is progressing and the road ahead. Here’s the transcript of the interview.

Nitin Gokhale: We’re speaking a week after the disengagement process was announced at Pangong Tso, both north and south banks. How is it progressing?

Lt Gen Joshi: The disengagement process started on February 10 and it is progressing very well and very smoothly, to say the least. It was decided that the disengagement process would be in four steps. Before graduating from one step to another, we’re to verify each step on the ground and we’re continuously monitoring and only when both the armies are satisfied that one step has been done to the satisfaction of all of us, the next step will ensue. From the start, we have been continuously monitoring; we have our UAVs in the air, we are getting satellite imageries and have our cameras placed at vantage points.

The day begins with a flag meeting where the entire day’s activities are discussed; though it has already been decided. Towards the end of the day, both sides confirm the activities that have been done, on the hotline. In case there is an issue, we again have a flag meeting, discuss and resolve it and then go on to the next activity.

Nitin: So you take the step, verify, re-verify and then start the next step?

Joshi: Absolutely. Step one was disengagement of the armour that was in proximity and that has happened very smoothly. Steps 2 and 3 are disengagement from the north and south banks. Step 4 is the final disengagement which will happen from Rezang La and Rechin La complex (the RR Complex). Important thing is that it was decided that once this phase of the disengagement process gets over, within 48 hours we will have the 10th Corps Commanders flag meeting where we’ll discuss resolution of other friction areas.

Nitin: Is this the first time that the agreement is written down?

Lt Gen Joshi: Yes, it is written down and agreed by both sides and once it was ratified by the higher quarters, then the process started.

Nitin: In the 6-7 days the process has started, how has this been done? The written agreement talks about restoring landforms, what does that mean?

Lt Gen Joshi: In some areas on the north bank, the PLA had occupied right up to Finger-4 and from Finger-4 to Finger-8 the had made a lot of infrastructure, dugouts; tents and sangars had come up in large numbers. In the agreement, it is said that the entire landform from F4 to F8 will be restored to (what it was in) April 2020.

Nitin: That is a bone of contention as that’s where the main dispute lies. According to the agreement, the Chinese will go back to east of Finger 8 and India will go back to Finger 3 and neither side will patrol these areas. Some critics have said India has lost the right of going up to Finger 8, where we used to go. What you have to say about that?

Lt Gen Joshi: That is a misinterpretation of the agreement. We’ve to look at this in the manner that our claim line is till Finger 8. The PLA is going behind the Finger 8, behind our claim line. They are restoring the entire landforms from Finger 4 to Finger 8, back to April 2020. They will not carry out any activity on our side of F-8, i.e. our claimed areas. It’s a huge success, how are we ceding? Their claim is till F-4 but they are not doing any activity, whether it is military or otherwise, in areas claimed by us. It’s a huge success.

Nitin: A former diplomat said this the best agreement one can expect after all they’ve done. Let us move to the south bank. Your action on 29-30th August last year gave us an equal footing in the negotiations?

Lt Gen Joshi: Absolutely. That action finally turned the tables on the PLA and got them back to the negotiating table. Before August 29-30, we already had five Corps Commander-level meetings. We were on the back foot. We had occupied certain areas of the north bank but the Chinese were in some dominating locations. But on 29-30th of August, we occupied the Rezang La and Rechin La complex, the most dominating features overlooking China’s Moldo garrison. We occupied the south bank and higher heights of F-4, dominating all the locations that the PLA occupied. China was brought back to the negotiating table.

Our operations were well planned and well thought out and executed in a manner to totally surprise the PLA. They never expected that we’d undertake such action. The credit goes to the soldiers on the ground and the zonal leaders who had planned, rehearsed. Since June 15 last year, when the Galwan incident happened, we had been preparing and finally, we executed this to surprise our enemy. We took tanks to Rezang La and Rechin La which was unthinkable a couple of months ago before that. It had never happened before.

Nitin: After occupying those heights, it still took 3-4 more rounds to force China to agree?

Lt Gen Joshi: Yes, it took time but finally they understood that we are looking at status quo ante of April 2020 and we’re not going to budge. They realised that and in the next two to three flag meetings, they continued to look for a face-saver and then relented. Finally, in the ninth round of meeting, an agreement was reached.

Of course, there were a lot of backchannel activities going on—the defence ministers met and spoke, the foreign ministers did the same thing, the NSAs have been talking. Therefore, it was a whole of government approach.

Nitin: How MEA’s representative was drafted into the meetings?

Lt Gen Joshi: It was agreed and the Chinese also had a representative of their boundary affairs. It was a huge advantage.

Nitin: On the South bank, critics say it is India’s loss and disadvantage by vacating Rezang La, Rechin La? Your comment?

Lt Gen Joshi: Rezang La is a dominating feature on the Kailash ranges which we had occupied. But it has been done purposely to push the negotiations to disengagement and that is what happened. It’s not that the advantage is in perpetuity. We can’t equate the occupation of Rezang La, Rechin La and try to resolve the boundary issue with this. It was done with a purpose and disengagement is happening which we’re looking at in the areas in which we’re at a disadvantage in the South bank. We need to restore the status quo ante.

Nitin: What if the Chinese again come and occupy—that is the apprehension?

Lt Gen Joshi: This disengagement agreement is based on the premise that we will not occupy again. Having done this, we have indicated our intentions very clearly to the PLA that we will not allow the unilateral change of the status quo on the LAC. In the agreement, it is there that these areas will not be occupied again. We’ll be vigilant, our force levels are alert.

In 2010, when you came to Ladakh and I was brigade commander here, only two battalions were looking after the entire area but now we have over 90,000 troops in eastern Ladakh.

Nitin: What are the other friction points?

Lt Gen Joshi: Other friction points are Depsang, Patrolling Points PP-15, PP-17A and the Demchok area. Once we agreed to this disengagement, it was also agreed that the day this process finishes, within 48 hours we will have another meeting of the Corps Commanders, discuss other areas and resolve them.

Nitin: Depsang is an old issue, what is the issue there?

Lt Gen Joshi: One has to understand that Depsang is not related to this present imbroglio. It is a legacy issue. When I was brigade commander here, it was a flashpoint as well. It is the area where the areas of differing perceptions are maximum. It predates the present situation. Since it is a large area, patrols from both sides face off. This is the prevailing situation. The situation is not volatile there and it has to be resolved at some point and I’m sure it will get resolved.

Nitin: What is the connection it has with the so-called 1959 claim line?

Nitin: The other points—Gogra, Hot Springs—what are the issues there?

Lt Gen Joshi: This is the area where the initial face-offs happened. The troops there were in contact but in those areas also we want the troops to go back to its respective posts. That will not take much time. It will get resolved at the earliest.

Nitin: What are the lessons of Operation Snow Leopard?

Lt Gen Joshi: Operation Snow Leopard is still continuing. We are compiling the lessons but one thing which stands out is we need to renew our focus to our northern borders, in terms of capability development. It involves two things—infrastructure and deterrence. In terms of infrastructure, a lot has been done and happening and we ensure that we have got the requisite infrastructure in place so that the forces can be mobilised in a given time.

About capability development, rebalancing has already been ordered by the Army Headquarters and that will now happen plus some minor tactical lessons which will continue to compile.

Nitin: In terms of tactical lessons, the speed of Indian Army surprised Chinese PLA and the world over. What has changed over these years?

Lt Gen Joshi: A lot has changed. The intent of the PLA which we can discern. Initially, we were surprised when they broke all the agreements and came in large strength but the moment their intent was clear, the entire juggernaut of the Indian armed forces got mobilised and moving. The air force’s C-17 and strategic lift were focused on Ladakh. The Chinooks brought troops to the areas when it was required. We had the BRO working day and night to ensure that both the access links were kept open. We got a lot of local support in Ladakh and we hired local machinery like JCBs, light vehicles etc. The entire system, it was the whole nation approach and we airlifted thousands of tonnes of tanks and APCs and troops. It was a great lesson like I said earlier it renewed focus to the northern borders to give confidence.

Nitin: Final question, what’s the roadmap now in terms of agreements since 1993, they all have been broken. As Army commander what will you like to happen on the LAC?

Lt Gen Joshi: I would like to have clarification on the LAC, that is the end result we are looking at. But given the present situation, once this disengagement happens, we’ll have the flag meetings and we’ll discuss the other frictional areas and resolve those. After that, we need to sit at higher levels, at the diplomatic level, and look at new protocols since the Chinese PLA has broken all earlier protocols. We had multiple agreements signed to have the status quo at the LAC but they all have been broken, so we’ve to look at new protocols. Only then we will have some kind of peace along the LAC.

By: Nitin A. Gokhale