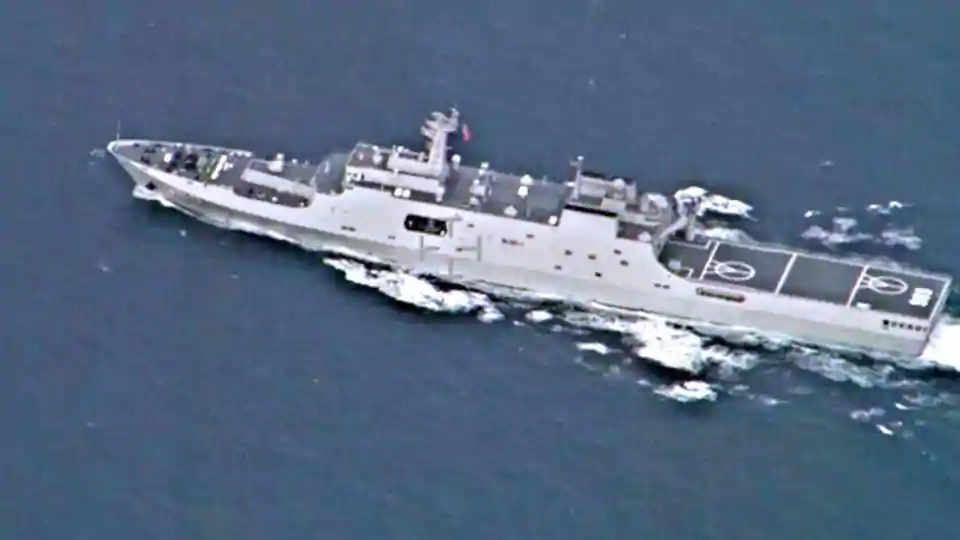 China has launched first of the four most advanced naval warships meant for Pakistan at Chinese state-owned Hudong Zhonghua Shipyard in Shanghai on Sunday, 23 August. The Type 054A/P, a guided missile frigate, is the largest combat ship China has built for any foreign country. Chinese state media reported the acquisition of the warship would double the combat power of the Pakistani Navy’s surface fleet. By 2021, the Pakistan navy is to get three more similar warships for its fleet.

While one can somewhat empathise that Pakistan wants to bolster its land borders with India, the expanding naval inventory is a puzzle. The kind of naval shopping list makes people wonder whether Pakistan expects to dominate the Indian Ocean or usurp territories. Surely, for defending its sea lanes of communication, the procurements seem to be an overkill.

Imran Khan is on a mission to feed his starving population on an opioid of weapon procurements instead of stabilising the economy. The Prime Minister and his military have been blinded with their obsession to equate themselves with India and trying to match it through a military expansion programme. Even a peek into the past few years’ weapon procurements shall leave the common Pakistani seething. Between 2020 and 2024, Pakistanis set to spend an astounding $ 48.5 billion. These are the figures for acquisitions already on the table. There would be more add-ons every year. In fact, Pakistan is already one of the highest spenders on defence in the world in terms of GDP at a stunning 4 per cent – the highest in South Asia. Some of the recent big-ticket military imports either in progress or in the pipeline can be seen in the table below:

The above is only an indicative list of military imports. Incidentally, the funds the military receives from the state budget is in addition to the revenue it generates from its extensive business operations. These include over 50 commercial entities generating some $1.5billion annually. The Pakistan military just recently moved into the mining, oil and gas exploration sector. This too was facilitated by Khan’s government. The ruling dispensation and military establishment are only busy filling the coffers of defence firms across the world – from Russia to Romania and Germany to Turkey.

Turkey indeed has found a scapegoat in Pakistan. Be it new tankers, F-16 and Agosta 90-B submarine upgrades, the Jinnah class corvettes or the T-129 attack helicopters, Turkish defence industry’s saviour is Pakistan. In February this year, the Turkish President RecepTayyipErdoğan during his visit to Pakistan sang eulogies on Pakistan-Turkey relationship. It was enough to snare the Imran Khan administration into getting into some more defence deals. But much of Turkish weaponry and equipment is dependent on components of German, French, Swedish and British origin. If sanctions post incursions into northeastern Syria have hit Turkey hard, the resultant drop in defence exports is a painful sting. Post sanctions, the countries immediately halted supplies to Turkey. Coupled with the souring relations with the USA and other European countries, as also the blossoming Turkey-Russia romance, any support, maintenance and repairs to the Turkish equipment with Pakistan is questionable.

Instead of focussing on the drifting economy, Imran Khan and the military have plunged the country into a military platforms import addiction. Inflation in Pakistan today is at a 10-year high of 13 per cent. The cost of food in Naya Pakistan went up by 19.3 per cent in January 2020 as compared to the same period last year. The price of milk last year had crossed that of Petrol and Diesel. One wonders, if Islamabad intends to serve Petrol and Diesel as a substitute for milk and all the fancy imported military gadgetry as the main course to an already struggling population. Indeed, it appears, bullets, not bread is the flavour of Naya Pakistan even though the economy spirals downwards and a bleak future awaits its next generation.