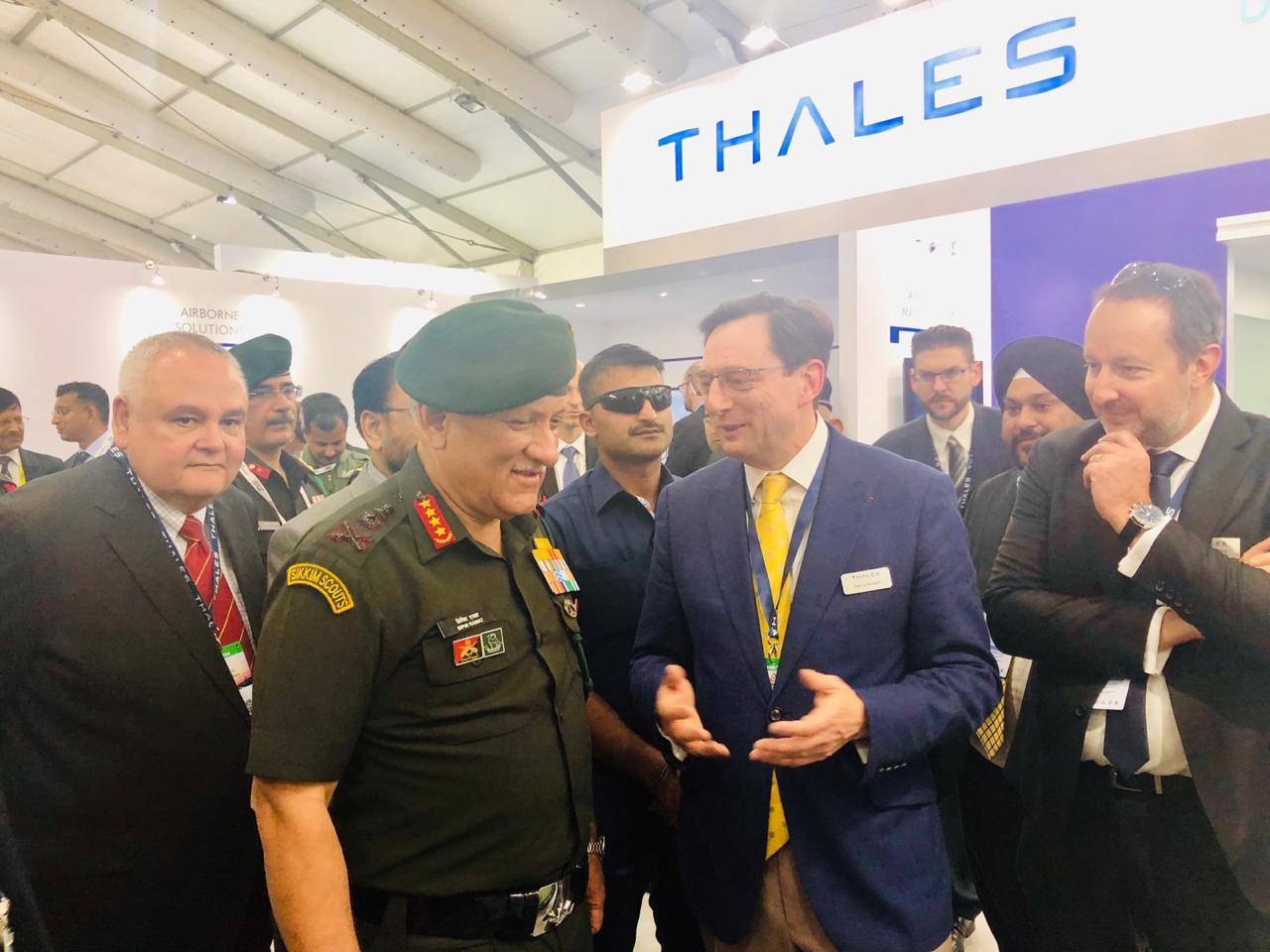 Thales has a decades long association with the Indian Defence Industry. It has provided a large inventory of equipment to the Indian armed forces. The company plans to open an Engineering Competence Centre at Bengaluru. Thales is also be participant in the Indian Air Force’s Mirage 2000 programme.

through its supply chain partnerships with the local industry

Brig S K Chatterji (Retd) (SKC): Tell us about Thales’ innovative solutions and its endeavors in supporting the modernisation of Indian armed forces.

Emmanuel de Roquefeuil (ER) : Present in India since 1953, Thales has been a reliable partner to the Indian armed forces and is supporting its modernization efforts. Under the government’s ‘Make in India’ policy, the Indian defence and aerospace sector is taking right strides towards becoming a global manufacturing hub. This has opened several new avenues for OEMs like Thales to explore business opportunities and form new relationships with our local partners in India.

As a global technology leader, Thales’ strong innovation capabilities prepare its customers to achieve their big ambitions and master every decisive moment. The company has been on the cutting edge of connectivity and a driving force in the digitalisation of the defence, aerospace and space markets among others. Since 2014, Thales has invested almost €7 billion in digital technologies (AI, Big Data, Cyber Security & IoT), including the under process acquisition of Gemalto.

As India’s digital ecosystem is rapidly developing, there is a huge potential for organisations like Thales to support the needs of the Indian Air Force, Army and Navy with their solutions coupled with key digital technologies.

SKC: What is the purpose of Engineering Competence Centre that you are going to open in Bengaluru?

ER: The new Engineering Competence Centre will expand our footprint and cement our long-standing relationship with India. It will be a first-of-its kind engineering centre in India that will focus on software and hardware capabilities in the areas of civil as well as defence businesses, serving Thales’ global needs. We seek to hire over 2000 engineers in the next three to five years for this Engineering Centre.

SKC: Tell us about Thales equipment being installed on upgraded Mirage 2000 aircraft for the IAF?

ER: The Indian Air Force (IAF) has been integral in safeguarding the country’s sovereignty and securing the Indian airspace, along with other branches of the Indian armed forces. Thales has been committed to supporting them in mastering every decisive moment.

In July 2011, Thales and Dassault Aviation signed a contract for the upgrade of the IAF’s Mirage 2000 fleet, which will enhance its technical-operational capabilities. As a result, the IAF will have a coherent platform-system combination for the next 20 years. The IAF’s air potential will be further enhanced by the integration of new capabilities. These include longer-range detection across the entire spectrum, improved tactical situation awareness, longer-range weapon firing against multiple simultaneous targets, weapon stealth and an extended operating envelope with the capability to engage ground targets whilst countering airborne threats.

SKC: What are the existing partnerships and JVs that Thales has in India?

ER: Thales strategy of developing its industrial footprint in India is in line with the Indian government’s policy of ‘Make in India’ and of developing the defence base of the country. We have been co-operating with the Indian private sector, particularly large corporate players and SMEs, to build transfer of technology and supply chain partnerships in the fields of complex electronics, wired mechanical structures, optronics, complex hardware and software engineering.

We have been working closely with Hindustan Aeronautics Limited (HAL) for over 50 years and have been providing high-end avionics to equip the platforms that HAL is designing.

We also have a strong working relationship with Bharat Electronics Limited (BEL) with whom we have formed a joint venture (JV) BEL-Thales Systems Limited (BTSL) dedicated to civilian and select ground-based military radars. With BTSL, Thales is jointly developing the PHAROS fire control radar for gun and missile systems that will cater to both domestic Indian and international markets. BTSL will also be undertaking the production of the LBREC – Low Band Receiver of the self-protection suite of the Rafale.

Thales also has JVs with Samtel and L&T Technology Services in the fields of military avionics and airborne sensor systems, and avionics software respectively.

Besides these, Thales and Bharat Dynamics Ltd. (BDL), a Government of India enterprise, signed an MoU in February 2017 to assess the opportunity for the transfer of technology of the STARStreak missile capability to India with the support of the Government of the United Kingdom. In 2018, MKU Limited and Thales signed MoU for strategic co-operation in the development and production of optronic devices.

SKC: What are the futuristic defence technologies that Thales is working on?

ER: From robotics to drones and adoption of artificial intelligence (AI) in defence equipment, there are multiple areas of strong innovation in the defence industry. Thales meets its clients’ ambitions through its expertise in four main technologies of the digital revolution. These digital technologies include ‘Connectivity’, ‘Big Data’, ‘Cybersecurity’ and ‘Artificial Intelligence’. It is injecting these disruptive technologies into its solutions across its major markets including defence.

Today, connectivity and connected objects, Big Data, and Artificial Intelligence make for fantastic innovation accelerators, so long as these technologies are developed in a highly secure way. They are at the centre of digital transformation and make Thales a major player in this domain.

SKC: What are the key technologies and products that Thales will be showcasing at Aero India 2019?

ER: At Aero India this year, Thales will showcase its solutions developed in India through its supply chain partnerships with the local industry – supporting the ‘Make in India’ initiative of the government. It will also present the latest advancements in its capabilities that seek to serve the interests of the Indian Air Force and also Ministry of Civil Aviation. Thales stand AB 2.21 will bring alive a range of solutions across aero civil and defence domains through special immersive digital experiences. Some of the demos at the stand will include optronic pod TALIOS, latest generation mini-UAS Spy’Ranger, high velocity missile STARStreak, rockets and a range of radio communication products, among others.

SKC: What are your expectations from the show?

ER : With the success of its past editions, Aero India has carved a niche for itself globally as a premier aerospace exhibition. We look forward to participating in this mega event and showcasing our cutting-edge solutions to the Indian customers and building new relationships with our stakeholders and industry at large. Thales, together with its local partners, is keen to address the modernisation plans of the Indian armed forces with its cutting-edge technologies. It also steps forward in its aim of expanding its industrial footprint in the country with the upcoming engineering competence centre in Bengaluru and seeks to showcase the same at the Aero Skills Pavillion too.

SKC: Thank you for talking to BharatShakti.in.