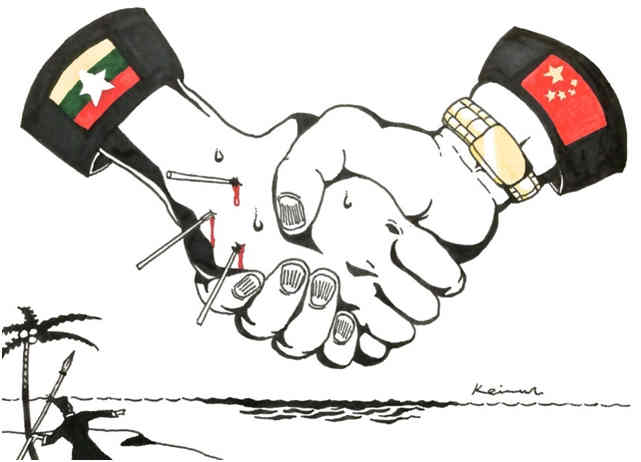 On 17 January 2020, President Xi Jinping visited Myanmar. The visit led to 33 bilateral agreements being signed to unleash the Chinese Communist Party’s (CCP’s) soft power which is not in the best interests of Myanmar. Nonetheless, in an attempt to question CCP’s role in aiding crimes against humanity, Commander-in-Chief of Myanmar Armed Forces, Senior General Min AungHlaing (MAH) probed Party President Xi on the role of CCP in assisting the large number Ethnic Armed Organisations (EAOs) operating in Myanmar.

In November 2019, the Tatmadaw (official name of Armed Forces of Myanmar) seized a large cache of weapons which included a Chinese made FN-6 from the Ta’ang National Liberation Army. The Tatmadaw has also been increasingly frustrated with the availability of Chinese made weapons with the Arakan Army (which has been declared as a terrorist organisation by the Government of Myanmar). This was also voiced by MAH during his recent visit to Russia where he stated that terrorist organisations active in Myanmar are backed by ‘strong forces’; albeit the CCP. This indicates that top Tatmadaw military brass has blamed CCP’s attempts to take advantage of the fragile internal situation and undermine the sovereignty of Myanmar.

Notwithstanding bilateral setbacks in 1967 and 1973, China-Myanmar relations (termed as “PaukPhaw‘ or fraternal) have been on the upswing since 1988.  After the infamous ‘8888’pro-democracy uprisings, Myanmar was relegated to being a pariah by the West, and the CCP had swiftly moved in to fill the void. Over the years, as the West shunned Myanmar, the CCP became Myanmar’s key political, military, economic and diplomatic partner and began exerting disproportionate pressure and influence on Myanmar.

Today, China is important to Myanmar for several reasons. Economically, China is Myanmar’s largest trading partner and largest source of FDI. Diplomatically, the CCP uses its UNSC veto as a shield for Myanmar. Politically, the CCP has not only engaged extensively with both the ruling NLD party and the Tatmadaw but has also exercised its influence on EAOs in negotiating the peace process. In effect, the CCP with its “double game” continues to exploit Myanmar’s resources by accentuating its vulnerabilities.

The original cost of developing KyaukPhyu SEZ (which is a part of China-Myanmar Economic Corridor or CMEC) was $ 7.2 Billion. This cost was slashed to $ 1.3 billion by Myanmar over concerns of excessive debt. Whilst the environmental/ social impact assessment for the project is yet to begin, concerns have already erupted in the local populace. Though these concerns may seem premature, given Myanmar’s previous experience with other Chinese projects such as the LetpadaungCopper Mine (where Chinese operators blatantly resorted to land grabbing/ unauthorised evictions) and Myitsone Dam project (where construction had to be stopped in September 2011 due to environmental issues), these concerns are increasingly influencing Myanmar’s decision making. Today Mayanmar’s leadership is worried about the tell-tale signs of the “Dragon’s trap“.

Another shocking fact of CMEC is that it passes through the most troubled areas in Myanmar where EAOs have waged armed conflict for decades against Myanmar’s government. The KyaukPhyu SEZ (Rakhine state) is where the Arakan Army is active and the other end of CMEC is in the Northern Shan State where armed conflict has been raging. It is unclear how such large financial investments in these sensitive areas would assist in ending the armed conflicts. The converse is more likely to be the state. The CCP is infamous for closed-door negotiations and would resort to illegally paying the EAOs to progress the CMEC. Such payments will further empower the EAOs, and in turn, strangulate Myanmar’s peace process.

More recently, the Government of Myanmar has ordered a probe into the contentious Chinese development of ShweKokko in Karen State by illegal land confiscation/ construction, and the influx of CCP’s money for illicit activities. Be it the CMEC, Letpadaung Mine, Myitsone or Shwe Koko; in fact in all Chinese aided projects, total disregard of rules and insensitivity to local sentiments is a measure of the coercive approach of the CCP in exploiting Myanmar.

Anti-CCP sentiment in Myanmar is not only fuelled by large state-run projects such as CMEC but also smaller projects such as private infrastructure development, small-scale mining operations and agriculture – plantations, where exploitation of local population is rampant. Allured by cheap labour, land, lack of transparency and ineffective labour laws, CCP-backed Chinese private companies are investing heavily in plantations bearing cash crops in Myanmar. These plantations are often unregulated and the investors take the assistance of EAOs, thereby exploiting the locals and natural resources of Myanmar for CCP.

The emergence of COVID-19, limited transparency in CCP’s economic dealings and lack of concern for national sentiments, coupled with exploitation of natural resources have resulted in deep distrust and anxiety among the people of Myanmar against the Chinese. The hardened Western stance and increasing investment by CCP, push Myanmar further into the Chinese orbit, eventually paving the way to being shackled by the tentacles of the Dragon’s debt trap and becoming a client state.