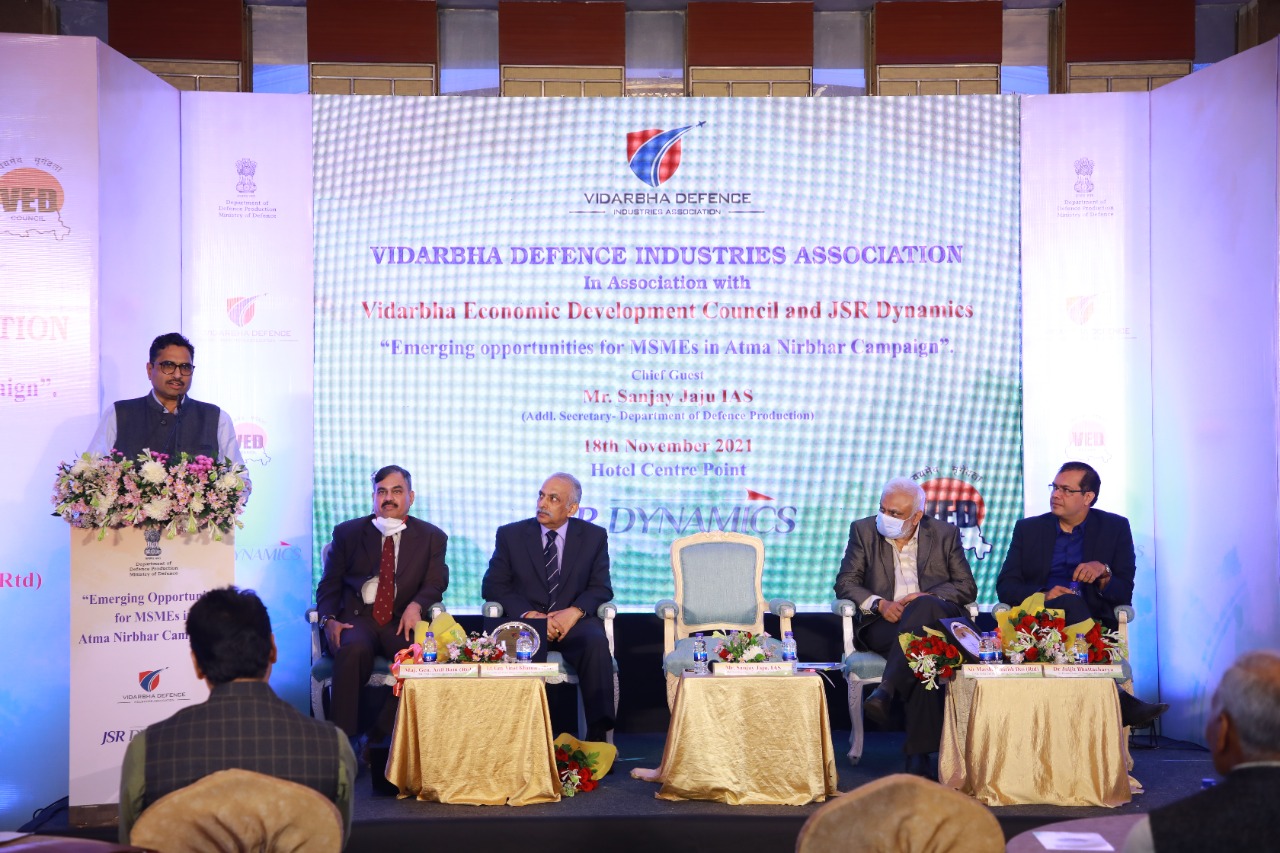 Post a brief address by Mr Dushyant Deshpande, Director VDIA, the Opening Session was set in motion with a talk delivered by Air Marshal Shirish Deo (Retd). He has, post retirement, become an entrepreneur and is into manufacturing product lines tailored for the armed forces. He shared his experiences with the audience, some of whom were either from MSMEs in the Defence Sector or planning to make an entry, soon. Lt Gen VG Khandare apprised the gathering of Atmanirbharta as a national priority for the country. The opening session also included an address by Jaijit Bhattacharya President Centre for Digital Economy Policy Research.

Sanjay Jaju gave an illuminating address covering all aspects of the Defence Industry and especially the MSMEs. He apprised the gathering about measures undertaken by the government to ease business in the defence sector, the spectacular rise in exports, and our targets in the years ahead. His talk dwelt on the need for pursuing self-reliance in defence, and policies enacted to boost the defence sector. He also offered his frank advice to MSMEs desirous of foraying into the Defence Sector.

VDIA is a non-profit organisation raised in 2017 to promote Defense and Aerospace Sectors and bring in required competencies in the Vidarbha Region. The Founding Chairman of the hub was Lt Gen Ravindra Thodge (Retd) who was MGO of the Indian Army and Consultant to MOD for Defense Indigenization. Currently, Maj Gen Anil Bam is the Chairman Designate of VDIA. The organisation endeavours to bring Vidarbha Region on the global map, especially in the verticals of Aviation, Aerospace, Ammunition and Automotive.

The seminar was also addressed by a host of Industry Captains of Vidarbha region. The speakers shared their experiences with the audience that was mostly composed of entrepreneurs in the Defence Sector. Among other speakers were AN Srivastava, Dir Operations of Yantra India and SK Bhola of Munitions India Ltd. Rahul Pande State Information Commissioner also interacted with the attendees. Editor, Bharatshakti.in gave a talk on ‘Unfolding of Make in India and Atmanirbhar Bharat.

With a huge economic boost having been given to the economy by the Government with a Rs. 20 lakh package that the Prime Minister had announced last year, opportunities in the Defence Sector have also expanded greatly. Further, with the situation along our borders with Tibet remaining fragile, a higher degree of defence preparedness is called for.  With indigenisation of defence production being a national priority, and measures like earmarking 64 per cent of the defence modernisation budget for domestic procurement, an astounding push has been given to the Indian Defence Sector.

The VDIA is at the centre of endeavours to raise the region’s role in the Defence and Aerospace Sector. Vidarbha is also witnessing an expansion in its role as an MRO hub for the Aviation and Defence Sectors. Skill development is one of VDIA’s top priorities as explained to me by Dushyant Deshpande, Director, VDIA. The other priorities include the automotive and Explosives sectors. With the Solar Group, one the biggest Indian companies in the Explosives Sector being located in the region, VDIA has definitely chosen its priorities judiciously. Satyanaryan Nuwal, Chairman Solar Group is the Patron of VDIA and was present for the seminar.

In the years ahead, VDIA plans to open an Innovation Hub and a Flying Academy. VDIA has definitely grown its roots deep and has flourished remarkably, given the constraints imposed by the COVID 19 pandemic. The region seems poised to carve out a major role for itself in the Indian industry map.

Maj Gen Anil Bam delivered the Closing Remarks by reemphasising the objectives of VDIA and the singular aim of attaining these in the shortest possible timeframe.