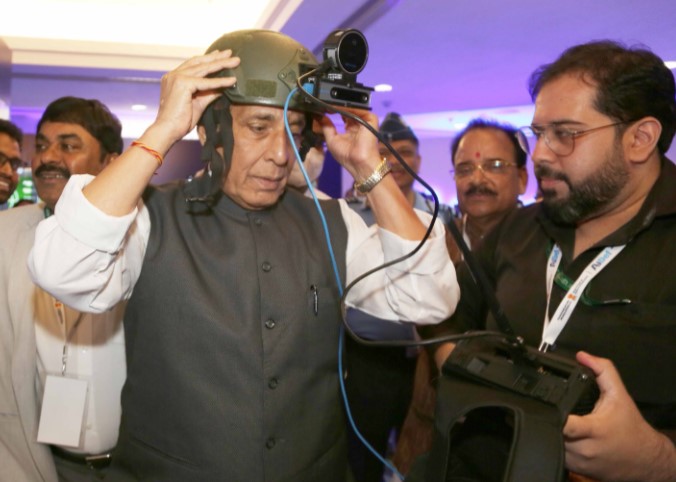 Defence Minister Rajnath Singh launched 75 newly developed military products and technologies powered by artificial intelligence at the first-ever ‘Artificial Intelligence in Defence’ (AIDef) symposium and exhibition organised by the Department of Defence Production, Ministry of Defence (MoD) on Monday. The event featured an exhibition to showcase the cutting-edge AI-enabled solutions developed by the Armed Forces, research organisations, start-ups, and innovators.

India is taking steps to harness the huge potential of artificial intelligence (AI) in developing futuristic weapon systems as well as in other sectors, informed Rajnath Singh during the event and added “we have started incorporation of AI applications in remotely piloted unmanned aerial vehicles etc. there is a need to move further in this direction so that we can develop autonomous weapon systems the need to be ready”.

The Minister emphasized that the “timely infusion of technologies like AI and Big Data in the defence sector is of utmost importance, so that we are not left behind the technological curve and are able to take maximum advantage of technology for our services”.

Addressing the symposium, Singh spoke of making India a global hub for artificial intelligence and hoped that the products would open up new business opportunities as they have dual-use applications. “Russia is a technologically advanced country and is continuously progressing in the field of Science & Technology. On AI, Russian President Mr Vladimir Putin had said ‘Whoever becomes the leader in this sphere will become the ruler of the world’. Although India believes in the principle of ‘Vasudhaiva Kutumbakam’ (the whole world is one family) and has no intention to rule the world, we must develop the capability of our AI technology so that no country can even think of ruling us,” said Defence Minister.

He noted that AI’s ethics and dangers must be properly thought out. “We cannot stop the progress of artificial intelligence and we should not try to stop its progress. But we need to be careful about it,” he mentioned. When a new technology brings a huge change, its transition period is also as huge and serious, he said. “Since AI is a technology that can bring about a massive change, we must be ready to face the legal, ethical, political, and economic upheaval that may follow,” he observed. “We need to work on AI extremely carefully so that this technology does not go out of our control in the coming times,” he added.

Singh also said that the country should ensure democratic use of the technology. The defence sector is undergoing important changes due to AI. The training of soldiers is also being improved with the help of AI, he mentioned.

Among the AI-enabled products launched by the Minister were autonomous weapon systems, surveillance and reconnaissance systems, robotic products, human behavioural analysis software and a range of simulators and testing equipment. Some products like AI-enabled voice transcription software, driver fatigue monitoring system and evaluation of welding defects are expected to have applications in the civil world as well.