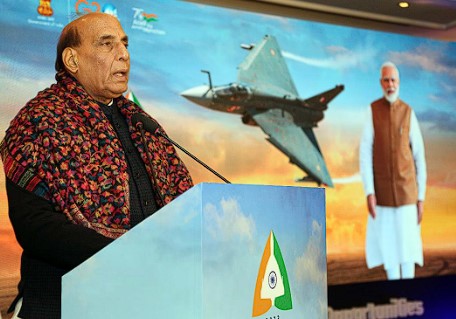 Defence Minister Rajnath Singh convened the Ambassadors’ Roundtable conference on Monday in New Delhi to extend invitations for the forthcoming Aero India 2023. He invited representatives from around the world to attend Asia’s largest and 14th Aero show scheduled in Bengaluru between 13 to 17 February. He urged them to encourage their respective defence and aerospace companies to attend the global event.

Rajnath Singh described Aero India as a premier global aviation trade fair, which provides an opportunity for the Indian aviation-defence industry, including the aerospace industry, to showcase its products, technologies and solutions to the national decision-makers.

Addressing the foreign delegates, he hoped to surpass the benchmark set in the previous edition with a larger presence of exhibitors and representatives of friendly countries in the forthcoming aero show. Underlining India’s growing defence manufacturing capabilities, Singh said the self-reliance initiative is beginning a new partnership paradigm with India’s partner countries.

He added that a robust defence manufacturing ecosystem has been created, leading to India’s emergence as a leading defence exporter in recent years. The defence exports have grown eight times in the last five years, and now India exports to over 75 countries. Stressing that the Indian aerospace and defence manufacturing sector is well prepared to take up future challenges and capitalise on emerging opportunities, He highlighted that India has domestically produced Light Combat Aircraft, and the manufacturing of Light Utility Helicopter has also commenced.

“Partnerships are being made with global defence industry giants,” he added, citing the contract India signed for manufacturing C-295 aircraft for the Indian Air Force, through collaboration between Tata Advanced Systems Limited and Airbus Defence and Space SA, Spain.

Emphasising that Make-in-India encompasses make-for-the-world, he told the ambassadors that “partnerships” and “joint efforts” are the two keywords that differentiate India’s defence partnership with other nations.

“When we are procuring defence equipment from our partner nations, very often, they are sharing the technical know-how, setting up manufacturing plants in India, and working with our local firms for various sub-systems. And when we are exporting our defence equipment to our friendly nations, we offer our full support towards the capability development of the buyer through sharing of technology, training and co-production,” he explained.

“We wish to create symbiotic relationships where we can learn from each other, grow together and create a win-win situation for all,” Rajnath said. He also said he envisages the G20 Presidency as an occasion to showcase the three D’s of India – development, democracy and diversity.