The Chinese Navy is growing in strength. Currently the 2nd largest in the world, it also has plans of rapid growth. Though, as yet not too formidable in terms of its aircraft carriers, it has a large submarine force of mixed vintage. Chinese are also developing bases in Gwadar and Djibouti where they would be stationing marines. It has already developed the Hambantota Port in Sri Lanka and upgraded ports in South Asian countries.

The author provides an incisive view of the Chinese Aircraft Carrier and Submarine strength and carries out a threat evaluation from the Indian perspective. 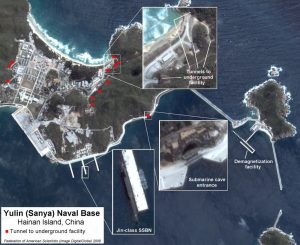 In December 2016 China’s first aircraft carrier Liaoning conducted its first seagoing voyage, travelling from China’s Northern coast to the Southern coast. It left its homeport at Qingdao in Northern China and took a politically charged route through Japan’s Ryuku Island chain and the East China Sea. From there it passed through the South China Sea nearing Taiwan and the Philippines and finally berthed at Sanya Naval Base on Hainan Island. Chinese nuclear submarines have been observed at various parts of the Indian Ocean causing consternation to South Asian countries.

As on date there are 37 aircraft carriers in the world with 12 navies. It would be pertinent to observe that the United States has 10 nuclear powered fleet carriers. In addition the United States has nine amphibious assault ships which can carry either helicopters or about 20 vertical or short take off and landing (V/STOL) fighter jets and are similar in size to light fleet carriers.

Aircraft carriers operate with a Carrier Battle Group providing an offensive role to a Navy. A former Chief of the Royal Navy, Admiral Mark Stanhope, has said, “To put it simply, countries that aspire to strategic international influence have aircraft carriers”.

Submarines are significant operational assets of any Navy. Their strength lies in remaining undetected and their ability to launch weapons at targets under water. Nuclear powered submarines with nuclear weapons form strategic portion of the Triad and have tremendous capabilities. Often, submarines have surprised various adversaries by their stealth and firepower capabilities.

China and India have focussed on their aircraft carriers and submarines. It would be of interest to note their inventories and employment in the India Pacific region.

The PLAN had a great Commander-in- Chief General Liu Huaqing. The first plan of Chinese aircraft carrier development dated back to 31 March 1987. He also enunciated the first, second and third island chain for enhancing the power projection of PLAN. In these plans were procurement of aircraft carriers and submarines. The first aircraft carrier was built from a Soviet aircraft carrier Varyag (Kuznetsov class). The ship became the property of Ukraine after the breakup of the Soviet Union and was sold to a private company in Macau in 1998. In 2000, it was towed and reached Chinese waters in 2002. The Chinese Government acquired the ship in 2005 and was moved to a dry dock in Dalian.

In June 2011, General Chen Bingde made the first public acknowledgement of the ship’s refit. On 27 July 2011, the Chinese Defence Ministry announced it was refitting the vessel for scientific research, experiment and training. The ship undertook its first sea trials from 10 to 15 August 2011. There were nine sea trials undertaken, the last one was a 25 days trial in July 2012. The carrier was equipped with the J 15 aircraft and KJ 88, YJ 83 K and YJ 91 missiles. The ship was handed over to the PLAN on 23 September 2012.

The Chinese have been exercising the ship in the Western Pacific and is currently not allotted to any operational fleet. Currently it is reported to carry 24 J 15 fighter jets, six Changhe Z 18 F anti submarine warfare helicopters, four Changhe Z 18 J airborne early warning helicopters and two Harbin Z 9 C rescue helicopters. As per reports the J 15 aircraft would have below normal range and armament due to limits imposed by the ski jump take off system. Thus Liaoning is an aircraft carrier with limited capabilities.

While Liaoning was being constructed the Chinese planned on building more aircraft carriers. The original plan was to be progressed in stages with basic research, development of the platform and aircraft. To prepare the Captains needed for the future aircraft carriers at the Guangzhou Naval Academy necessary steps were taken. The plan was initially difficult to implement but gradually the hurdles were cleared. It was around the middle of 2007 that Chinese domestic sources revealed inputs regarding purchase of four sets of aircraft carrier landing systems from Russia and this was confirmed by the Russian Original Equipment Manufacturers. 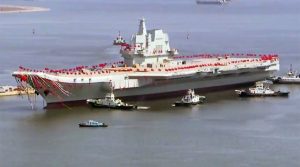 Essentially two more aircraft carriers are under construction in China. The Type 001A is essentially a conventional powered ski jump carrier with a displacement of around 50000 tons. It is likely to be powered by oil fired boilers and steam turbines. There would be some minor differences with Liaoning. The second aircraft carrier would be the Chinese designed aircraft carrier known as Type 002 which would be of a different design and would have a displacement of around 70000 tons. In media reports stated that both an Electro Magnetic Aircraft Launch (EMALS) and a steam-powered catapult were constructed at the Huangdicun naval base for testing.

The Type 001 A is expected by 2020 and the type 002 by 2023. While Type 001 will be built at Dalian, Type 002 will be built by the Jiangnan Shipyard Company Limited. China is also planning for a third aircraft carrier Type 003 which would have a displacement of 110,000tons. This would have the latest launch system. The probable dates of launch are not yet known. Overall, by about 2030 China would have four aircraft carriers capable of undertaking offensive operations in The India Pacific.

The PLAN Submarine Force (PLANSF) comprises all submarines in the North Sea Fleet, East Sea Fleet and South Sea Fleet of the Chinese Navy. Submarines, as on date, are the dominant assault force of the PLAN. Currently there are estimated to be a total of 68 submarines in the PLAN inventory. The classifications of Chinese submarines can be broadly characterised as nuclear powered and conventionally powered submarines. Details are elucidated below:-

· Nuclear Powered Submarines. It is to China’s credit to be the first Asian country to build and successfully commission a nuclear submarine. The first Chinese submarine, Type 091 (Han Class) took 20 years to develop. They are not as effective as the Los Angeles class of US submarines but recently they have operated effectively in the Western Pacific and Japan. Currently, there are three in active service. The next variety is the Type 093 (Shang Class) which has been under development since 1980s and comparable to Russian Victor III class, signifying a significant step forward for Chinese nuclear attack submarines.

· These submarines are capable of attacking US Navy Carrier battle groups and escorting future Ballistic Missile submarines. There are reports of five being in service and possibly another being commissioned.

· The Type 094 (Jin class) include, approximately three operational and eight that may enter service by 2020. The Type 094 is armed with 12 JL 2 ICBMs having a range of 8000 km. The Type 095 (Chinese designation: 09 V) is a proposed class of third generation nuclear powered attack submarine. These are anticipated to have substantially reduced acoustic signature with an improved hull. It is likely that this may act as a potential undersea escort for any future PLAN aircraft carrier task forces. It is believed that one is in service and five are planned. China is constructing a major underground nuclear submarine base near Sanya, Hainan.

· Conventionally powered submarines. Large number of conventional submarines are in service and they form an essential concept of China’s coastal doctrine. The submarines of this class were initially imported from the Soviet Union known as the Whiskey class. These were built in considerable numbers and withdrawn during 1990s. The Romeo class was also imported from the Soviet Union and was produced in China from the 1960s. They were known as Type 033 which were exported and also remained in service till early 2000. 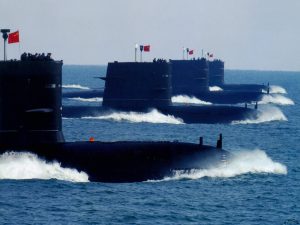 · China built its first indigenous submarine, Type 035 (Ming class) in 1974. The initial hulls did not perform well but 17 are in service with a few having Air Independent Propulsion (AIP). This was followed by the import of the silent Kilo class submarine from Russia with Klub missiles capable of engaging land and sea targets at a distance of 220 km. It is reported that 12 are in active service. China has continued building indigenous submarines despite the Kilo class acquisitions from Russia. The Type 039 submarine (Song class) was indigenously built and underwent sea trials in 1995. It has a German propulsion system, seven blade skewed propeller and noise reduction rubber tiles. They are armed with torpedoes and fire the YJ 8 anti ship missile. There are reportedly 13 submarines in active service.

· The latest Chinese submarine is the Type 039 A (Yuan class). The hull is similar to the Kilo class and other features similar to the Song class with an AIP system. It fires torpedoes and missiles. There are 15 in service and at least three upgraded versions. These are also capable of firing ballistic missiles.

Indian Navy and its capability Vis a Vis the PLAN

What does the PLAN do with its strengthened fleet? The Chinese have already occupied important islands in the South China Sea and built suitable naval bases and airstrips on seven islands which give them an outreach of 600 to 900 nautical miles. Further China’s Yunnan province will be linked to the Bay of Bengal through rail, highway and pipeline. The deep sea port of Kyaukpyu has been prepared by the Chinese to increase their seaward reach on India’s Eastern flank.

To India’s West, the China Pakistan Economic Corridor (CPEC) will create access to the Arabian Sea from Kashgar in Xinjiang to the port of Gwadar. In the Bab el-Mandeb China has set up its first overseas military base at Djibouti. In Sri Lanka, China has built a new port at Hambantota and modernised the port of Colombo. It is reported that PLAN would utilise these ports and have their Marines based at Gwadar and Djibouti. China has also sold submarines to Pakistan and Bangladesh.

Considering all these issues it is pertinent to note that Andaman and Nicobar islands are 1900 nautical miles from the islands of South China Sea and very close to the port of Kyaukpyu in Myanmar. The islands are about 900 nautical miles from Chennai. It is difficult to predict military intentions. Issues like Pearl Harbour, the Chinese attack of India in 1962, the Chinese attack on Vietnam in 1979 and occupation of islands of the South China Sea are examples of unpredicted military events.

The Chinese Navy is gradually breaking out in the Western Pacific and the Indian Ocean. China professes a policy of peace and tranquility which seems credible to Indian politicians, academics, economists and strategists. Chinese news media are often clarifying that the Indian Ocean is not India’s Ocean. Accordingly, is it militarily possible for the Chinese to launch an amphibious attack on critical areas in the Bay of Bengal with their flotilla?

As per naval specialists, in the absence of a National Security Strategy, this is practicable in the short term. India on its part must seriously analyse the effect of Chinese Naval build up in the Indian Ocean and suitably strengthen our Armed Forces to meet this challenge on our island territories.

The Chinese Navy is gradually building its aircraft carriers and currently has 68 submarines. Great nations have great ambitions. The current Chinese forays in the Indian Ocean must be evaluated cautiously to avoid any surprises which may be sprung up on us by an amphibious assault on our island territories.