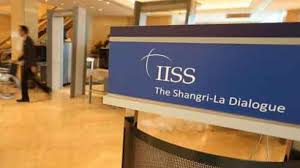 The Asian Security Conference, more popularly known as the Shangri La Dialogue—held every June in Singapore’s Shangri La Hotel—always attracts the attention it deserves because of the high-octane presence of top security practitioners from Asia-Pacific countries and beyond. This year too, it was no different, although India was a notable absentee.

As top ministers, serving and retired military officers, strategic affairs analysts, think-tank heads and foreign policy honchos trooped into the conference from 2 to 4 June, two broad themes dominated the discourse: One, how to deal with North Korea and two, the need to continue with ‘rules-based order in Asia’—in other words, perpetuate long-standing American dominance in the region—in the face of increasing Chinese assertiveness in South China Sea dispute.

Australian Prime Minister Malcolm Turnbull, opening the conference, set the tone for the discussions for the sessions to follow when he remarked, “We should be under no illusions: if we are to maintain the dynamism of our region, then we must preserve the rules-based structure that has enabled it thus far. This means cooperation, not unilateral actions to seize or create territory or militarise disputed areas. This means competing within the framework of international law, not winning through corruption, interference or coercion. However, the economic, political and strategic currents that have carried us for generations are increasingly difficult to navigate.” The reference to China could not have been clearer.

Turnbull’s speech was the cue. Over the next two days, speaker after speaker—from Defence Minister of Japan to her counterpart from France—almost everyone used the term ‘rules-based order,’ and stressed on the need to have freedom of navigation in South China Sea perhaps much to the chagrin of Chinese delegates present in the room in substantial numbers. In fact, the constant reference to the term ‘rules-based order,’ which essentially meant a rebuke to China’s continuing defiance of last year’s ruling by the Permanent Court of Arbitration in The Hague that found China’s nine-dash line claim invalid under international law, provoked a senior PLA officer to point out that China and the ASEAN members were working out their own arrangement in South China Sea. 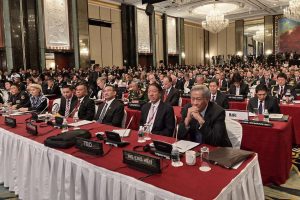 In a pointed reference to Japanese Defence Minister’s speech, Senior Captain Zhang Ye, Head, World Naval Research Office, People’s Liberation Army, said “in your speech you said you are deeply concerned about the situation in South China Sea and you gave us a gloomy picture of the situation in terms of its rules and orders. But I would like to tell another story, because we all know that the situation in this area is much better than it was at this time last year. Last month, the framework of the Code of Conduct (CoC) has been approved by China and ASEAN countries and it is the fruit of the joint effort of China and the ASEAN countries and is also a very important step towards the development of the rule and order in this region.”

As expected, the South China Sea situation apart, North Korea and its belligerence was the central point of discussions. US Secretary of Defence James Mattis did not make any bones about what his country felt. “The United States regards the threat from North Korea as a clear and present danger,” he stated up front and sought a commitment from China to rein in the North Korean regime. “We believe China will come to recognise North Korea as a strategic liability, not an asset – a liability inciting increased disharmony and causing peace-loving populations in the region to increase defence spending,” Mattis stated.

Mattis’ speech which also sought to reassure the world that US will continue to be as engaged in Asia was however greeted with scepticism around the room, coming as it did on the back of the Trump Administration’s announcement shortly before the Singapore event that it was withdrawing from the Paris Climate accord. 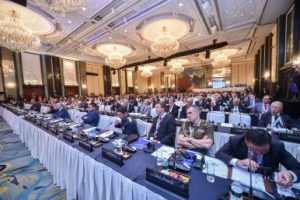 While the US and China had, as usual, the most dominant presence, India’s absence was a much-discussed point on the sidelines of the summit. New Delhi had decided to pull out the official delegation at the last moment since the organisers—the Singapore government and British think-tank, the International Institute of Strategic Studies (IISS)—offered a ‘less significant’ speaking slot to India’s Minister of State (MoS) for Defence Dr. Subhash Bhamre, who was to stand in for Defence Minister Arun Jaitley, unable to make it to Singapore because of his preoccupation with the Finance Ministry. India also objected to Dr Bhamre being ranked lower than the chairman of Pakistan’s Joint Chiefs of Staff, Gen Zubair Mahmood Hayat. 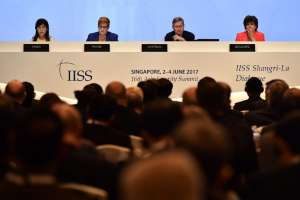 Despite no official presence except its High Commissioner to Singapore, Javed Ashraf, India found mention as important player in the region in the speeches delivered by different ministers at the summit. Mattis in fact quoted Prime Minister Narendra Modi. “As Prime Minister Modi of India has stated so clearly, respecting freedom of navigation and adhering to international norms are essential for peace and economic growth in the interlinked geography of the Indo-Pacific,” Mattis said rather unexpectedly in his speech. The lesson is: India must attend the conference if only to project its own viewpoint forcefully.

Overall, the conference managed to flag most security concerns plaguing the region. No concrete solutions were found of course but then such gatherings are perhaps meant to provide an occasion to discuss and deliberate but not find solutions.