The author, an ex Chief of Air Staff provides a rather passionate account of the Kashmir Valley of old and goes on to assess the situation prevailing now. He opts for Governor’s rule being the correct administrative model in the current situation. The Air Chief Marshal defines a new command and control structure, delves into the resources that would be required and the methodology to be adopted to restore J&K to its old pristine glory. 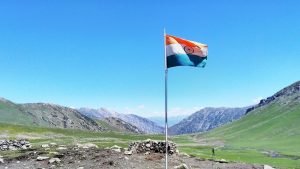 Amir Khusrau the great poet coined this beautiful couplet a couple of centuries back. A few centuries later in 1998, I was Air Officer Commanding Srinagar. Thanks to the then Air Chief acceding to my request, we had got the Surya Kiran Aerobatic Team to perform over Srinagar. A crystalline morning with a trace of cirrus was there to provide the backdrop; the venue beingDal lake. The CM had invited us over at Shalimar for watching the display with a full scale Kashmiri breakfast as added incentive. The Surya Kirans pulled off a fabulous display , as usual. The tricolour lingering in the skies after the Bomb Burst filled one’s chest with pride. The CM asked me,”Isko kya kahen AOC saab?” I ad libbed, “Sir, Indian tricolour over the skies of Srinagar for the first time…?” He said,” No! no! no! no! The tricolour has always been in our hearts. Nothing new.”

Suitably chastened, I concentrated on the bakarkhani roti and rogan josh. A few hours later, on TV, I suddenly found the CM grabbing headlines with one of the most patriotic quotes of all times. “What can I say? The Indian tricolour over the skies of Srinagar…”

I have been familiar with the Valley since the mid 70s when I went for Jungle & Snow Survival course there. How lovely the Valley was ! Mother Nature at her most picturesque; some of the most beautiful picnic spots; the best flowers and fruits and, of course, unsurpassed female beauty. The people were friendly and laid back. But, even then, they thought of India as a foreign country, in a benign sort of a way. Suddenly in 1989-90 the situation changed dramatically and kept going from bad to worse. Aided and abetted by Pakistani ISI, Wahabi terrorism had encroached into the Valley. Many people and Governments mistook the attacks and the violence and the bandhs as an ‘Azadi Movement’.

Bit by bit, after witnessing the demographic shift and ethnic cleansing of Pundits, we realised that the whole game was of Islamisation and had nothing to do with Azadi, except in the initial stages.

At present the whole nation is wondering what the Government is going to do to resolve the Kashmir issue. Today, even a common citizen blames the people concerned about Article 370. About taking the Kashmir issue to the UN. About returning the hard won Haji Pir pass. About going soft on the Separatists and about releasing Kashmiri terrorists from jails.

I would like to say that it is very easy to be wise after the event. Retrospective criticism is, in fact, the hobby of a large section of intelligentsia residing in and around Lutyen’s Delhi. One needs to put oneself in those times, in that environment. One needs to sense what the pressures were there under which such decisions were taken. Identify the mistakes, by all means, but now think of solutions rather than recriminations and move forward. This article is not entirely about solving the Kashmir imbroglio. It is also about how better to use the medium of air and space to contribute to a solution.

The Kashmir Valley is, paradoxically, designed for peace. The land is extremely fertile, thanks to the silt which Jhelum deposits regularly. No one is abysmally poor. You will not find a Kashmiri without a roof over his head. Peaceful tourist trade thrives and traditional businesses of shikaras, carpets, silver jewellery and Walnut woodwork flourish.

Other than these areas, there are no jobs. Thanks to article 370 no one is keen to establish industries in the Valley. The Indian Govt has been subsidising J&K since 1947. The Abdullahs and their ilk ensured that the aid never reached the intended recipients. There was very poor governance. This, along with advent of Wahabi Islam and, of course, the Paki ISI fuelled people’s anger. The culmination was the killing of Burhan Wani and the pent up anger and violence exploded landing us in the present situation.

Were it up to me to seek a solution to the Kashmir problem I would go about it like so :- 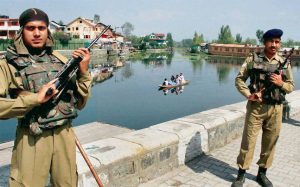 · Ensure the situation meets all requirements to impose Governor’s Rule. Once it is imposed it must remain in vogue for at least six months. In fact, it must be made abundantly clear to all stake holders that Governor’s Rule will remain for as long as required, until the situation is deemed normal and free elections can be held with active participation from all. In fact we had Governor’s Rule for almost six years in the 90s when the situation was really bad. During the Governor’s rule, isolate the separatist leaders like Geelani and jail them outside J&K. Ostensibly, for their own safety. Give the Armed Forces full freedom to operate under full AFSPA protection. The Military must be cautioned that any abuse of these powers would invite swift justice. On the other hand, the public also must be cautioned about anti national and anti – constitutional activities. These must invite strict action.

· As of last count there are about 200 to 250 terrorists operating in the Valley. Use the Special Forces with a clear mandate to seek and destroy. This would only be possible if Army re-establishes the intelligence framework with locals. A few months of Governor’s Rule should facilitate this activity.

· The Kashmir issue cannot be resolved by the military alone. Governance also has to be improved. There is a requirement to select and depute a special team headed by a Special Secretary to look after this aspect under the Chief Secretary. Their task would be to streamline working of departments, ensure high efficiency and outreach to people. There should be special emphasis on developing our own ‘Kathanak’ or narrative to combat the existing propaganda spewed by anti- nationals. The team needs to control the media and ensure that derogatory and inflammatory programs are not aired.

· There will be a lot of flak. The peaceniks would be crying hoarse. The entire world opinion may turn against us. I do not think it would invite sanctions but a lot of political mileage will have to be used if we are to succeed in this endeavour. All this requires tremendous political will and public support.

One area which I feel is under- utilised is the use of the medium of air- the strength of air power. Surveillance of trouble spots and preventing trans LoC infiltration are key areas in the search for a solution. This cannot happen overnight. It needs a lot of planning and specialist resources. Let us have a brief look at what is involved.

Intelligence is the first prime requirement. Networks both sides of the border need to be reenergised. Sources need to be actively pursued. Intelligence sources within the Valley are dwindling. This state must be reversed on priority. We need to create a single agency which will collate and manage intelligence from many agencies centrally. A central data base needs to be created with easy and quick access to Intelligence teams. Identification remains a key but elusive area. Face matching, DNA matching, fingerprint matching facilities will be needed.

Centralised Planning is essential. We must have a central agency involving the military, PMF, police, R&AW, IB and rep from the State Intelligence branch working together from a single, secure, protected location.

Communications are extremely vital. We have to go in for Data Link, SATCOM and other forms of cutting edge communications. This is the backbone. The network must be able to deliver filtered, exact, timely intelligence to the lowest in the chain, on demand.

Hardware will comprise UAVs, attack helicopters, fixed wing aircrafts on the lines of AC-130s of USAF and for boots on the ground, Special Forces teams.

Command & Control is vital for such combined operations to succeed. It must be unified, transcending inter service boundaries. It must have a flat structure for quick decision making. Authority and on line decision protocols must be in place.

Red Zone Declaration is something that is mandatory for this scenario to succeed. I remember, during my tenure as Chief, some pressure tactics were employed to get us to use air power offensively against Naxals. I had flatly rejected the suggestions. Caught a bit of flak also because of the refusal. My reasons were two. One was unreliable intelligence leading to blue on blue or fratricide or killing innocent civilians. The other was the collateral damage inherent to aerial weapons. I feel there is an intrinsic difference between the Naxals/ Maoists and the terrorists/ separatists. The former have arisen because of absence of governance. They are still within the constitution and do not want to separate from the Union. Whereas the latter want to separate from the Union.

In the Valley, we need to declare Red Zones in infiltration prone areas near the LoC. Each Zone should be a bubble 10 km in depth and include airspace above. This is the zone in which any unauthorised movement will be treated as inimical and prosecuted. These would be promulgated, publicised. Offensive options would be permitted freely in Red Zones.

The scenario would go something like this. The resources would be C-130 ac modified with radar controlled 20mm gun and a 105 mm howitzer similar to the AC-130 of USAF. High Altitude Long Endurance UAVs on station covering either the Red Zones or on demand over trouble spots. Attack choppers on standby during day for any contingency tasks. SF teams ready along with Mi-17 V5 class helicopters to move them. Data link and seamless communication among air & ground resources.

In a classic case the UAV spots targets. The same targets appear on the screens of the C-130 who tracks and neutralises the targets. In Red Zones no clearance would be required except to ascertain that they are not own troops. The same method could be used when large mobs gather. Here we could transport troops if required to contain the situation. Of course, offensive use of weapons would not be called for.

The above scenario appears simplistic. It is not. It will take lot of planning, long lead time, lot of training and practice. It will consume a lot of resources including manpower. Some capabilities already exist and some will need to be acquired. But we must start thinking along these lines if we are to be effective in controlling terrorism in the Kashmir valley.

I have left a lot of things unsaid. A lot of things cannot be discussed in the public domain. The single thought that must prevail in our minds is that Kashmir is an integral part of India and it is our sacred duty to restore the Valley to its pristine conditions. Hard decisions will have to be taken, some out of box, but our resolve must not waver. I have mostly spoken of things military but the situation demands strong political will and public support. It demands improving outreach to people and improved governance. It demands something which other people feel we as a nation lack. Ruthlessness. Et voila.