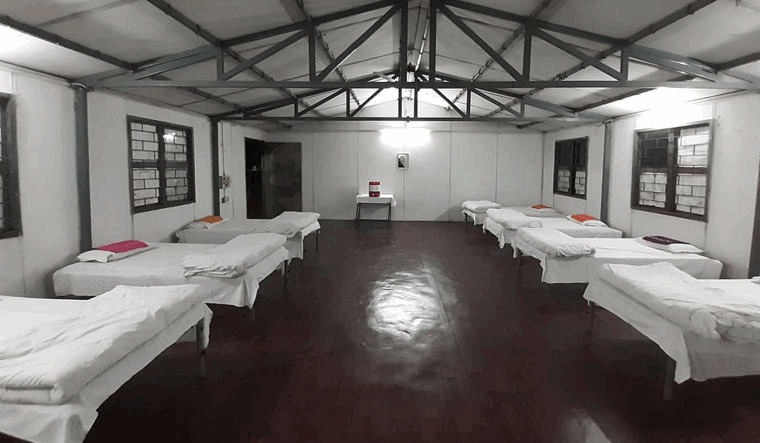 The number of confirmed Coronavirus cases have already gone up to 110 in India as on 15th March, according to Union Health Ministry. On 8th March, 39 cases were reported, in the next seven days, cases increased by 182 per cent. Next two weeks are crucial for India. Schools and colleges in most of the states are closed. Malls, public gatherings, cinema halls, marriages, gyms, swimming pools, international meets and seminars almost every event that could lead to a mass gathering, is being shelved. The battle against the virus is already on top gear. In fact, India has done well so far in its fight to contain the epidemic.

This is a battle that requires all agencies coming together to be able to adequately cope up with the challenge. In fact, it requires every citizen to perform a proactive role to defeat the virus. However, there are distinct indicators already that the campaign has our armed forces in the lead.

The battle against the virus relies heavily on three parallel stages of response. The first among these is to identify infected people or those that could be possible carriers but display no symptoms as yet. The next phase involves a host of containment measures. Finally, it’s medical attention to infected individuals to keep casualty levels low.

Amongst the first quarantine centres to be established by the armed forces was the one at Manesar, near Delhi. The centre was designed to cater for 300 people and has a staff of 60. Reportedly, it’s costing approximately Rs 3.5 lakhs per day.

The armed forces realise fully that to fight the battle the foremost requirement is to keep its house intact. If any cantonment in our country has a Coronavirus outbreak, its effectiveness in fighting the battle in its area of responsibility will erode exponentially. The forces are particularly vulnerable since their men live in barracks, with individuals sleeping, dining, exercising and playing together. The realisation of this vulnerability is reflected in the fact of instructions having already been disseminated to the rank and file on the issue.

The armed forces have also banned all non-essential foreign travel. Army postpones all recruitment rallies by a month. The Indian Navy has postponed its most important Naval Exercise – Milan. Milan is a biennial naval exercise involving the participation of large numbers of foreign navies. In the previous edition in 2018, a total of 16 nations had participated in the exercise.

Quarantine facilities have been set up by the Army at Binnaguri, Chennai, Devlali, Gorakhpur, Gaya, Jaisalmer, Jodhpur, Jhansi, Kolkata, Suratgarh, Secundrabad whereas the Navy has set up centres at Mumbai, Cochin and Vizag.  The Indian Air force has been flying its fleet of transport aircraft to evacuate Indians from Wuhan, Iran, Japan and Italy. These evacuees have been tested on landing and sent to one or the other quarantine camps. All military hospitals have their isolation wards ready.

We have also extended assistance to a few countries. A facility has been created in Maldives to cope with the pandemic. A testing facility is running in Iran.

Prime Minister Narendra Modi had a video conference with heads of states of SAARC countries. Pakistan was represented by the Special Assistant on Health instead of its Prime Minister.  Modi proposed a Covid-19 Fund based on voluntary donations by all member countries.

The response so far has been quite adequate, to say the least. However, should the virus spread further, it’s difficult to visualise the kind of confinement that the Chinese could enforce at Wuhan being imposed in a democratic country like ours. However, the advantage is, with the media has given it wide coverage and the government already geared up, we are hopefully in a position to stall any exponential surge in the spread of the disease.

The medical services in the country would be stressed and will require support from all quarters to fight the virus. The private healthcare sector is also geared to pitch in. The silver lining is the virus is not expected to survive in hot climatic conditions and most of the country is experiencing a creeping summer, already. Notwithstanding such intrinsic vulnerability of the virus, the government will have to ensure we remain ahead of the curve, at all costs.