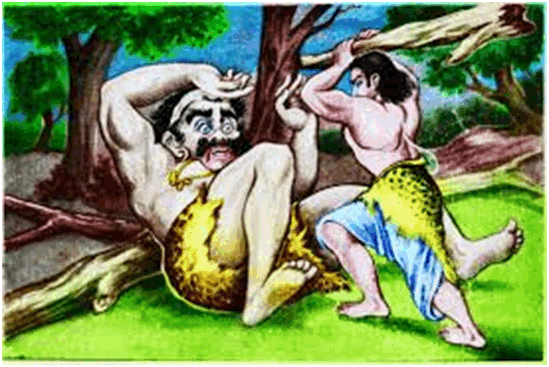 The ancient Indian epic Mahabharata is replete with anecdotes that are also parables; lessons which are applicable even in today’s context. The belligerence and heavy-handedness of the Chinese Communist Party (CCP) harkens back to the allegory of Bakasura – a Rakshasha (Sanskrit), Demon (English) or Yaoguai 妖怪 in Chinese – who lived during the same period as the Pandavas and Kauravas.

Bakasura, a cannibal demon, would demand daily cartload of food and human offering from neighbouring villages, else he would unleash his wrath. Terrified villagers would propitiate Bakasura, resulting in one family losing a member every day. During their banishment, the Pandavas were hosted by a family who was fortuitously selected to provide Bakasura with his nourishment. The Pandavas, instead, sent the mighty warrior Bhima, for requiting their debt to their hosts. Bhima, thereafter, made short work of Bakasura, killing him and freeing the villagers from their dreaded burden.

This allegory could easily define the current state of mind of the CCP – a self-promoting cabal of bourgeoisie whose only interest seems to be self-preservation. Much like Bakasura, the CCP has sought to terrorise all its neighbours with brazen acts of violence and revisionist military manoeuvres in – Japan, South Korea, Indonesia, Malaysia, Singapore, Vietnam, Brunei, Laos, Hong Kong, Taiwan, Thailand, Myanmar Cambodia, India, Mongolia, Nepal, Bhutan, Russia, Central Asian Republics….the list is longer. And this is just the list of nations who have the misfortune to share land or maritime border with the CCP’s China. There is a much longer list of countries who face debt and sovereignty challenges because of the CCP’s grandiose but diabolic ‘One Belt-One Road’, now popularly known as ‘One Debt-One Road’.

India and China are both ancient civilizations, bound by the all-permeating thread of history. Since the age of Bakasura (earlier than 1500 BCE), both these civilizations, Indian and Chinese, have been a beacon for human progress. The ravages of time and colonization wore down both civilizations; however, both have renewed with a sense of purpose. While India adopted a liberal democratic model, the CCP hijacked their citizens in 1949; a fact that is rued to this day by China’s neighbours.

The CCP’s recent methods, while being appalling, is not unexpected. Severe internal strifes, economic duress due to the CCP virus pandemic and a series of impediments in Hong Kong and Taiwan have pushed Xi Jinping to the wall. CCP’s inherent ultra-nationalistic tendencies and sycophantic politburo are leading the CCP towards their Waterloo – albeit on the jagged peaks of Ladakh. The CCP would be well advised that while the 1962 conflict seared the minds of Indians who are today in their 70s, the CCP has now sown seeds of enmity in 1.4 billion Indians, of whom nearly70 per cent are below the age of 35, and would live long enough,  notwithstanding the CCP virus.

The 1962 conflict was imposed by the CCP’s army with massive incursions across fronts chosen in 1962. By 30 November 1962, the CCP army withdrew to a self-defined Line of Actual Control (LAC). India, which was at that time unable to prevent the advance, nor had any say in this retreat by the CCP army. A commonsense query would therefore be: How can the CCP army claim anything beyond the LAC they themselves withdrew to in 1962? If at all, India has a right to question territory annexed by the CCP army during their belligerent military actions in 1962.

The CCP’s policy of self-aggrandisement may also not continue for long. The lily-livered CCP army, in spite of ambushing the Indian Army in a sneak barbaric attack, faced an unexpected push- experienced a reality check in the Galwan Valley, suffering nearly double the number of casualties compared to the battle-hardened Indians. Japan, Vietnam and Indonesia are pushing back aggressively in the South China Sea. Taiwan and the US are readying for a confrontation, with three US Carrier based Groups arrayed against the CCP’s Navy.

The Australians and Canadians have also had enough of the CCP’s impertinence. WHO has also buckled and is now sending a team to China to investigate the origins of the CCP virus. Hong Kong has been sent a chilling message on 30 June with passing of the National Security Law, effectively bringing an end to its democratic system. It looks like the chickens have come home to roost.

The CCP has historically been headed by willy leaders, who were aware that patience is the key to realise global ambitions. Unfortunately, the current CCP leadership has the patience of a spoilt brat. The litany of impertinent behaviour imposed on neighbours may well ensure that the CCP will not be able to survive the vicissitudes of their response.

Much like Bakasura of yore, the CCP has probably bitten off more than it can chew and gulped more than it can digest. With global opinion gravitating against its actions, the CCP should reorient itself and take stock, lest it meets the same fate as the mythicalYaoguai 妖怪.