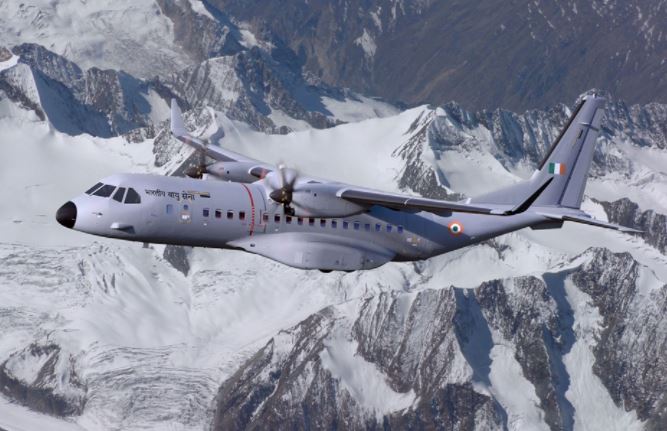 The deal to buy the C-295 MW transport aircraft was sealed between the Ministry of Defence (MoD) and Airbus Defence and Space, Spain to replace the Indian Air Force’s ageing fleet of Avro-748 planes today, 24 September. The MoD has also signed an Offset Contract with Airbus Defence to discharge its offset obligations through direct purchase of eligible products and services from Indian Offset Partners. These contracts were signed following the approval accorded by the Cabinet Committee on Security (CCS) earlier this month.

The much-delayed procurement of the Avro replacement project was in the works for almost a decade. Under the deal, Airbus will supply the first 16 aircraft in flyaway condition within 48 months of signing the contract. While the remaining 40 will be manufactured in India by a consortium of the Airbus Defence and Tata Advanced Systems Limited (TASL) within 10 years of signing the contract under the Make-in-India initiative.

This is the first project of its kind in which a military aircraft will be manufactured in India under the Transfer of Technology (ToT) by a private company. The deal would only provide a major boost to the transport fleet of the Indian Air Force. This deal is very critical for the Air Force’s ageing transport fleet with the IAF also looking to replace the AN-32s in service. The IAF has 56 Avro transport aircraft procured in the 1960s and is in urgent need of replacement.

It is the first ‘Make in India’ aerospace programme in the private sector, involving the full development of a complete industrial ecosystem – from the manufacture to assembly, test and qualification, to delivery and maintenance all through the lifecycle of the aircrafts.

The C-295MW is a transport aircraft of 5-10 tonne capacity and has a rear ramp door for quick reaction and para dropping of troops and cargo. It is powered by Pratt & Whitney PW127 engines, part of the PW100 family. All the IAF C295MW aircraft will be handed over in transport configuration and equipped with an indigenous Electronic Warfare Suite.

“Today is the momentous occasion. This project itself is probably the deepest Make in India project in the private sector where the partnership with Airbus will literally take with procuring raw materials at one end and converting these into a flyway aircraft at the site. This has not been done in the private sector,” observed Sukaran Singh, MD & CEO, Tata Advanced Systems Limited (TASL) while addressing a press conference after signing the deal in the capital.

Singh also informed that conjointly, TASL and Airbus, have considered than 100 sites to set up the production facility, but a final call in consultation with all stakeholders, including the locals, is yet to be taken.

The project would give a boost to the aerospace ecosystem in India wherein several Micro, Small and Medium Enterprises (MSME) spread over the country would be involved in the manufacturing of parts of the aircraft.

“This morning we signed the deal and that means the industrial journey starts. This is the first Make in India project of military aerospace bringing together the private sector Airbus and Tata to make this possible in India. By doing so we will manufacture this superior aircraft operating globally that has booked more than 5 million hours in service. It will be made in India that will create 15,000 direct jobs and 10,000 indirect jobs,” said Jean Brice Dumont, Executive Vice President Military Aircraft, Airbus Defence & Space.

Remi Millard, President and MD, Airbus South said the deal will place India on the global map to manufacture such aircraft. “With the signing of this deal, it is a new dawn for India’s defence industry. It will create the ecosystem to manufacture, assemble and test, to deliver and maintain the aircraft. It will place India on the global map of the prominent aircraft manufacturers in countries,” he said.

He further observed that the project is a lot more ambitious than mere technology transfer as it is aimed at manufacturing the aircraft in the country, while answering a question on ToT.

According to Airbus, the C-295MW has a proven capability of operating from short or unprepared airstrips and can be used for tactical transport of up to 71 troops or 50 paratroopers, and logistic operations to locations that are not accessible to current heavier aircraft. It can airdrop paratroopers and loads and also be used for casualty or medical evacuation. It can also perform special missions as well as disaster response and maritime patrol duties.