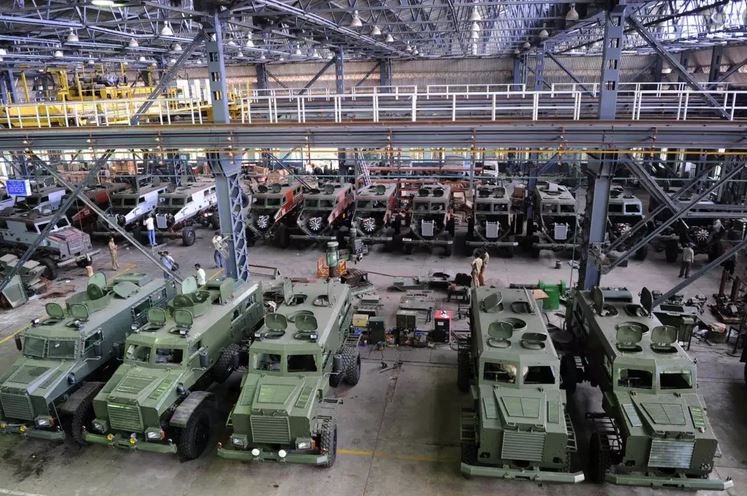 Corporatisation of Ordnance Factory Board, Recipe for Self Reliance

In Part I of the article, the author gave a historical perspective of the colonial legacy of Ordnance Factory Board (OFB) and the many challenges it faces leading to sub-optimal functioning today. In this part, Author examines the more recent defence reforms that would advance the country towards ‘Atmanirbharata’, and examines the role of OFB in these new environments.

As an institution, the OFB should have been a prime component of our ‘Atmanirbharata’, (self-reliant) and vital for our strategic autonomy and comprehensive national power (CNP). Accordingly, one major component of the special economic package of Rs 20 lakh crores announced by the Prime Minister on 14 May 2020 to revive the Indian Economy from the fallouts of COVID-19, addresses key structural reforms in the Defence Sector.

On 16 May, the Finance Minister revealed the ingredients of the reforms; one of them being the ‘Corporatisation of the OFB’. The Defence Minister Rajnath Singh followed up and announced on 9 August a list of 101 types of military equipment, weapons and ammunition which will be progressively barred from being imported starting December this year. The “Negative Import List” of 101 embargoed items comprises not just simple parts, but also some high technology weapon systems like artillery guns, assault rifles, warships, sonar systems, submarines, light transport aircraft, light combat helicopters (LCHs), radars and light combat aircraft. Any item on the ‘negative list’ can now only be sourced from the domestic industry. Ministry of Defence (MoD) will place orders worth Rs 4 lakh crores with the domestic industry over the next 5-7 years by cutting down on these imports. For now, India remains a top importer of weapons and equipment.

The key highlights of the announcements concerning the defence sector as given out in the various press releases issued by the Government of India are enumerated below:

Enhancing Self Reliance in Defence Production

The reforms announced by the government to boost indigenous defence production have been welcomed by the Confederation of Indian Industries (CII) and various private defence companies operating in the country, as they believe that these reforms will provide a boost to domestic manufacturing in the defence sector.

The private sector was permitted to enter the defence industry from May 2001 up to 26 per cent and raised to 49 per cent in 2015. Many studies including by the government concluded that any foreign direct investment (FDI) below 51 per cent ( FDI up to 100 per cent was also offered in case of a state of the art technologies, after government approval) will not attract investment in India, mainly due to inability to participate in decision making. A few Joint ventures (JVs) were set up, but indigenisation efforts did not take off.

Few obvious advantages which accrue by increasing FDI to 74 per cent are broad basing of defence industrial base; induction of niche technologies; will encourage foreign defence conglomerates to set up subsidiaries especially under the ‘Buy Global-manufacture in India’; create an eco-system to procure spares and parts from the local manufacturers to cut down on the cost of the equipment further cementing ‘Make in India’ during crisis situations; a catalyst for making India as an ‘Export Hub’ for defence equipment, especially when nations are looking for alternative destinations to China; boost our economy, create sensitive infrastructure, and provide employment.

Some of the challenges and concerns in raising the FDI limit are; valid concern on a threat to national security if foreign nations/company intervenes/interferes in functioning; a challenge to our indigenous industry to grow (rules allow JV in niche technology/when we don’t have the tech); however, the overall benefits override any negatives.

The Corporatisation of OFB announced by the government was incorporated in PM Modi 2.0 manifesto as part of their ‘167 transformation ideas’. However, the issue has been debated since a long time. The corporatisation was first suggested by Nair Committee in 2000, thereafter by Kelkar Committee in 2005 and Raman Puri Committee in 2015. Despite stiff opposition from the trade unions who are calling it ‘arbitrary, illegal and unjustified’, the government appears determined to implement it. (The rationale for doing so has been covered in Part I of this article).

The Corporatisation of OFB will put it at par with other DPSUs managed by its own board of directors with broad guidelines from the government. The growth envisaged is a turnover of Rs 30,000 crore by 2024-25 annually against exiting Rs 12,000 crore. A high level committee under Vice Admiral Raman Puri Committee recommended grouping existing ordnance factories under three or four verticals with core competencies. A likely structure categorising factories into four verticals of Ammunition, Weapons, Explosives and Combat Vehicles is given below:- 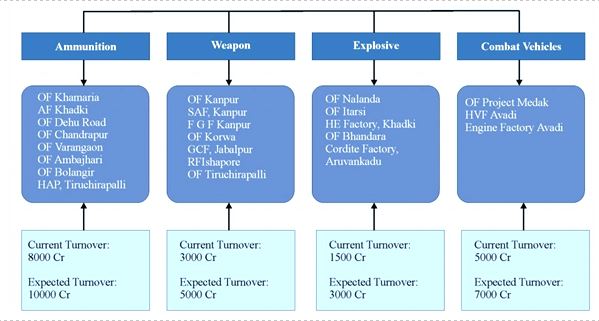 Corporate OFB will be allowed to forge partnerships with the private sector as per the MoD’s approved policy and will continue to receive orders from the country’s security forces. It will also be granted a special preference of 15 per cent above L1 price for “Make” and “Buy and Make” category products. The Centre will support OFB in case of losses, by way of loan for 30 per cent of the total shortfall and by way of equity investment for balance 70 per cent of the amount. The working capital for the next five years will be provided by the Department of Defence Production (DDP) as a one-time corpus fund. Capital investment for ongoing and sanctioned projects will also be provided.

Some important benefits which will accrue post corporatisation are; improved efficiency leading to increased production capacity, greater autonomy and faster decision making; competitive pricing as competing with private industry; induction of niche technology from the best sources/nations; increasing flexibility and financial independence; earnings through exports; and most important benefits to Armed Forces who will get more ‘bang for the buck’ for modernisation and procurement of latest systems improving capability and capacity. Some of the concerns of the employees and critics have been highlighted in Part I of the article.

To boost indigenisation and private defence sector, the government has promised to set up a separate budget for internal capital procurement. This ideally should be over and above the defence budget, with provision for R&D which is the hallmark of all growing powers. One thought which needs further study and analysis is to place Department of Defence Production (DDP) under the Department of Military Affairs (DMA), and Corporate OFB under Ministry of Industry for optimal functioning.

We live in a multi-polar, multi-domain world which is currently going through a turbulent, violent phase forcing nations to carry out strategic balancing to retain/enlarge exploit strategic space. Nations are concurrently carrying our cooperation, competition, confrontation and engaging even in conflict if national sovereignty dictates so. India believes in ‘strategic autonomy’ and one of the vital ingredients to attain it is by becoming self-reliant in defence, in terms of forces, munitions and equipment, including niche technology. The corporatisation of OFB is likely to be a decisive step and a game-changer towards self-reliance in defence production.

5. Hopefully, it will transform ordnance factories into a modern, state of the art facility with flexible and better decision making in its functioning. It will make them more competitive and hopefully convert to a profit-earning organisation within the next few years. However, the more important part will be the execution of these reforms on the ground. The exact contours and timelines for implementation are still to be released by the government and eagerly awaited by the Indian and foreign defence companies. The corporatisation of OFB is a defining step towards an ‘Aatmanirbhar Bharat’.