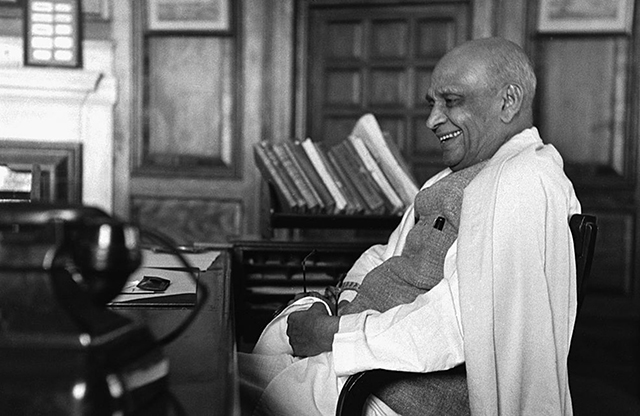 It’s difficult in democracies to be a hero. The large pantheon of critics paints every possible candidate in darker hues. Few men continue to be honoured though, notwithstanding the divides of political affiliations, regional identities, the compulsion to be a critic, and more. Sardar Patel finds his way to a tall pedestal in Indian history. His strategic vision was a great asset that we as a nation, perhaps, failed to utilise adequately.

7 November 1950, will always remain an iconic date when a thought-provoking and far-reaching insight was penned on the then-current situation in our country in the backdrop of a larger regional and local political scan. It was a letter written by the then Home Minister, Sardar Vallabhbhai Patel to the then Prime Minister Jawahar Lal Nehru. The letter has been referred to by Jaswant Singh in his book titled ‘A Call to Honour’. The letter itself is an eye-opener. Fondly called Sardar, Patel analysed our policy on China and laid out an accurate appreciation of the likely situation India would face in the days ahead and the ways and means to navigate through it.

The letter covered a wide range of strategic and geopolitical issues which had a direct bearing on our home/foreign policy. In 1950, we were just about three years into being Independent and struggling to find a place in the emerging world order.

We were also trying to come out of the shadows of British rule. Our political hierarchy had the task of wading through the troubled waters. At that point in time, we had come out of two major setbacks – the heart-wrenching partition and the betrayal by Pakistan when they launched Operation Gulmarg in October 1947 to forcibly annex Kashmir. The war has been lucidly described in the book ‘Slender Was The Thread: Kashmir Confrontation 1947-1948’ by Lt Gen LP Sen.

Simultaneously, the machinations of the Chinese were continuing, not quite in sync with our stated stand on the subject. The Chinese consolidated their borders immediately on gaining independence while we looked on, apparently absolutely unaware of the game being played by the Chinese. The Johnson-Ardagh and the Macartney-MacDonald lines were used on British maps of India. Until at least in 1908, the British took the Macdonald line to be the boundary, however, nothing was done on the ground to ascertain the actual lay and identification of the line.

The Chinese moved into the Aksai Chin area which gave access to their strategic Xinjiang province and finally moved into Tibet claiming it as theirs. The bigger embarrassment was that we did not even know of this move for quite some time. The boundary presented by Henry McMahon, the ‘McMahon Line’ was not ratified by the Chinese leadership and we believed in the boundary accord and did not even bother to ascertain or identify the boundary on the ground to find out what is ours. Our policy on Tibet was not really supported by the Chinese leadership. Today, 75 years gone past, the issues elaborated by Sardar, panned out exactly as defined by him. Even today, these issues remain so relevant and contemporary as if the commentary of 2021 was written in 1950.

Lengthening Shadow of the Dragon in the 1950s

The Chinese intentions were quite clear even in the initial years. They conveyed a fallacious notion about the Tibetan issue, made us look the other way while they were preparing for its occupation. The events till 1962, and beyond turned out to be the way it was appreciated by Patel. We failed to read the events even after these were flagged. As aptly put by Sardar Patel, “The Chinese government has tried to delude us by professions of peaceful intentions”. Chinese were playing their game Wéiqí, ‘hiding their intentions’. The Chinese in all their interactions were aloof and distrustful.

The Chinese leadership was not very comfortable with the projection of Nehru as a world leader. While they played along, they resented it. Due to certain geopolitical considerations, we were getting closer to the Soviet Union, which was not to the liking of the Chinese. They cultivated our hostile neighbour to contain us. Coming closer to Pakistan was a strategic move in the Asian region by the Chinese. The ‘Bhai – Bhai’ syndrome made us complacent about the intentions of the northern neighbour. The ‘age of Innocence’ as espoused by Jaswant Singh in his book “A Call to honour” ended. We continued our forays into international politics with the Bandung Conference on Non-Alignment and then followed up with ‘Panchsheel’ which proved fatal, as the later period would show us.

Chinese invented a threat of the Anglo-American nexus in Tibet and concluded that India is part of the nexus. They lulled our ambassador into complacency while they were preparing for Tibet. Sardar also remarked about the lack of firmness in our foreign ministry in dealing with them. Presumably, we were overwhelmed by their presence and saw them as potential friends, an illusion that wasn’t destined to happen. As rightly pointed out by Sardar Patel in his letter “During the last several months, outside the Russian camp, we have practically been alone in championing the cause of Chinese entry into UN”.  We recommended their inclusion in the UN then, while today they veto ours. We made adequate overtures to convince the Chinese leadership of our good intentions and goodwill with Panchsheel as the driver for such liaisons, but they chose to be sceptical about our stand. Sardar Patel pointed out this attitude and flagged the dangers which we failed to read.

The Indian leadership at the political and bureaucratic level failed to see through the wall and seek advice from the military in understanding the Chinese actions at all levels, Political, Strategic and Military. Their aim was clear and they were proceeding as per their plans, clearly hiding their intentions, a la Wéiqí. Sardar Patel was able to fathom the intentions of the northern adversary and warn the establishment to undertake preventive and precautionary measures.

As a result, Tibet was lost to China. The Chinese leadership was quite clear about their aim and the road to it. They moved their attention to Burma, now Myanmar, in a bid to encircle the so-called Southern Tibet – NEFA, now Arunachal Pradesh. Our North East region was vulnerable and porous and this was exploited by them. This was seen as a weakness on our part and the Chinese commenced their support to the dissident groups in the area i.e., Naga groups and later on valley-based groups in Manipur. The Assam imbroglio was also supported by them. Clearly, they were playing the game as planned by them. This game has been brought out by Bertil Lintner in his book “The Great Game East”.

Post-1950, the Chinese put into effect their grand plan to dominate the region. India had always been in their mind and as such, they ensured that the dispute remained smouldering. Chinese have, in the last 70 years, resolved the boundary dispute with all its neighbours, but India. They never recognised Arunachal Pradesh and termed it Southern Tibet. Mc-Mahon Line was never recognised and they had also not ratified the 1914 treaty which was signed between the British and Tibetan representatives. This non-acceptance of the treaty was a clear signal of the things to come. Tibet had no such demarcation line with China, which was used by the Chinese to invade Tibet, bringing them adjacent to our northern borders.

Chinese continued with the policy of mistrust amidst the ‘Panchsheel Treaty’ era. The run-up to 1962 was being paved by them. It worked again, reminding us of those prophetic words “delude us by profession of peaceful intentions”. Chinese did not recognise any treaty with Tibet and regarded Tibetan territory as theirs. Post-independence, the Chinese had realised the importance of Tibet and its access to the strategic Xingjian province and their all-weather strategic partner Pakistan.

They worked towards their national interests while we were busy projecting ourselves as an emerging new world country and apostle of world peace. We were also engaging China as a peaceful neighbour which was acceptable to the Chinese authorities along with the tenets of Panchsheel. Chinese realised India, being a big nation, is likely to be a threat in future. They ensured that the boundary issue is kept simmering up to an acceptable level. They took advantage of our painful partition holocaust and engaged with our western adversary in line with Chanakya’s Mandala theory principle. “There is no Friendship without self-interests. It is a bitter truth. Because nations always act in their political, economic and military self-interest, even times of peace have the potential to turn abruptly into times of war, allies into enemies, and even enemies into allies”. (Kautilya’s Mandala Theory by Shobhit Mishra.)

Having lost Tibet, it was very clear that our northern borders were not safe. They were porous and vulnerable. All along we had Himalayas and Tibet, but now with Tibet gone, they were knocking at our northern doors. Sardar Patel emphasised the defence of the northern borders in clear terms. Having fought the 1947 conflict over Kashmir with Pakistan we were assuming that the major threat was from the western side, and we neglected our northern borders influenced by the impression created by Chinese overtures. Sardar Patel having analysed the situation correctly appreciated that “thus, for the first time, after centuries, India’s defence has to concentrate on two fronts simultaneously”.

We missed the warning and missed it big time. We continued to shape our defence and infrastructure development needs keeping in view our western adversary thereby neglecting the northern adversary. Our military concentrated on our western adversary’s equipment and tactics. However, though rather late, we appreciated a two-front scenario with China being the second one and later graduated to “two and a half” with the proxy war in J&K thrown in as ‘half’.

Too late a realisation!

During the post-independence period, the Chinese made no efforts at hiding their intentions on the McMahon line or LAC in Ladakh. The period from 1950 and the run-up to 1962 should have alerted us to understanding the game being played.  Boundary intrusions or incidents continued in Arunachal Pradesh and Ladakh. Doklam in 2017 and Galwan 2020 were the outcomes that we did not visualise.

The threat from communism was subtly articulated in the letter. Sardar Patel was very clear about the ideology of the Chinese and visualised this ideological expansionism as a threat to our northern areas. The northern areas of Nepal, Sikkim, Assam were porous and vulnerable with China so close to our borders. Sardar Patel had presented his scan of the influence of outsiders in our Northeast Region and the implications of such alliances for our security. His analysis of the spread and effect of communism in the eastern region and its spread in Telangana and Warangal is pointed and specific.

Sardar Patel accurately appreciated the happenings and their political and security implications which our establishment failed to read.  We were engrossed in global affairs, but we neglected our security concerns nearer home. The issues flagged by the Sardar were very specific and defined the likely path of Chinese power play, security of our Northern borders, and Chinese entry into the UN. We missed taking action on such an accurate and cogent analysis into the future.