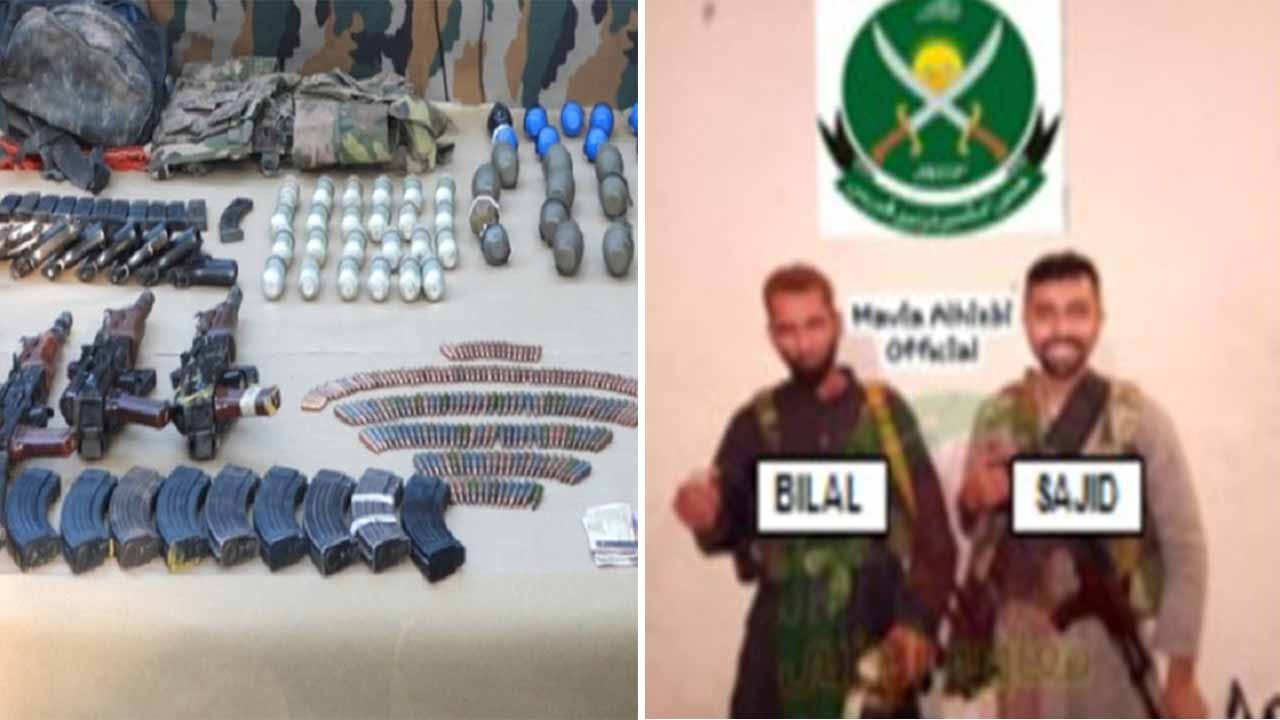 Continuing with the series of special reportage on Pakistan’s proxy war against India, this article examines the modus operandi of some of the terror attacks executed in the hinterland of Kashmir. The article is based on the analysis of the official documents accessed by BharatShakti that establishes a direct link of Pakistan’s involvement in terror activities. 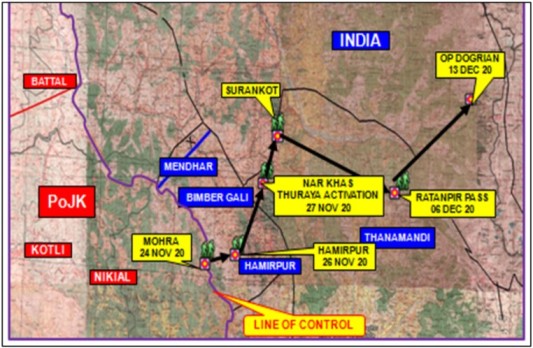 The role of Pakistan in aiding and abetting terrorism in Jammu and Kashmir continues unabashedly and it has never stopped supporting the terror activities in the region. For instance, just before the onset of winter in December 2020, a joint group of Lashkar-e-Toiba (LeT) and Jaish-e-Mohammad (JeM) terrorists had been pushed into the Jammu region in an apparent attempt to disturb the ongoing District Development Council (DDC) elections which generated a tremendous response from the people, causing much frustration to Pakistan. Two Pakistani terrorists were killed and their local associate was captured during an encounter with security forces in the higher reaches of Surankote in the Poonch district. 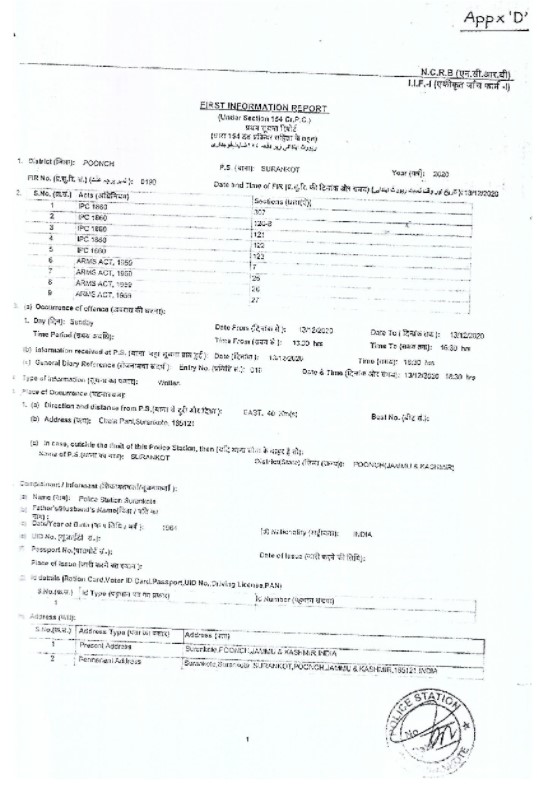 According to the FIR No. 0190/2020, accessed by BharatShakti, warlike stores – two AK 47 rifles, one under-barrel grenade launcher and one satellite phone, hand grenades made in Pakistan, Thuraya Set (IMEI No 352384001034690), mobile phones, GPS and a handwritten diary were recovered from the eliminated terrorists. The analysis of mobile phones revealed 203 images related to instructions on the making of explosives, use of detonators, chemicals and time fuses. The handwritten diary included instructions on navigation, map reading, use of arms and ammunition including sniper rifles with binoculars, communicating through the use of code words, use of chemicals, explosives including RDX, petrol bombs and setting of timers and fuses.

Three weeks before the above incident, four Pakistan-based Jaish-e-Mohammad (JeM) terrorists were killed in a gunbattle on the Jammu-Srinagar National Highway, near Nagrota on 19 November, after a truck carrying newly infiltrated terrorists was intercepted. The terrorists were planning “something big” on the anniversary of the 26/11 terror attacks in Mumbai, claimed security forces. According to intelligence inputs, initial data from a global positioning system (GPS) device and mobile phones carried by the four terrorists shows that they were in touch with Pakistan-based terror group Jaish-e-Mohammed’s (JeM) operational commanders Mufti Rauf Asghar and Qari Zarar to wreak havoc in the Valley. Mufti Asghar is the younger brother of JeM chief and UN-designated global terrorist Masood Azhar.

Reacting to the incident, Prime Minister Narendra Modi tweeted “Neutralising of 4 terrorists belonging to Pakistan-based terrorist organisation Jaish-e-Mohammed and the presence of large cache of weapons and explosives with them indicate that their efforts to wreak major havoc and destruction have once again been thwarted”. 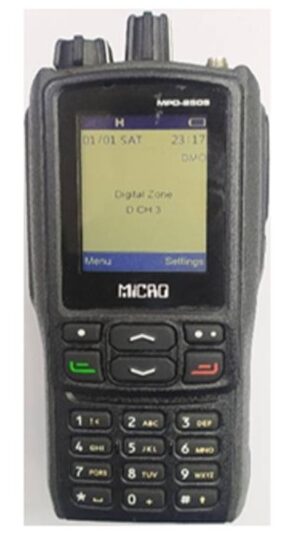 The weapons, ammunition, grenades and explosives (RDX) carried by them clearly indicates that they had a big strike planned in the Valley. Eleven AK-series rifles, 30 Chinese grenades, 16 AK ammunition clips and 20 kilograms of RDX were recovered from the bodies. Apart from the recovery of weapons, smartphones made in Pakistan and digital mobile radio of QMobile and micro-electronics with coded messages were found in possession of the slain terrorists. The militants also had medicines manufactured in Pakistan, apart from GPS devices and a wireless set. The findings proved that the militants were in touch with their Pakistan-based handlers before they were killed. These radio sets are used by Pakistan’s security and government agencies.

In yet another encounter, security forces recovered radio set, matrix sheets and handwritten dairy from three LeT terrorists, including two Pakistanis, who were eliminated in the general area of Hakhripur in Pulwama district on 20 October 2022. The analysis of coordinates written in the diary revealed that terrorists had adopted the infiltration route from Minimarg in POJK (MT 8290) to Badgam on the Indian side (MT 6303). 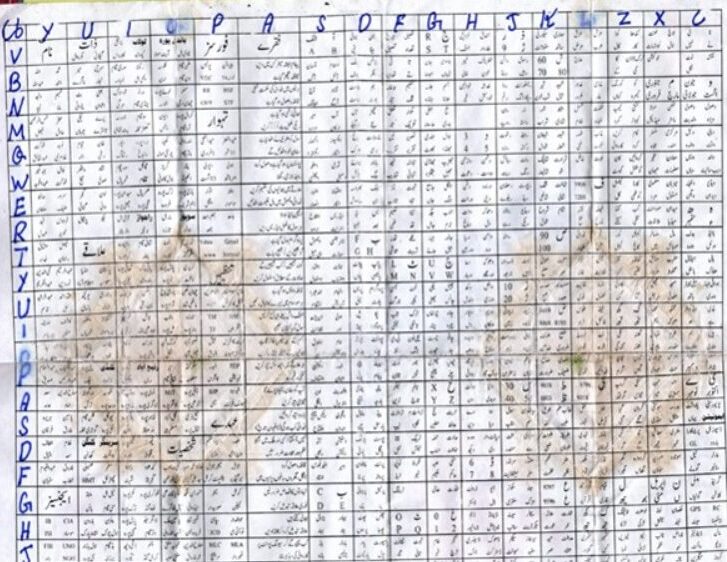 According to the seizure memo of the FIR No. 243/20, security forces recovered a huge cache of arms and ammunition including 2 AK-47 rifles, 1 AK-56 rifle, 6 Ak-47 magazines, 3 AK-56 magazines and 159 AK rounds of ammunition from slain terrorists.

The year 2021 witnessed the killing of a total of 182 terrorists, including 44 of their top commanders and 24 foreigners, in 100 anti-terrorism operations by security forces, according to official records. Out of the 44 top militants killed, 26 belonged to Lashkar-e-Toiba (LeT), 10 to Jaish-e-Mohammad (JeM), seven to Hizbul Mujahideen (HM) and one to Al-Badr, the data revealed.

Security forces have killed 39 terrorists including 10 Pakistanis so far, this year. In the last two months, the figures reveal that a total of 15 Pakistani intruders were eliminated in the hinterland in various operations by security forces in Poonch, Uri, Nowshera sectors. As per the latest records, four terrorists, including a Pakistani commander of the Jaish-e-Mohammad (JeM), were killed this month. The encounters took place in the Pulwama, Ganderbal and Kupwara districts of the Kashmir Valley on 12 March. On 16 March, three more terrorists were neutralized in the encounter at the Nowgam area of Srinagar district. All three slain terrorists were involved in the recent killing of the Sarpanch of Khanmoh area of Srinagar. They were affiliated with The Resistance Front (TRF), an offshoot of the Pakistan-based Lasker-e-Toiba (LeT) outfit.

India has been raising the issue of cross border terrorism with the international community. Pakistan is on the grey list of the Financial Action Task Force and faces sanctions if it is blacklisted. BharatShakti learnt from intelligence agencies that the Pakistani deep state is using Islamist jihadist groups such as JeM and LeT to target Jammu and Kashmir by sending in suicide attackers across the border. These are the main terror groups who have sought cover by propping up The Resistance Front (TRF) which is posing as an indigenous Kashmiri group to continue fanning terrorism in J&K.