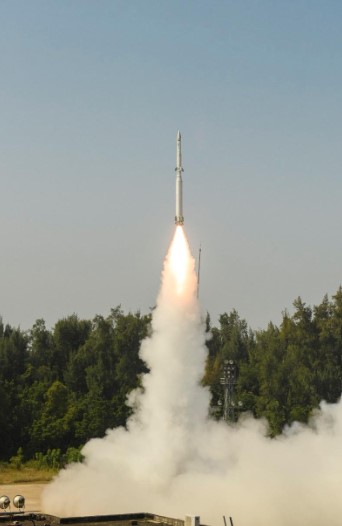 The Defence Research and Development Organisation (DRDO) successfully tested for the first time a long-range interceptor missile, called AD-1, on 2nd November at APJ Abdul Kalam Island off the coast of Odisha. The maiden flight test of the Phase-II Ballistic Missile Defence (BMD) interceptor missile was carried out with the participation of all BMD weapon system elements located at different geographical locations, the Ministry of Defence ministry (MoD) said.

“AD-1 is a long-range interceptor missile designed for both low exo-atmospheric and endo-atmospheric interception of long-range ballistic missiles as well as aircraft,” the MoD said. The exo-atmospheric ranges are 130 km in altitude. Long-range nuclear missiles travel over 200 km in the air before descending to hit the target. It is propelled by a two-stage solid motor and equipped with an indigenously developed advanced control system, navigation, and guidance algorithm to precisely guide the vehicle to the target.

During the flight test, all the sub-systems performed as per expectations and were validated by the data captured by a number of range sensors, including Radar, Telemetry and Electro-Optical Tracking stations deployed to capture the flight data, MoD statement said. 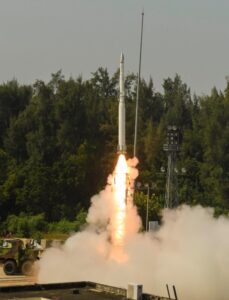 A BMD is used to bring down enemy nuclear missiles mid-air. The BMD aimed at “with a large kill altitude bracket”. This means the range of AD-1 can bring down enemy missiles farther away from India and at greater altitudes.

Defence Minister Rajnath Singh described the missile as a “unique type of interceptor” equipped with advanced technologies available only in a few countries. He exuded confidence that it will further strengthen the country’s BMD capability to the next level. The DRDO Chief Samir V Kamat said the interceptor would provide immense operational flexibility to the users to engage different types of targets.

India is pursuing its BMD programme in two phases – the first phase has been completed, while the second is underway. The second phase is for validating intercept systems in a new range category.