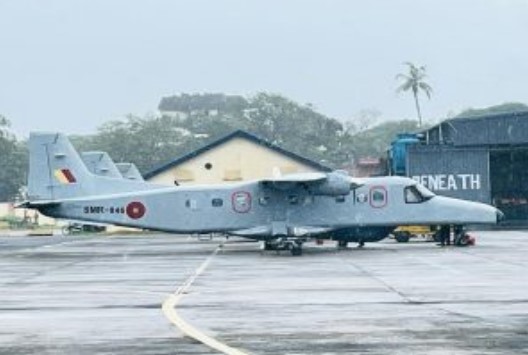 The first of two maritime patrol aircrafts that Sri Lanka is acquiring from India after a protracted negotiation process will arrive at Katunayake Air Force base next Monday (15) The Sunday Morning reliably learns.

The Dornier 228 Maritime Patrol Aircraft (MPA), a licensed built aircraft by the Hindustan Aeronautics Limited (HAL) of India will be ferried to Sri Lanka by a Sri Lanka Air Force crew, it is understood. The SLAF had dispatched a 15-member crew for training on the aircraft to India in April 2022 who have completed their training and qualified to fly and maintain the aircraft. The aircraft is to be maintained by a trained SLAF ground crew under the supervision of Indian engineers.

It is understood that the arrival of the (MPA) will be witnessed by senior government officials including the President and Indian diplomats.

Sri Lanka has been pursuing the acquisition of a fleet of dedicated MPA since the mid 1990’s. Sri Lanka is also expected to acquire a Beechcraft King Air 360ER maritime patrol aircraft from the United States in the future. Earlier, the Ministry of Defence had considered acquiring surplus Lockheed Martine P-3C Orion MPA’s from Australia and Japan. However, the plans had failed to move forward.

The Dornier 228’s entry into the Sri Lankan armed forces service, comes following a government-to-government discussion which began in 2018 when Sri Lanka requested to acquire two aircrafts from India to improve the islands’ maritime surveillance capabilities. Sri Lanka has been proactive over the last few years in capacity building to ensure it has adequate awareness and response capabilities to respond to maritime crime and security threats in its Exclusive Economic Zone (EEZ) and the high seas.

Earlier this year, the Cabinet of ministers granted approval for two Dornier 228 MPA’s to be acquired from India. The first MPA, arriving next Monday is one which was in service with Indian Naval Fleet Air Arm on gratis basis for initial two years.

According to sources at the Ministry of Defence, this is due to the production time required to manufacture a new aircraft at HAL for the program. Under the agreement between both governments, Sri Lanka will purchase one new MPA from India, while another new aircraft of the same make is to be gifted to Sri Lanka by India.

The Indian built MPA is expected to enter service with the SLAF’s No.03 Maritime Squadron, which is based at China Bay, Trincomalee.

(By arrangement with ‘The Morning’)