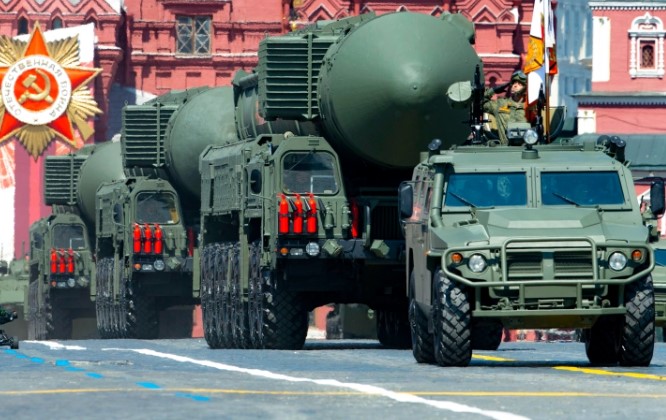 On 8 August 2022, Russia announced that it will not allow the US to inspect its nuclear arsenal and facilities anymore, as laid down in the New START which is the last Arms Control Treaty, still holding between US and Russia. It may be recalled that New START which was due to expire on 5 February 2021 was renewed between the newly elected US President and his Russian counterpart, a few days before it expired and is now valid till 2026. By then the world expects these two nuclear-armed nations and China to ink a new Arms Control treaty.

The Russian decision to deny the US access to their nuclear arsenal raises fears that this last existing arms control treaty too is doomed. It is happening in the backdrop of the ongoing 10th review of the Nuclear Non-Proliferation Treaty (NPT) at the UN. In the review conference, the UN General Secretary started the conference by stating that “Nuclear War is today just one miscalculation away.

Today, the US and Russia treat arms Control and Treaty formulation as a failed, unnecessary unwise pursuit, given the increasing lethality of conventional arms, aided by emerging technologies. China too has not shown any inclination.

That Arms Control provided the much-needed security and peace to the world since the early 1970s, at the height of the Cold War and resulted in unprecedented well-being of mankind over the last fifty years seems to have been forgotten.

Ukraine war, under the shadow of nuclear coercion by Russia, the extensive military response by China against Taiwan immediately after the visit of the US Speaker of the House of Representatives and the stalemate in the ongoing talks on the Iran nuclear deal between the US and Iran, is making the world a dangerous place. This is in addition to the ongoing North Korean belligerence and the eyeball-to-eyeball contact of nuclear-armed India and China and India and Pakistan.

Now all nuclear players appear to heavily rely on “Deterrence” as the tool for the diplomacy of arms control, which raises the fears of nuclear disaster being one miscalculation away.

What is forgotten in the present arms race is that Deterrence is dangerous by design and has a track record of failure. The war between USSR and China, in 1969, in the Ussuri river region for seven months, wars in the Indian sub-continent and the ongoing supply of arms by nuclear-armed NATO to support Ukraine in its fight against the Russian invasion, in direct defiance of Russian warning to desist from doing so or face nuclear war, are clear indicators of the failure of deterrence to prevent conflict between nuclear-armed nations.

Deterrence has always been successful when it is supported by diplomacy and arms control treaties.

In the early 1980s, the need for deterrence had resulted in a five-digit holding of the nuclear arsenal by US and USSR/ Russia but diplomacy created treaties and their verification regimes, which reduced these nuclear stockpiles by over 85 per cent.

Deterrence resulted in nearly 2000 nuclear tests (including 400 in the atmosphere) but diplomacy triumphed. It is noteworthy that USSR conducted its last test in October 1990, the US in September 1992. The world did witness the last test on 3 September 2017, conducted by North Korea; an aberration.

Deterrence required a high state of readiness of the nuclear arsenal and their delivery means but diplomacy, its treaties and their verification mechanisms have ensured that this state of high alert is completely removed by providing numerous checks and balances and inspections.

After the dissolution of the USSR in December 1991, the spectre of loose nuclear bombs being hidden by newly formed States or finding their way into the hands of terrorist organisations haunted the world. Diplomacy came to the rescue and prevented such a catastrophe. Newly formed nations like Ukraine were diplomatically brought around to agree to give up their nuclear arms in exchange for safety guarantees against nuclear threats/attacks by Russia.

Diplomacy has created treaties which have prohibited nuclear proliferation, chemical and biological weapons, use of land mines, cluster munitions, and militarization of space. It has allowed sharing of nuclear technology by nuclear haves with have-nots for peaceful use of nuclear energy and in all, made the world a safer place.

However, there are aberrations. North Korean nuclear test in 2017 and the recent nuclear coercion by Russia of Ukraine are examples of flouting norms set in CTBT and NPT. By and large, norms of treaties have been respected and it is worth reiterating here that its diplomacy and not deterrence that created these norms.

History dictates that soon all nuclear-armed nations will realise the futility of disregarding the laid down norms. Wisdom will dawn on them that deterrence increases the chances of “miscalculation” and that diplomacy reduces it. The world is hoping that this wisdom does not dawn post a nuclear crisis as it did for US and USSR after the Cuban missile crisis in October 1962.

It is hoped that just as Kennedy, Khrushchev, Reagan, Gorbachev, and their predecessors had realised, the present leadership of nuclear-armed nations too will realise that nuclear wars cannot be won and therefore must never be fought. The P5 nations on 6 January 2022 reiterated the same, but their pursuit of continuing modernisation of their arsenal and now the Ukraine and Taiwan stand-offs, do not inspire confidence.

The renewal of diplomacy between nuclear-armed nations or at least the P5 has the advantage of building on existing treaties controlling nuclear arms. Outer Space Treaty of 1967, NPT of 1970, Seabed Arms Control Treaty 1971, Bio Weapons Convention 1972, MTCR of 1987, CTBT of 1996, Chemical Weapons Convention 1993, Convention on Cluster Munitions 2008, International Code of Conduct against Ballistic Missiles Proliferation (ICOC) 2002, Mine Ban Treaty 1997 are a few agreements which can strengthen and coin new ones required, especially areas like militarisation of Space and military use of emerging technologies.

The utility and longevity of existing treaties in itself is testimony to the importance of diplomacy in making the world a safer place.

In future talks, the P5 nations must give due importance to the fact of non-use of nuclear weapons in war since 9 August 1944, and that within P5 the last nuclear test was conducted way back in 1992. These two extremely reassuring trends should give them the impetus to resolve differences, and ink new and lasting treaties. The third is the longevity of NPT which has successfully curbed proliferation and today only four new countries have been added to the club of nuclear haves.

The P5 may also revive old treaties with due improvements. In that, Anti Ballistics Missiles treaty 1972 (ABM), INF and Open Skies may be considered.

With New START under a cloud, the world is staring at a scenario of the nonexistence of any arms control treaties for the first time since the early 1970s. The possibility of a new treaty soon is unlikely. Most likely it will be a trilateral agreement between US, Russia and China. In the interim, the need is to ensure that the norms within existing treaties are not flouted.

Even if arms control treaties are not forthcoming, norms to curb the nuclear arms race, if strengthened, updated and extended, will curb adventurism by existing armed nations or by new aspiring nations. Norms are easier to be extended than arms control treaties. Even if all nations are made to adhere to three norms of No Use, No Testing and No Proliferation, much will be achieved.

The US can initiate the process of strengthening norms by inking the CTBT. It may have a cascading effect with China, India and Pakistan, likely in that order, signing the treaty. Thereafter, the nation and its leader who conducts a test will live in infamy, throughout history.

To move ahead, arms control discussions should involve P5 plus India and Pakistan.  Inclusion of North Korea and Israel is not recommended as their inclusion may create more problems than benefits.

The seven nations’ talk should focus on nuclear risk reduction and norm building. Discussions on bilateral issues should be taboo and can at best be an agenda on the side-lines.  First and foremost, these seven nations should reaffirm the Reagan – Gorbachev canon that nuclear war cannot be won and should not be fought.

Even if talks on arms control do stall, talks should progress on norm strengthening to include more checks and balances on existing nuclear arsenals and their modernisation programs.

Whereas US and Russia have nuclear arms in four digits, others have it in three. Discussions will stall if US and Russia do not agree to substantially reduce their nuclear stockpile and the balance five-nation do not freeze theirs.

In the case of seven nation talks being proposed, none should be able to refuse participation under threat of penal actions which the NPT can be empowered with, in its present review. Talks should include means of delivery and their interceptors.

The nuclear peace that the world has witnessed may have become routine and mundane for some nations, now that many of the nuclear nations have non-strategic nuclear weapons. But its non-strategic nature does not guarantee a similar level of response from an adversary.  Once the nuclear threshold has been crossed in war, even if it is at a non-strategic level, the response is likely to be an escalated version.  Such escalation will only guarantee Mutual Assured Destruction – MAD.

The Cold War era witnessed a number of arms control treaties and treaties laying down norms, being coined and implemented. The world today is in a more dangerous state than during the Cold War. Nuclear peace has not been broken but then even the last arms control treaty is under threat. This is the right time to again plan for a future in which it will be hard to break nuclear peace.  Diplomacy is the key to achieving it.