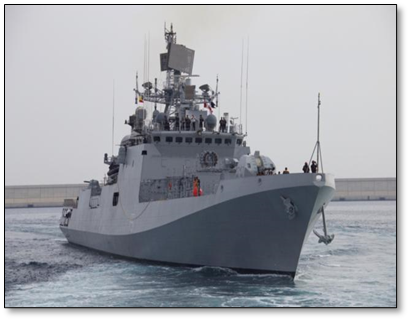 Goa Shipyard Limited (GSL) was established by the Portuguese, on 26th  November 1957 as ‘Estalerios Navais de Goa’. It started functioning under its own Board of Directors since September 26, 1967.  Over the years, this public sector shipyard has been consciously shaped, developed and upgraded to become one of the country’s premier defence shipbuilding hubs catering for maritime security requirements of the country and its friendly neighbours. Backed by a strong design house and superior quality ships, it has emerged as the fastest growing shipyard of the country.

Though the Company has come a long way since inception in terms of capability, infrastructure and expertise, it has made exceptional progress in the last few years to turnaround the fortunes of the Company.

In the last few years, the Shipyard has delivered three NOPVs to the Indian Navy, eight AOPVs to Coast Guard, two FPVs to & 11 interceptor boats to Mauritius, two AOPV to Sri Lanka, one damage control simulator each to Myanmar and Indian Navy, which amounts to delivery of 36,000 gross tonnage in the last five years. Sustained momentum of growth has led to increased production and the financial year 2019-20 saw the company’s Net worth touching an all-time high of Rs 1025 Cr.

In spite of the dampening effect of the pandemic, GSL has done exceedingly well in its production activities by delivering two OPVs to the Coast Guard ahead of schedule. The Yard also commenced the construction of the Advanced Missile Vessel Project during the pandemic. Execution of this project is expected to yield a Value of Production close to Rs. 3000 Cr by 2022.

As regards the New Generation Missile Vessel (NGMV) Project of the Navy is concerned, though the formal announcement of the Shipyard is yet to be announced by the Navy, apparently GSL has emerged as the overall least bidder.

GSL’s success has catapulted it into a league of its own with good order books and excellent execution capabilities. 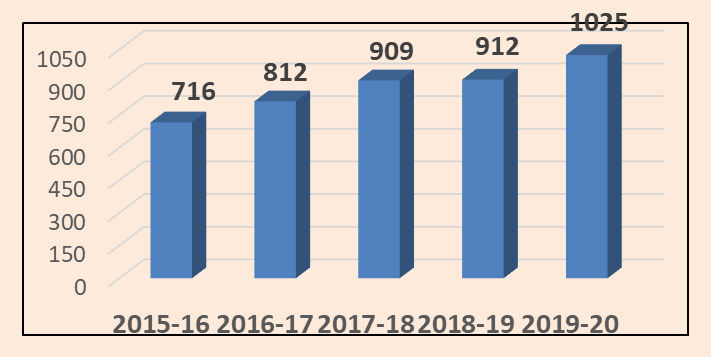 Owing to the shipyard’s modern in-house design capabilities, GSL competes with the best shipyards in its product range for fixed cost, timely deliveries and customer satisfaction. GSL has established benchmarks in terms of ‘Build Period’, which are minimum in the industry, resulting in very competitive prices. The yard has shown remarkable progress by developing the capability to undertake four to five major projects, concurrently. Delivery ahead of schedule of all ships in the last couple of years is a testimony to the Shipyard’s capabilities.

GSL has undertaken a massive modernization drive in the last few years to increase its capacity multifold and set up infrastructure for indigenous construction of technologically advanced Vessels for the Nation’s security requirements. With consistent yearly CAPEX close to Rs 100 Crore (approx), the Shipyard has created an enviable modern infrastructure boasting of 6000 T Ship lift, dry berths, outfitting jetties, outfitting workshops and storage facilities, besides unique specialized facility for construction of advanced Mine Counter Measure Vessels (MCMVs) constructed with niche FRP technology. It is the only Shipyard in South Asia to have this unique capability of construction hulls for MCMVs in FRP. Along with modernization work, the Yard has the capacity of constructing 14 ships at various stages of fabrication and outfitting at any time. 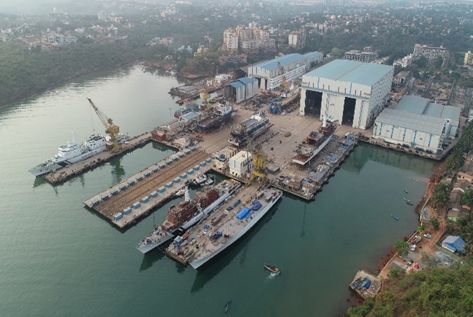 GSL has optimized utilization of its resources and capabilities by diversifying its products range and services. The yard has successfully designed and constructed technology intensive products such as training simulators, Glass Reinforced Plastic (GRP) Boats, Damage Control Simulator, Sea Training Facility and Shore Based Test Facility (for certification of Naval combat aircraft fighters). 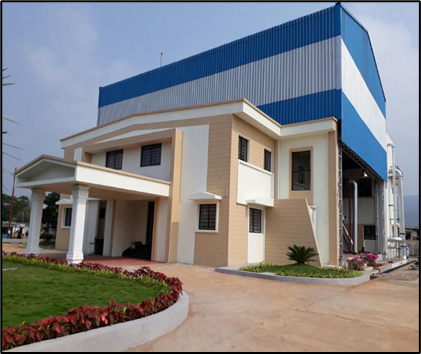 GSL has focused on emerging diversified business opportunities like Inland Waterways Authority of India, commercial shipbuilding, ship repairs, tourism etc. The Company endeavours to grow in each of its verticals by expanding its product profile aligning with the market requirements. The Company has submitted bids for many projects to maximise indigenization content, few of them being Passenger Ferry Craft for Uttar Pradesh Rashtriya Nirman Nigam, Tugs for Assam Inland Waterways under the World Bank Project and LPG Cylinder Carriers for Lakshadweep Administration. 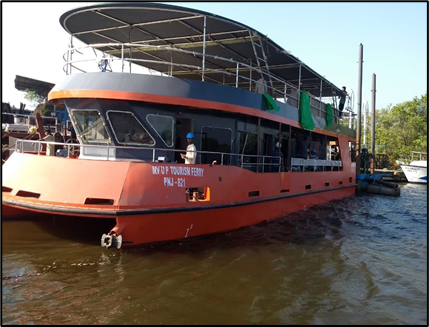 Seeking a totally new line of business in the field of Pollution Response, GSL has won the contract for construction of two Pollution Control Vessels for the Indian Coast Guard. Yard will be commencing the construction soon.

The recent award of contract by the Indian Army to GSL for construction of 12 Advanced Fast Patrol Boats through competitive bidding is a yet another prestigious project that will further diversify this Yard’s product portfolio.

GSL has made significant inroads into global market with the export of smaller vessels to Middle East, Africa and South East Asia and presently recognized as the largest exporter of Defence Vessels in India. The recent exports include 11 FIBs and two FPVs to Mauritius, one OPV to Sri Lanka and Damage Control Simulator to Myanmar with all deliveries before contracted schedule. A few future projects are also in advanced stages of finalisation.

GSL was the first DPSU to introduce “Procurement Preference Policy” in July 2015 to encourage domestic vendors for promoting indigenous manufacturing. In order to bring world class technology to India and manufacture equipment/ systems in India with significant indigenous content, GSL has collaborated with various leading OEMs such as Nevskoe Design Bureau (Russia), DCNS (SA France) and Wartsila (France SAS). GSL has also entered into MOUS with various Industry and Academic Institutions such as BEL, NBCC, L&T and IIT Goa to further boost its indigenisation and research efforts.

GSL has a well-established R&D centre, which has been recognized and registered as in-house R&D unit by the Department of Scientific and Industrial Research (DSIR), Ministry of Science and Technology, Government of India. Presently, GSL is the first shipyard to have this unique distinction of having this recognition. The Yard’s capability to innovatively design seafaring platforms has been gainfully utilized over the years to produce most potent platforms.

In keeping with the Government’s thrust for adoption of Artificial Intelligence into Defence Systems and processes, GSL has embarked upon a strategy for building a vibrant AI ecosystem with intelligent machines enabling high-level cognitive processes in its shipbuilding products and processes. As part of digital strategy, GSL in collaboration with an Industry partner, has developed a Condition Monitoring System (CMS) using Artificial Intelligence (AI) for Main Engine On-Board for Offshore Patrol Vessel (OPV). The system brings together best of engineering and data science expertise to solve the complex problem of engine health prediction. The Yard retains a continuous focus on safety and security of operations.

GSL has been entrusted with the construction of advanced missile Frigates and Mine Counter Measure Vessels with the most advanced weaponry and systems.

As a Defence Public Sector Undertaking, Goa Shipyard Limited has over the years played a significant role in the specialised field of shipbuilding, contributing in no small measure towards meeting the requirements of Indian Navy and Indian Coast Guard for sturdy and dependable vessels that would effectively safeguard the nation’s extensive territorial waters and shipping lanes.

GSL’s considerably big order books include two Advance Missile Frigate Project, six NGMVs for the Indian Navy and the envisaged MCMV project, ship refits and a few export orders in the pipeline. Commendable execution and planning skills harnessed over the years, endows GSL with the ability to continuously upgrade its infrastructure and undertake challenges that come along the way.

(The article is based on inputs received from the company)